Changes are coming to the intersection of Beach Road and Midnight Pass — but the option that was chosen by the Florida Department of Transportation is likely to have some residents, vacationers, and business owners pleased.

The state agency has nixed the most controversial option of a roundabout. Instead, FDOT has chosen an alternative that would add a modified and signalized right turn lane onto Midnight Pass, FDOT project manager David Jones told Siesta Sand. In addition, the project will also add a bike lane through the intersection, improved crosswalks with high reflectivity, as well as a signalized left turn lane onto Midnight Pass from Beach Road. The project is designed to increase pedestrian safety for beachgoers at one of the Key’s busiest intersections. 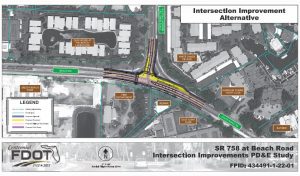 In addition to the new crosswalk across the northern leg of Midnight Pass and across Beach Road, FDOT is also considering adding a crosswalk at the southern terminus of the intersection.

The agency plans to make a presentation on the project at the upcoming Sept. 1 SKA monthly meeting at St. Boniface Church schedule at 4:30 PM in Room F and at another forthcoming public meeting during the winter season. “A lot of residents think a roundabout is still planned,” Jones said, and he wants to update the public on the change.

The alternative was chosen for two significant reasons. At $1.4 million, the cost for a roundabout was three-and-a-half times as much as the right-turn lane alternative — which is estimated to cost $403,000. More significantly for residents and vacationers, the FDOT’s analysis found that a roundabout could back up the entire intersection at certain times, Jones said.

During a set of previous meetings back in 2015, FDOT engineers were on hand to present details for three options: the roundabout; a modified and signalized right turn lane onto Midnight Pass; and a third “do-nothing” option that leaves the intersection the way it is. The overwhelming majority of the public who made comments to the state transportation agency were opposed to the idea of a roundabout.

Of 90-plus comments received, only one was not opposed to the roundabout, Jones said.

In addition to the traffic analysis and the cost of a roundabout, the FDOT’s planners also took that public input into account when making a decision on how to improve the intersection. Jones took over as project manager this past spring so he was not present at the previous workshops, but Jones believes — based on the public input submitted — that many residents will be relieved that the state is opting for a different alternative.

FDOT initially considered a roundabout as an option back in 2015 because traffic studies typically show the circular traffic devices lead to better traffic flow and safer conditions, especially for pedestrians, said Jones.

That scenario could happen, Jones explained, when a high number of beachgoers left the Siesta Public Beach parking lot, on Beach Road, at the same time, or possibly when traffic was backed up to the south from the Stickney Point Drawbridge. Motorists would neither be able to turn north onto Midnight Pass or continue on Beach Road.

Currently, motorists do not have to slow down or stop before turning, and can turn right at upwards of 30 mph. There have been 11 accidents at the intersection in the last five years, as of 2015. But there have been no fatalities.

“Right now there is a free flow right [turn] and drivers can do 30, 35 mph. Cars really don’t have to slow down when they make that right turn. We are trying to slow that down, and have them stop [when the signal is red.]… We are trying to make it more safe for pedestrians,” Jones told Siesta Sand.

The ultimate goal is to reduce speed of traffic to “make it a little more safer and make people feel comfortable walking and biking in the area,” Jones said. Construction of the project could take place as early as fall 2017, although as the design of the project progresses Jones will have a better estimate of a start date. In addition to the new crosswalk across the northern leg of Midnight Pass, FDOT is also considering adding a crosswalk across the southern terminus of the intersection.

“The majority of the comments received were against the roundabout,” resident and former president of the Siesta Key Association Michael Shay noted. That probably was a factor in the FDOT’s decision, Shay added.

When Shay first heard of plans for the proposed roundabout, he had concerns. In a February, 2015 interview with Siesta Sand, Shay said he had concerns that the roundabout would not enhance traffic flow, and would do the exact opposite. “We have enough of a problem right now, especially in season,” Shay said at the time.

In an interview last month, Shay said he wants to see the specific plans for the right-turn alternative and hear FDOT’s presentations on what they are doing before he comments on whether he feels it will be an improvement. “I feel anything they do needs to improve traffic flow and make it better than it was and make it safer for pedestrians and bicyclists,” Shay said.

News Up and Down the Trail