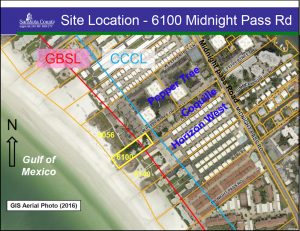 At the suggestion of Sarasota County Commission Chair Alan Maio, the owner of the property at 6100 Midnight Pass Road on Siesta Key has agreed to move a new structure with eight dwelling units completely landward of the county’s Gulf Beach Setback Line (GBSL). The original plan called for them to be 32.7 feet seaward of that line.

After reaching that agreement, the board voted unanimously on Dec. 14 to approve a Coastal Setback Variance for 6100 MPR LLC to allow a pool and deck on the site that still would be seaward of the GBSL.

“I think this is pretty much your finest hour,” Commissioner Nancy Detert told Maio. “You have brought together consensus on a very thorny issue that bothered us all. And this way, you’re happy; hopefully, the neighbors are happy. I’m happy.” As for the GBSL, she said, “That is literally our line in the sand.”

Attorney William Merrill III of the Icard Merrill firm in Sarasota said his client would have the site plan for the new construction reconfigured to incorporate the changes and then present them to county environmental permitting staff for approval. Afterward, the proposal will come back to the board for a final vote, according to the motion put forward by Commissioner Mike Moran. The board’s next regular meeting will be on Jan. 10, 2017 in Sarasota. Commissioners were not certain the issue would be handled in early January, but Maio indicated his hopefulness that that would be the case. 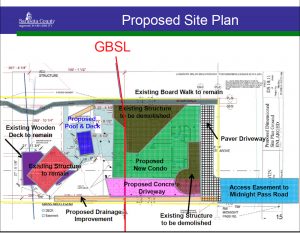 Commissioner Charles Hines earlier had suggested that something could be built on the 1.55-acre property other than the site plan Merrill had presented.

The GBSL was established in 1978, with construction prohibited seaward of it “to protect the public interests and your investment,” Weiqi Lin, a member of the county’s Environmental Permitting staff, told the board members during their Dec. 14 regular meeting in Sarasota. The GBSL, Lin pointed out, is the “100-year storm erosion line.”

His understanding of the GBSL, Hines told Merrill, is that its purpose “is to give an indication of where we don’t want to keep making mistakes like we did in the past.”

Yet, Merrill had said early in his presentation that if the board did not allow construction of the new structure landward of the GBSL, that would be an unreasonable hardship on his client.

The manager of 6100 MPR LLC is David Lehrman of Sarasota, state Division of Corporation records show. He is a Realtor and founder of the Sarasota Real Estate Co.

The limited liability corporation purchased the 46,819-square-foot parcel on the Gulf of Mexico for $4.7 million in February, according to the Sarasota County Property Appraiser’s Office. Three structures already exist on the property: a slab-on-grade building dating to 1930 and two other single-family dwellings: one dating to 1980; the other, to 1990, the Property Appraiser’s Office records show. The 1990 house has 1,119 square feet of living area, while the 1980 dwelling has 1,142 square feet. The 1930 structure encompasses 2,032 square feet of living space.

The proposal called for the two newer structures to be demolished and replaced with a building designed to be three stories over a parking area, Lin told the board.

“I hate discussing square footage and telling somebody what they should and shouldn’t build on their land,” Hines told Merrill. But in this situation, Hines asked early in the discussion, “Can they build something less and bring it back [behind the GBSL]?”

Hines added, “Here, it seems like [the client is saying], ‘This is what we want to build. This is what we can sell. … But if we can’t build this, it’s unreasonable.’”
“I’ve not said this is the only reasonable use,” Merrill replied in regard to the original proposal.

“I’m not going to draw your plan for you,” Maio told Merrill. “But something more palatable, at least for this commissioner, would have been something smaller — your preference,” further landward of the GBSL. Perhaps the pool could be moved, too, Maio suggested.

After seven people offered public comments — all in opposition to the project as proposed — Merrill returned to the podium. “I have gone back to my client,” he said. “We talked about this before the hearing. What we would be willing to do,” he continued, is pull the entire new construction landward of the GBSL, but leave the pool and deck in the plan.

Lin told the board the proposal called for the pool to be 430 square feet; the deck, 2,500 square feet. They were designed to be situated between the new structure and the 1930 house, Lin added.

That original dwelling will remain on the site, but it no longer will be occupied, Merrill said. Instead, it will be used as common space for the residents of the eight new condos.

A letter from the Siesta Key Association was among 86 communications staff received, Lin said, with 84 of them opposing the plan as originally put forward. 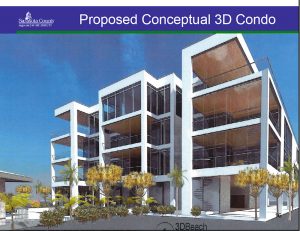 Merrill explained to the commissioners that the 1.55-acre parcel is zoned Residential Multi-Family 2, which entitles it to 13 dwelling units. Because of county-mandated front and side yard setbacks, he added, only 0.2 acres could be used for construction, and only 20% of it is landward of the GBSL.

In the 1.4-mile stretch from Siesta Public Beach to Seaside Drive, he pointed out, it also is the only piece of property that does not extend from Midnight Pass Road to the Gulf of Mexico. It has an easement on Coquille Street to reach Midnight Pass Road, he added.

The very first question Merrill took from the board was posed by Detert, who asked how long the limited liability corporation had owned the parcel. After Merrill told her the firm purchased the property in February, she replied. “OK, less than a year. And when they bought it, it [looked] the way it looks?” “For the most part,” Merrill responded.

“In light of the unique characteristics of this parcel,” Merrill said, “it would be [an] unreasonable and unjust hardship on the land to deny this variance.”

Hines asked whether specific language in cases decided in the judicial system, or a segment of the Sarasota County Code, required the board to consider the circumstances of the surrounding structures, even though they were built before the GBSL was established. Merrill finally conceded, “There’s nothing in your code that says you can’t look at old buildings, old projects, [in making a determination about a reasonable hardship].”