Two big changes are in the works for the southern access to the Key. 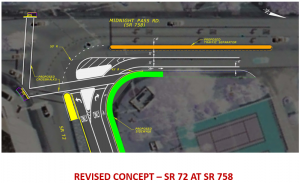 • Stickney Point Bridge underwent additional repair work last month, as crews demolished concrete on the drawbridge and made repairs. Construction work began in May to repair cracked concrete through the bridge. The Florida Department of Transportation also repaired damaged seawalls, upgrading the bridge control house, and painted and refurbished some mechanical and electrical components.

• Closer to the key, FDOT officials are proposing changes to the Stickney Point Road and Midnight Pass intersection to improve pedestrian and bicycle safety.

After hearing several complaints when at the Sept. 1 SKVA meeting where the FDOT first presented a proposal for changes at the intersection, transportation officials presented a revised option during the meeting of the SKA, on Sept. 3.

The new plan is a compromise. With the modified proposal the state agency still aims to improve pedestrian and bicycle safety, but also seeks to accommodate traffic volume and mobility.

The right turn acceleration lane onto Midnight Pass would not be removed — as was proposed in the initial design plan.

The goal is to effectively encourage drivers to take the right turn more slowly from Stickney Point onto Midnight Pass. Nandem said FDOT was also trying to address the concerns raised at the SKVA meeting that the acceleration lane is a benefit to motorists.

Commissioner Alan Maio spoke positively of the new design and said the modification — in only two days time — of the design plans shows how FDOT can work effectively to solve a challenge.

The project could be fast-tracked because FDOT would hire a contract design-build firm. However, if it cannot be completed before Nov. 1, construction would commence after this tourism season.

• As for the discussions about a possible roundabout at Midnight Pass Road and Beach Road, there has been no decision reached, FDOT officials said. But that hasn’t stopped the rumor mill.

“There is no plan on that [roundabout],” added Michael Shay, SKA President. “Only nasty rumors.”

FDOT officials have said they are considering a roundabout at that location to improve pedestrian safety. In January, officials said construction would happen in this upcoming fiscal year 2015-16 budget, if the agency moves ahead with the project.

What you see is what you get