‘Boundary hearing’ for Siesta Promenade to be held on Oct. 11 at County Commission meeting

In the morning of Oct. 11, the Sarasota County Commission will hold what is termed a “boundary hearing” on the latest proposal for the Siesta Promenade project at the intersection of U.S. 41 and Stickney 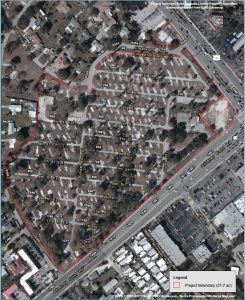 Point Road.It will follow approval of the Consent Agenda of routine business items, county staff has notified residents who live adjacent to the project site.

The boundary hearing is among initial steps necessary for the approval of a Critical Area Plan (CAP), which the owner of the property —Benderson Development Co. — is seeking so it can increase density on the approximately 25-acre site from the nine dwelling units allowed per acre under current zoning to 25 dwelling units per acre.

After the County Commission approves the boundary — or planning area — of a Critical Area Plan, a county planning document explains, staff “examines existing conditions of the area, performs studies and analyzes results, leading to recommendations on ways to implement Comprehensive Plan policies and identify solutions to concerns from the neighborhood. The Critical Area Plan is then drafted with input from the community and finalized for consideration” by the Planning Commission and the County Commission, the document adds.

In the formal application he submitted to Sarasota County Planning and Development Services staff in late August, Todd Mathes, director of development for Benderson, wrote that the company planned to pursue a project with 501 dwelling units, a 150-room hotel and 140,000 square feet of commercial space. The figure for residences had dropped by almost exactly 100 since Mathes made a presentation to Siesta Key Association (SKA) members on June 2.

Residents of the Pine Shores neighborhood — just east of Siesta Key — have engaged in a flurry of emails as they prepare for the boundary hearing, Sura Kochman, a spokeswoman for the Pine Shores Neighborhood Alliance, told SNL during a telephone interview. Kochman pointed out that the project “affects hundreds and hundreds of people — thousands of people,” not just those in Pine Shores — adjacent to the Siesta Promenade site — but people on Siesta Key and others in the surrounding area.

Many Siesta homeowners “are just beside themselves,” she added, because of the proposed Siesta Promenade residential density and fears about how that will exacerbate traffic backups, especially during 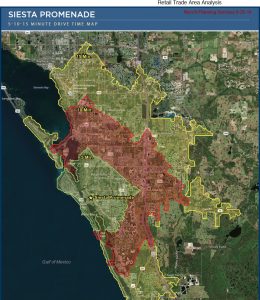 the height of tourist season. Kochman noted that county staff members have told her 145 minutes has been set aside for the Oct. 10 hearing. “They’re anticipating that there’s going to be a lot of public comment.”

However, she noted, “A lot of working people are very unhappy with that time [of day].” It is impossible, she pointed out, for “working, taxpaying individuals to attend a meeting of this importance” on a weekday morning. After the boundary hearing has been completed, Todd Dary, the county planner handling the Siesta Promenade project, has explained to Kochman that the full review process for such a project generally takes six to eight months.

During the recent interview with the SNL, Kochman made it clear that Pine Shores residents are not opposed to a development at that busy intersection of U.S. 41 and Stickney Point Road.

“They are entitled to develop [the property] for the [commercial zoning district] they are requesting,” Kochman said of Benderson employees. The request is for rezoning of the site to Commercial General, she pointed out. In such a district, she said, a maximum of 250 residences, 150 hotel rooms and 140,000 commercial space would be allowed.

What Benderson is requesting is double the number of dwelling units, she added, which is why it is seeking approval of a CAP. “We are saying, ‘No, that is not compatible with the neighborhood.’”

Kochman also noted that the plan calls for at least one six- or seven-story residential building. [Mathes told SKA members in June that the hotel also would be 85 feet tall.] “The privacy of every single home [in Pine Shores would be] compromised,” she stressed, because those people in the tall structures would be able to look down on the adjacent single-family homes.

Many people continue to have the mistaken impression that the residential buildings will be constructed along U.S. 41, she said. Those buildings will be next to the neighborhood, Mathes explained during the June 2 SKA meeting.

“You’ll be looking at a grocery store and retail” on U.S. 41 and Stickney Point Road, Kochman added — a point Mathes made during the June 2 SKA meeting.

What about all the traffic?

Although Benderson submitted a traffic study with its county application, Kochman told SNL that she and other residents maintain the undertaking was inadequate to capture the full measure of impact the project will have on the surrounding area.

The Sarasota consulting firm Kimley-Horn analyzed traffic from 4 to 6 p.m. on Thursday, March 26, 2015 and on Saturday, March 28, 2015. Mathes told the SKA members that the firm set up “continuous video monitoring of Stickney Point [Road]” on a Saturday, but the Kimley-Horn report provided to the county said its analysis covered 12 to 2:30 p.m. on March 28.

Given the steady stream of traffic onto Siesta Key from about 9:30 in the morning until 6 or 6:30 p.m. each day during the height of tourist season, Kochman told SNL, she and her Pine Shores neighbors believe the traffic study should have been undertaken for a much longer period on a weekday during the busiest part of the year.

FDOT representatives already have voiced concerns to Sarasota County staff about the traffic that would be anticipated with increased density at the location, documents show. However, county staff has responded that it cannot keep Benderson from developing the site.

As for the mix of commercial space that has been proposed, Kochman pointed out the impact online shopping has had on brick-and-mortar locations. “Dead retail is worse than no retail.” Other than the 35,000- to 40,000-square-foot “high-end” grocery store — like a Fresh Market or a Whole Foods — much of the rest of the commercial property will be a mix of services, such as dry cleaners and barbers, Mathes told SKA members.

In an Aug. 25 addendum to the application Mathes filed with the county, he wrote, “Maps with distance rings … are the simplest and most widely used method for defining a trade area. … In our case as a mix of convenience, comparison [shopping] and lifestyle/service amenities, we believe the 3-5-7 mile radius is the most appropriate segment to analyze for Sarasota.” The demographics within the corresponding 5-, 10- and 15-minute drive-time radii of the site show the plan for Siesta Promenade is suitable, Mathes added.

Among the data provided, for example, is that the estimated population this year within 5 minutes of the site is 61,066, and the estimated average household income is $89,272. The projected annual growth for the population is 1.6% from 2016 through 2021, the document shows.

Furthermore, the data says that the total retail expenditure of households within 5 minutes of the site will be $907 million this year; within 15 minutes, $3.51 billion. Benderson used census records from 2000 to 2010 to extrapolate the figures, the document notes.

June Up & Down the Trail