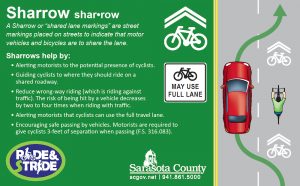 During the February SKA meeting, President Harold Ashby talked about Sarasota County’s plan to paint “sharrows” on Ocean Boulevard where no bike lane exists, to make the road friendlier for cyclists.

The approximately 825-meter stretch of Ocean Boulevard from Beach Road, through the Village, to Treasure Boat Way is the area targeted for the directional arrows, Patrick Lui, coordinator of the county’s Bicycle, Pedestrian and Trails program, told the News Leader.

Ashby had anticipated the work would be completed during this summer.

The sharrows topic arose most recently during the Oct. 11 County Commission’s discussion of paid beach parking and other transportation options for Siesta Key. Carolyn Brown, director of the county’s Parks, Recreation and Natural Resources Department, explained that the sharrows are painted on paved roads to indicate bicyclists may use any portion of the full width of a lane. She added that they would be added to Ocean Boulevard in this fiscal year, though she did not specify a timeline.

When the SNL checked with Lui on Oct. 13, he reported that the project will be completed “as soon as possible.”

The contractor the county hired to undertake the painting ended up with a backlog of work, Lui explained. Staff has been waiting “to get through their queue. … [The project is] planned and it’s funded.”

During the Oct. 11 County Commission discussion, Commissioner Michael Moran asked whether the members of the county’s Bicycle Pedestrian Trail Advisory Committee had discussed the sharrows and a proposed bike-sharing program for Siesta.

Paula Wiggins, the county’s transportation planning manager, responded that the committee members had talked about the plans. She added, “We are coordinating with our partners in the municipalities, and we are working on a scope [of work] to seek those firms that have the experience and the proficiency” to handle the bike-sharing program for the county.

She told the board that staff expects to have the draft of that scope completed “as early as this month.”

“That is great news,” Commissioner Alan Maio responded. Maio has been pushing staff to get bike-sharing programs underway in the county.

A sharing program — typically implemented for trips ranging between half-a-mile and 3 miles — entails the picking up and dropping off of bikes at multiple sharing sites. Automated kiosks and racks are installed for customers, Brown said.

During the Oct. 11 discussion, Brown further noted that residents have told staff they would use their own bikes to reach the beach if they had better ways to secure the equipment at the park. Therefore, staff plans to implement a pilot program through which it will install two bike lockers that can store two bicycles each, she said.

Bike racks also might be a good addition to the beach accesses on the island, Commissioner Maio told Brown. 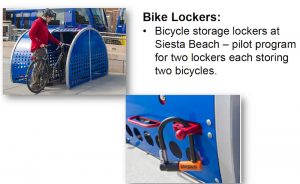