The new master pump station that will replace the Siesta Key Wastewater Treatment Plant will have triple redundancies and it will not be designed to allow any discharge into the Grand Canal, Sarasota County staff members told about 60 people during the November Siesta Key Association (SKA) meeting.

While work is underway to convert the plant to a pump station, David Cash, the county’s Water/Wastewater Division manager, explained, a 2-million-gallon water storage tank — one of the original pieces of equipment on-site — will be left in place for use in the event of an emergency. He referenced the discharge of partially treated effluent into the Grand Canal during heavy rainfall that was caused by then-Tropical Storm Hermine in late August.

The total effort that will lead to the decommissioning of the more than 40-year-old wastewater plant comprises three phases at an expense of approximately $20-million, Greg Rouse, the county’s utility asset manager, pointed out. The plant is scheduled to go offline in December 2017, though the Florida Department of Environmental Protection (FDEP) permit for its operation allows it to continue to function until June 2018, Rouse noted.

Additionally, the new facility should be much quieter and much less a source of bad odors than the current one has been, Cash told the audience. All effluent will flow off Siesta Key through a sewer force main 20 inches in diameter that will be constructed about 60 feet below the Intracoastal Waterway (ICW), Rouse explained. Upgrades have been underway at the county’s Bee Ridge and Central Sarasota treatment facilities to handle the Siesta sewage, he added.

The first on-site work people would notice, he said, was scheduled to begin on Nov. 14 and continue through December. “Residents should anticipate some noise and an increase in truck traffic on Oakmont Place.”

The work is taking place between 7 a.m. and 5 p.m., Rouse added, with none planned at night or on weekends.

Furthermore, Rouse explained, after the contractor for Phase III has worked with staff to finalize what is called a Maintenance of Traffic plan for the construction that will take place next year, another community meeting will be held.

The third phase also will entail running the new sewage force main from South View Drive along Midnight Pass Road to Shadow Lawn Way and then along Shadow Lawn Drive to the treatment plant. That segment is scheduled to begin in September 2017.

It probably will be a year after the new master pump station is up and running before the equipment and tanks for sewage treatment are decontaminated and demolished, Rouse told the audience. The demolition work is not part of the three-phase project.

Cash noted that the Siesta plant is the last surface water discharge facility in Sarasota County. The treated wastewater flows into the Grand Canal and ultimately into the ICW, he said.

After Rouse provided an overview of the facets of each phase, Cash reminded the audience that, following a considerable number of complaints about odor at the wastewater plant in the spring, the county worked with a consultant to analyze potential mitigation efforts. As a result, he said, equipment was repaired and cleaned. The situation improved, he continued, but after hearing lingering concerns in June and July, county staff “opted to add a chemical feed system” to suppress the odor of the hydrogen sulfide gas at the plant, which is the major source of those bad smells in the neighborhood.

Since then, Cash said, “We haven’t had as many complaints.” And because of the discharge into the Grand Canal that was associated with Hermine, Cash pointed out, “We have committed to using all means necessary” to notify the public right away if such a situation should arise again. Because the decommissioning of the plant is not planned until December 2017, he added, the facility will be in use through another rainy season.

Although the chance that a pipeline will fail “is a minimal risk,” Cash explained, staff would like to put some permanent measure in place at the new master pump station in the event of an emergency. “It’s another insurance policy.” A hospital-grade generator that can run on electricity or fuel will be installed on the site, Rouse noted. When Siesta Isles resident Lorie Tiernay asked about the failure rate for pumping stations, Rouse replied that a wide variety of types and sizes of lift stations are constructed. “This is what we’d almost call a ‘mega master,’” he said, as it has been designed to handle the flow from six other lift stations.

A system called a “hot backup” begins working immediately, Rouse explained, if one of the two primary pumps ceases functioning for any reason. Diesel fuel will be kept on-site for the generator in the event it is needed and the electrical system is down, he added. “If there was Armageddon, and it really failed … could raw sewage be dumped into the canal?” Tiernay asked. “It’s highly improbable that will happen,” Rouse told her, though he said he could not rule out “an Al Qaeda strike.” He has been working with the county for 13 years, Rouse continued, and he never has seen a master pump station fail. Cash added, “We’ve got as much redundancy as we could possibly have.” Nonetheless, Cash continued, if a Category 5 hurricane were to strike Siesta Key, “that might be a different story.”

As for the site itself after the project has been completed, Cash explained that no decision has been made about use of the remainder of the approximately 5-acre parcel; about two-thirds of it will be vacant after the demolition of the old equipment has been completed. “The [County Commission] has the opportunity to get feedback from the community … and decide how to use the site.
County Commission Chair Alan Maio pointed out, “We will try our best to maintain it as a park and not sell [the property].” 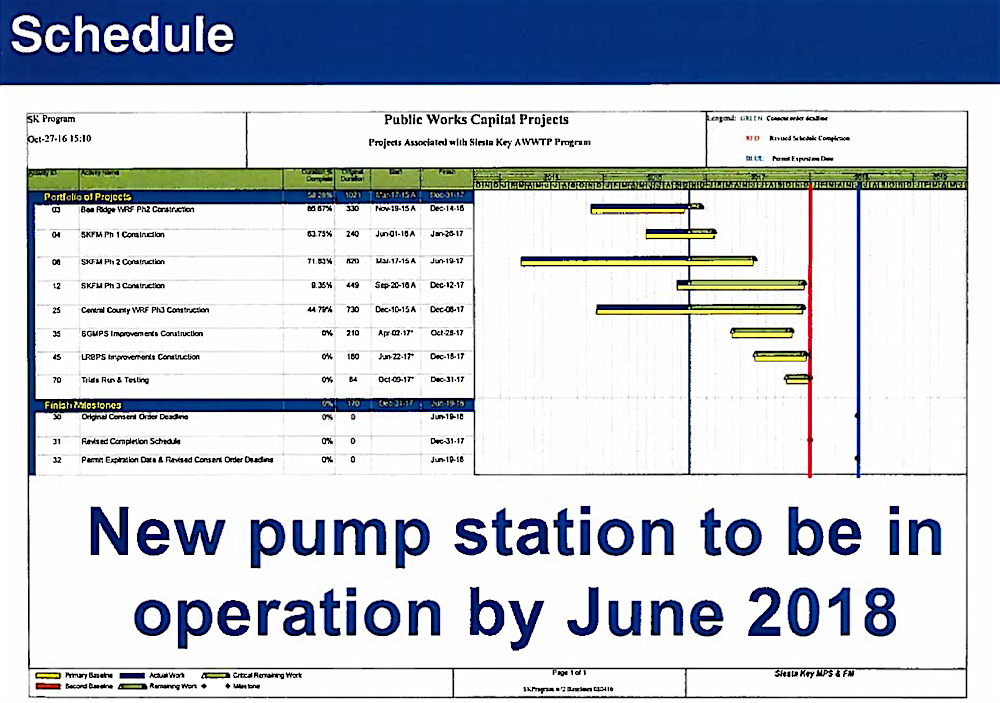 What’s New Beyond the Bridges: September