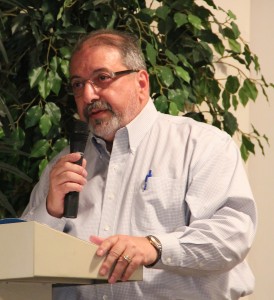 The topics ranged from the Lido Beach Renourishment Project to Benderson Development’s plans for the property it owns at the northwest intersection of Stickney Point Road and U.S. 41 as Sarasota County Commission Chair Alan Maio addressed about 70 members of the Siesta Key Condominium Council on Jan. 19 at Siesta Key Chapel.

First, however, Maio talked about the aftermath of the EF2 tornado that hit the Key at 3:17 a.m. on Jan. 17, with a peak wind speed of about 132 mph, according to the National Weather Service.
“It was a well-trained, well-placed continuous response [on Sunday],” Commissioner Maio said.

The tornado touched down on the beach, he explained, and swept past the Excelsior Beach to Bay Gulf-side buildings and the adjacent Crystal Sands condominium complex before crossing the street and traveling over the bay, where it hit three streets before dissipating in the immediate area of the Encore Motorcars of Sarasota, located at 6000 S. Tamiami Trail, and Sarasota Memorial Park.

On Baywinds Lane, one woman was in bed on the second floor of her house when the roof began to cave in over her bed, Maio pointed out. She was able to roll onto the floor, he added.

The Fire Department has “a big rubber inflatable bag, if you will,” he continued, that a crew maneuvered into the house to use in lifting the roof; then firefighters were able to rescue her. The woman’s husband reportedly was on the first level of the house, Maio said.
Later, Maio said, a team went back to the house to rescue the couple’s dog.

Walt Olson, president of the Siesta Key Condominium Council, told the audience that only the nine units without hurricane-resistant windows in the most seriously damaged building on the Gulf side reported shattered glass from the tornado. He added, “The grounds themselves got beat up pretty bad,” and that damage is not covered by insurance.

Proceeding to the updates he had been asked to provide the Condo Council members, Maio first reassured everyone that Florida Department of Transportation (FDOT) plans unveiled in early 2014 for a roundabout at the intersection of Beach Road and Midnight Pass Road appear to be firmly on hold.

When FDOT held a public meeting in March 2015, which was “extremely well attended,” Maio noted, a clear majority of attendees opposed the project. Afterward, he said, state agency staff members dropped the proposal. “They promised me that they would call me if it gets any life back to it,” Maio added.

“They are going to change the orientation and angle of the pedestrian and bike crossing,” he explained.

As for the Benderson property at U.S. 41 and Stickney Point Road: Although the county received pre-application materials from the firm 19 months ago, Maio said, no application has been submitted for a rezoning, which, he added, he would expect for the site. More neighborhood workshops will be necessary, he noted, before any project can proceed on that property.

During a question-and-answer period after his remarks, Maio said, “Something nicer than all those vintage ’50s tin cans is going to go there.” He was referring to the Pine Shores Estates mobile home park that previously occupied the parcel.

“I always suggest to people … to engage Benderson Development,” Maio continued, encouraging concerned residents to call the firm’s corporate office on University Parkway and ask to speak to the manager of the Stickney Point/U.S. 41 project.

A third person in the audience protested that if Benderson constructs a hotel on the site, that will mean even more traffic, “and already [vehicles are] backed up to the other side of [U.S.] 41 in high season” as they head to the Key via Stickney Point Road.

“They’re going to have to submit a traffic plan,” Maio said of the Benderson Development employees, cautioning that the County Commission would get sued if it denied Benderson the opportunity to put a project on the property.

Worries about the Lido project

Regarding the Lido Beach Renourishment Project, which calls for the dredging of Big Sarasota Pass — an undertaking that never has been done — Maio pointed out that the City of Sarasota is working with the U.S. Army Corps of Engineers (USACE) on the plans to put more sand on significantly eroded Lido Key Beach. After county staff receives responses it has requested from the city and the Florida Department of Environmental Protection (FDEP) on the peer review for which the County Commission paid $49,620, the commission will hold a public discussion of the document, Maio told the audience.

“You have my word: [We] will constantly monitor this,” he added of the $19-million project, as FDEP continues its review of the permit application from the city and the USACE.

Maio pointed out that public protests of the original proposal for three groins on South Lido — to hold the new sand in place between nourishments every five years — resulted in the USACE eliminating one groin from the plans before it submitted the permit application to FDEP. The USACE also reduced the size of the other two.

Another man noted that the South Siesta Renourishment Project involves dredging of sand 9 miles offshore. If that source is suitable for Turtle Beach, he said, why are the city and the USACE determined to dredge Big Pass?

“I bet commissioners are asking those very questions,” Maio replied.

On a side note: Maio said that the South Siesta renourishment is scheduled to begin in March, though it must be completed before sea turtle nesting season begins on May 1.

In response to another question on the Lido project, Maio said he is not sure scientists have a solid answer to the question of what would happen 15 years after the dredging of Big Pass began, especially with multiple sand-removal initiatives called for over a 50-year period. (The USACE says some dredging would take place in New Pass for the Lido project over that 50-year span.) Moreover, Maio noted, no one has supplied an answer thus far to the question of who would be responsible for remedying any damage that might occur as a result of the city and USACE’s project.

On Sept. 9, the beach condition signs on all 16 beaches in Sarasota County were changed to “Enjoy the Beach” from “Red Tide Present,” according to Sarasota County. This comes after all beach water samples taken Sept. 7 by the Florida Department of Health-Sarasota came back showing zero cells of Karenia brevis present.  The signage at the […]

Save Siesta Key nearing petition goal; board member steps aside

With a Sept. 30 presentation planned before state officials, the Save Siesta Key incorporation team is making a final push for petitions of support. As of Sept. 9, the group had collected 1,735 petitions. Its goal is 2,000. Petitions are available for download at savesiestakey.org and can be signed by residents, property owners, or business […]

The Sarasota County Planning Commission on Sept. 2 voted 7-2 in support of the special exceptions requested by an applicant hoping to build a seven-story, 120-room hotel on Old Stickney Point Road. The exceptions allow height increases beyond the current 35-foot limit for the hotel to be 83 feet and a five-story parking garage across […]