Administrative challenges the Siesta Key Association (SKA) and Save Our Siesta Sand 2 (SOSS2) filed in response to the state’s plan to issue a permit for the dredging of Big Sarasota Pass remained on hold in late February.

That resulted from the SKA’s Jan. 19 filing of notice with the Florida Department of Environmental Protection (FDEP), the U.S. Army Corps of Engineers (USACE) and the City of Sarasota that it planned to file a complaint in the 12th Judicial Circuit Court over the FDEP’s Dec. 22, 2016 Notice of Intent to issue the permit — unless the FDEP, the city and the USACE took appropriate steps to remedy issues the SKA has called into question regarding the permit application.

In the meantime, on Feb. 7, the Sarasota County Commission asked County Attorney Stephen DeMarsh to research the county’s boundaries in response to an assertion by the SKA that areas the City of Sarasota and USACE propose to dredge in Big Pass are within the county’s territorial limits.

Robert Luckner, a member of the SKA’s Environmental Committee, and Catherine Luckner, vice president of the SKA, appeared before the County Commission during its regular meeting on Feb. 7 to reiterate points in the draft complaint the nonprofit released in January. 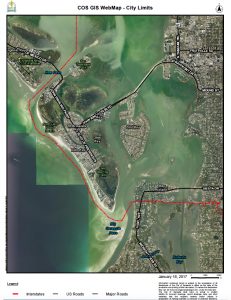 Robert Luckner characterized the primary issue as “a Comprehensive Plan problem,” providing the board a map and other documents to illustrate his remarks. The county’s Comprehensive Plan — updated in 2016 — includes Environmental Policy 4.6.1, he noted, which says the county shall “Prohibit dredge and fill activities in the Gulf of Mexico, bays, rivers, and streams of the county except to maintain previously dredged functional navigation channels and drainage canals.”

Big Pass, he continued, “has not ever been previously dredged.”

The USACE’s own map — included in its permit application submitted to FDEP in March 2015 — shows Borrow Area B and parts of Borrow Areas C and D “are clearly outside the city limits, and, we allege, are covered by the county’s Comprehensive Plan,” Luckner added.

The letter accompanying the copy of the draft complaint that the SKA’s attorney, Kent Safriet of the Hopping Green & Sams firm in Tallahassee, sent to the FDEP, the city and the USACE “is essentially an attempt to find a remedy that all of us can live with,” Catherine Luckner told the county commissioners on Feb. 7.

“Weekly,” she continued, “we check with the FDEP [and county staff].” As of the previous evening, she said, the county staff member she spoke with had verified that the county still had not been contacted by city representatives, seeking permission to dredge Big Pass.

Catherine Luckner emphasized — as she has countless times over the past several years — that the SKA wants to see Lido Key renourished; the nonprofit organization’s concern, she added, is protecting Siesta Key.

Later on Feb. 7, Commissioner Charles Hines said he found it a source of concern “any time somebody tells us we’re violating the Comprehensive Plan.” When he asked County Attorney DeMarsh about the Luckners’ statements, DeMarsh reminded him of the report staff had provided the board in advance of its first meeting of the year, on Jan. 10. Staff’s view is that the county’s Comprehensive Plan has not been violated because it does not apply to the proposed Lido Renourishment Project, DeMarsh added.

“I think the gist of what [the Luckners] are saying is not we, but the City of Sarasota permit application violated Sarasota County’s Comprehensive Plan,” Commissioner Alan Maio pointed out. Prior to earlier County Commission discussions, Maio continued, he had not seen the maps to which the Luckners had referred in making their argument. Yet, it appears that 80% of the area proposed for dredging is within the county’s boundaries, he added. “I presumed [beforehand] that it was state sovereign lands …”

Maio told his colleagues, “This is exactly why the commission unanimously voted for an [Environmental Impact Statement on the Lido project], so these type of discussions and these type of interactions [with the city and the USACE] would take place.”

The vote approving the request for the Environmental Impact Statement (EIS) came on Aug. 23, 2016, at the SKA’s request.

Yet, the county board’s request was “just summarily rejected,” Maio reminded his colleagues. “Nobody wants to do any harm to Lido. We’ve said that over and over again. We all have said individually and as a group, ‘Where is Plan B?’ And there never was a Plan B.” The city and the USACE could have sought a permit for the removal of 50,000 cubic yards of sand from Big Pass, for example, Maio continued. Instead, the application seeks the dredging of about 1.2 million cubic yards of sand to renourish the approximately 1.6-mile stretch of South Lido.

Finally, DeMarsh told the board, “We’ll be glad to take a look at that.”

The status of the legal issues

Just a few days earlier, Catherine Luckner told about 80 SKA members during their Feb. 2 meeting that representatives of the nonprofit were in discussions with FDEP regarding the draft complaint prepared for the Circuit Court. The SKA’s notice of its willingness to file suit, she said, essentially had stopped plans for the dredging of the pass.

“It’s very possible we won’t need to have an administrative appeal,” she added.

In a telephone interview with Kent Safriet, the SKA’s attorney, emphasized that the main question “is do the city and the Corps have to get the permission of the Board of County Commissioners to dredge the areas of the project?” Based on his and the Luckners’ research, he said, the answer is, “Absolutely.”

He continued, “Assuming we’re right, and assuming [FDEP] agrees with us, the question is, Do the city and the Corps go to the county now and obtain permission” or hear rejection from the commissioners?

If the city and the USACE asked for a formal response from the county, Safriet said, the county’s answer would tell everyone “if this project needs to be changed from a design standpoint.”

The process of going through state administrative challenges, he added, “is very expensive.” Therefore, it makes sense to have the city and the USACE take that step with the county first.

FPL burying power lines in one neighborhood on Siesta Key