Dressed in shorts, a colorful shirt, and sandals, Bob Stein is easily mistaken for a wayward snowbird

or tourist. Some that attended the Siesta Key Chamber of Commerce Awards Ceremony at TPC Prestancia can be excused if they jumped to that conclusion when he showed up in his trademark “Florida casual” attire.

But once the assembled chamber members recognized him they understood. That’s just Bob. The energetic publisher of the Siesta Sand left the buttoned down corporate world years ago. He’s living on “island time” now, even if there seldom seems to be enough of it to get to everything he wants to each day.

Even at the awards dinner he was still on the job, taking pictures, talking to friends, looking for news leads for the next edition of one of the four newspapers he publishes with his wife and business partner Emy.

His eyes light up when talking about the latest happenings on the island. “Somebody said they saw a crocodile in the Grand Canal,” he says. “Can you believe it?” Then there’s the recent report of a rave party – clothing optional – at the pavilion after the drum circle broke up on a recent Sunday evening. Cell phone videos of the revelry prompts Stein to quip, “What happens on the Key doesn’t always stay on the Key.”

“There’s no such thing as small news in a small town,” he notes. Running down the latest rumor is one of his greatest joys. It shows in the boyish grin that makes him appear younger than his sixty years. “I laugh when I hear the “industry leaders” insist that print is dead. I can read about things on my phone, is what I hear.” says Stein. “Somebody still has to report the hyper-local news and get it out to the locals for you to read about it on your phone.”

But the news this evening at the awards dinner would take Stein totally by surprise.

“It had been a long day and I was getting tired and thinking of cutting out early,” he said in a recent interview. “But I’d given my camera to Trish Johnson-Ivey (of Fresh PR & Marketing) to take some pictures. But now she’s up front, presenting an award, so I had to wait until she finished.”

So Stein takes a seat. Then something Ivey says catches his ear.

“If you’ve seen this person around town, always in shorts, you might think he’s a tourist but in fact he’s hard at work; he’s always on the move. He’s heavily involved with almost every civic group on Siesta Key…”

Uh-oh, Stein thinks to himself, slowly realizing where this is going amid chuckles and glances his way from the audience.

The normally effusive Bob Stein was caught off guard, rendered momentarily speechless, by the spotlight now fixed squarely on him.

Later, after hearing he had nearly bugged out before receiving the award, Chamber Executive Director Debra Lyn-Schmitz joked: “He wouldn’t have made it to the door. I would have tackled him before got near it!”

She said the qualities the chamber looks for in the award winner include community involvement and chamber activity. But beyond that, there’s something more.

“The chamber wants the person who best represents the spirit of Siesta Key,” she explained.

That spirit clearly animates Stein. He loves living and working on the Key, saying he first came under its spell in 2007 while still caught up in the corporate grind he is now so grateful to have left behind.

“I was working for Journal Communications (parent company of The Milwaukee Journal) at the time” he said over lunch at the Alpine Steakhouse on the South Trail.

“They owned the Pelican Press then as well as some other publications in the area. I would fly down and stay at our rental place on Ft. Myers Beach, then drive up to the publications I oversaw in my role as Operations Director for their Community Publishing Group.”

The Pelican’s office was located near the Village. In a Siesta minute – island time – Stein was hooked. “From my first trip I thought: what a great place this must be to live and work.

In 2010, the Steins sold their holdings in Wisconsin and moved to their rental property on Ft. Myers Beach, always with an eye toward Siesta Key. As fate would have it, a small quarterly publication was brought to Bob’s attention just after he accepted a position with Seabreeze Communications in Ft. Myers as the General Manager.

In conjunction with Bob’s full-time job at Seabreeze Communications, the couple decided to 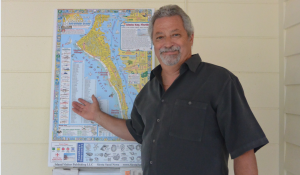 purchase the Island Visitor, the colorful quarterly Siesta map publication that guides tourists to all the retail shopping and dining spots on the Key, with its breezy, easy to follow layout in addition to purchasing a single family home on Siesta Key.

“Emy moved to the Siesta house, working on our newly acquired business, while I continued working at Seabreeze. On the weekends, I’d drive up to Siesta helping develop the product and getting acquainted with the business community.” he said.

It was a modest start, but it gave them a beachhead on the island.

With the knowledge gained during his time at Seabreeze, Stein began to publish the monthly publication for the Del Tura community located in N. Ft. Myers and The Landings Eagle, located in Sarasota. Last year they added a fourth paper, The Columns, covering Tara Woods near Ft. Myers.

Stein’s knowledge of the industry started in the late 1970’s in Wisconsin where he developed a successful group of newspapers and shoppers that blanketed the city and suburbs of Milwaukee with a combined circulation of 135,000. Thompson Newspaper Group took note of his success, buying Stein’s Shopper group in 1995.

But since then, aside from owning and managing rental properties, Stein had missed the excitement and freedom of working full-time for himself.

It was also in 2012 that the couple stretched their original business model beyond products tailored exclusively to gated communities; they decided to expand by launching a new publication covering Siesta Key and adjacent mainland neighborhoods.

Their decision was prompted in part on Dr. Stephen Leatherman (a.k.a. Dr. Beach) naming Siesta the nation’s top beach in 2011.

“We decided the time was right,” said Stein, adding that they hoped to capitalize on the attention the top-beach award would bring. It also gave them the name for their new paper, Siesta Sand. “It is why the world comes to Sarasota”. Stein stated.

Stein currently prints between 13,850 to 17,000+ copies of Siesta Sand each month, based on time of year, mailing a copy to homeowners on the Key along with 8 postal routes on the mainland. To ensure complete saturation, 200+ additional drop points and newsstands are maintained throughout the month.

“It’s more expensive to mail, but it’s the right way to go in an area like this,” he explains. “So many people with homes here are away in the summer or travel a lot. They don’t want papers piling up, which is what you get with free papers thrown on driveways, advertising no one is home.”

So far the new venture has worked out well for the couple. Siesta Sand has been well received for its focus on the Key. Both Bob and Emy work hard, but they are grateful to now work for themselves.

And they’ve finally realized that dream of living and working on Siesta Key.

Being named Business Person of the Year? That’s a true honor, says Stein. But living on island time…That’s an award that comes each and every day.

“Siesta is a small town,” he says. “This is my hometown now and I want to make sure it’s looked after to keep that small town feel.”

And best of all?

“I get to wear shorts and sandals to work every day,” he says with a smile. “What could be better than that?”

Bob is currently the 1st Vice president for the Siesta Key Association, a board member of the Siesta Key Chamber of Commerce chairing the income producer, Visitors guide and Maps. He’s also a Chamber member and SKVA member, attending all the Siesta Key Village Association meetings.

From bridges to beaches, county improvements planned for Key