If you ask most Americans what their fondest summertime treat was growing up, chances are ice cream will be at the top of their list. And, most will say they preferred the ice cream parlors over the grocery store variety.

It’s interesting to note that ice cream’s popularity has made it an American Symbol even though it predates the birth of this country. So, where exactly did it come from? Let’s take a brief look at its fascinating and somewhat disputed history.

Although Emperor Nero is credited with the first frozen dessert, some believe it dates back even further,  evolving from cooled wines and flavored Ices in Persia. These Iced wines were popular with Alexander the Great (356-323 BC) and later with Roman high society. In 62 AD, the Roman emperor Nero sent slaves to the Apennine Mountains to collect snow to be flavored with honey and nuts.

Others would argue that the emperors of the Tang Dynasty (618-907 AD) were the first to come up with a version that more closely resembles the ice cream we grew up with. Their version was made from goat, buffalo or cow milk and heated it with flour. Camphor, a naturally occurring aromatic compound was used for flavoring, then the mixture was placed into molds and lowered into an ice pool until frozen.

So when did this tasty treat make its way to America? Most references attribute it to the European settlers in the early 1700’s who brought their ice cream recipes with them.

The first ice cream shop in America opened in New York City in 1776 and in the summer of 1790, it’s purported that our first president, George Washington, spent $200 to satisfy his craving for it. Thomas Jefferson was the first to serve it in the White House in 1802, and James Madison wanted to impress his guests so much that he had ice cream served to his guests at his inaugural ball.

Ice cream was first sold in grocery stores in the 1930s. World War II further popularized the dessert as the treat was great for troop morale and became somewhat of a symbol of America at the time. President Ronald Reagan loved ice cream so much that in 1984, he declared July “National Ice Cream Month”. Now who can argue with that?

Only two questions I’d ask is why wait until July? And, why not make every month “National Ice Cream Month” here in Sarasota? After all, our type of weather begs for a cool treat yummy enough to put a smile on even the grouchiest of grouches any day of the year.

With that in mind, the following shops we’re highlighting will help put your monthly, weekly or, dare I say, daily indulgence on the right track and sooth that inner grouch. We’ve asked each shop to share their popular flavors and what makes their brand so popular.

SubZero Ice Cream & Yogurt, located in the Village on Siesta Key has a unique way of making 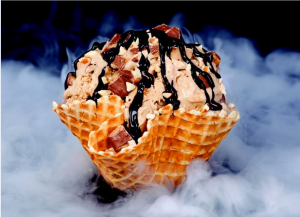 their tasty treats. Owners, Jill and Doug Shenk, say, “At Sub Zero Ice Cream & Yogurt we use liquid nitrogen to individually flash freeze ice cream. Choose your liquid base and create your own custom flavor, or indulge in one of our 12 customer-favorite Sensations. Then watch the clouds billow as we freeze your ice cream in seconds, resulting in a smooth and creamy sweet treat”.

Because it is made to order, they offer an almost endless variety of flavors in all of their gluten-free bases. Choose from Premium Ice Cream, Custard, Low fat, fat-Free Yogurt, No Sugar Added, Lactose Free, and Vegan Almond. They also serve smoothies and shakes. Stop by, experience the magic, and revel in the fresh, distinctive, delicious Sub Zero difference! Their top three sellers are:

Orange Octopus, located in Captain Curt’s Village, uses a simple tried and true approach. Owner, Kim Bennaji, takes pride in using the highest quality ingredients. “Our local creamery is always churning out the freshest recipes to tantalize your taste buds.” Their ice cream is made to “super premium” standards with the best ingredients, resulting in the creamiest and most 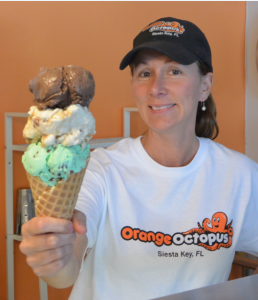 delicious treat a smiley face can serve you.

They offer 28 flavors to choose from along with an assortment of sundaes and milk shakes. If a caffeine kick is what you’re after there is a full espresso bar for cold and hot drinks as well. Their top three sellers are:

Abel’s Ice Cream, located just over the Stickney Point Bridge in the South Bridge Plaza, offers a selection of 38 flavors including two frozen yogurts, two no sugar added a sorbet (non-dairy product) plus a sherbet. 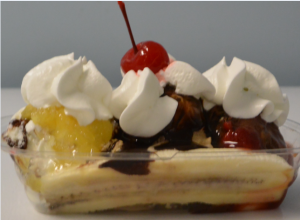 The secret to their unbeatable taste of the Artisanal Style Ice Cream and Yogurts is synonymous for large quantities of oversized inclusions throughout the product along with the many creative and unique flavors. The brand is produced in the original way ice cream was made, Vat Pasteurization. This process allows them to pasteurize the Ice Cream Mix at a lower temperature over a longer period of time which in turn naturally imparts a great caramelized taste to the sugars in the Ice Cream Mix. This process takes longer and is less automated, but the end result in the taste of their ice cream and yogurts makes it worth it. In addition, this process also has the benefit of preserving the integrity of the ingredients. The many awards they’ve won is a testament to the quality of their product. Their top three sellers are:

McClain’s Ice Cream & Superior Yogurt, is located in the Gulf Gate Shopping area. McClain’s Ice cream has been serving the Sarasota community for more than 20 years. This family run operation continues to make their ice cream the old fashioned way. Each batch is still hand-churned and made to order. Batches are kept small to ensure freshness. And, generous scoops are a given. Frozen yogurt options are also available. Be sure to visit them at their new location on Superior Avenue, next to Monk’s Steamer Bar, and use their dollar off coupon on page 25. Top three sellers for McClain’s are: 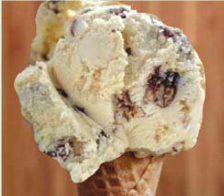