Benderson Development is again modifying plans for its large scale, mixed-use Siesta Promenade project for vacant land that was once a mobile home park at the northwest corner of U.S. 41 and Stickney Point Road. In an attempt to address neighborhood concerns, the development company has put together an alternative plan comprised of fewer overall residential units, shorter buildings bordering the adjacent residential neighborhood, and two smaller hotels instead of one, taller hotel. 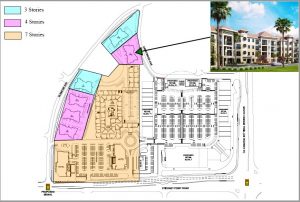 The plan shrinks overall residential units from 586 to about 400, Todd Mathes, director of development at Benderson, told Siesta Sand. The commercial aspect of the project is unchanged.

In the alternative plan, residential buildings bordering the nearby neighborhood of Pine Shores would be three and four-stories tall — instead of the 85-foot tall building in plans revealed this spring and submitted to the county. In the alternative plan, one 85-foot building is positioned towards the center of the property, further from existing homes. A single, 85-foot tall hotel would be replaced by two hotels of smaller scale but the total number of rooms would increase.

Mathes said he’s hopeful this new plan will win the support of neighbors, especially those in the nearby Pine Shores Neighborhood, the residential area behind the new development — where concerns have been voiced about the amount of traffic the center would produce in an already congested season, and scale and privacy issues. “We are leaning towards the second [alternative] plan with the lower heights and density,” Mathes said.

But ultimately, the level of community support will drive whether the development company changes course and pursues the alternative. “It’s a question of whether the neighborhood is open to supporting that,” Mathes told Siesta Sand in an interview Sept. 22. “The question right now is should we just stick with the 586 [density] or is this alternative plan that we worked on, is it supported by the neighborhood?

“It seems that Benderson is moving in the right direction by reducing the number of residential units,” Kochman said in an email to Siesta Sand. “I feel that we are not quite at the point where the entire unit count across the site is low enough, as the hotel room count increased. Also, the 85 foot height remains on the plan for the largest residential building.” In addition, Kochman said traffic concerns remain.

The 24-acre site was formerly the site of a gas station and 300 mobile homes, along with 13 streets that cut through the property. It has been vacant for some time.

This is not the first time plans for the large project have been modified. Plans for Siesta Promenade were initially proposed in 2014, and this spring Benderson revealed new plans that decreased the total proposed commercial development by more than 100,000 square feet.

The commercial aspect of the project remains unchanged. Plans call for the lifestyle center to include 140,000 square feet of retail, including an upscale grocery store. The largest retail space would be filled by an upscale, healthy grocery store, along the lines of The Fresh Market or Sprouts Farmers Market, Mathes said. Benderson has been in talks with one potential grocer but declined to name the store at this point in the process.

Representatives for the developer have been meeting with local residents, from representatives of the Pine Shores Neighborhood group to board members of the Siesta Key Association, and the Esplanade by Siesta Key to discuss the project, and Mathes said he plans to continue to meet with nearby residents, including a meeting with the Pine Shores Neighborhood in October, to share specifics of the alternative plan. “We are talking a lot to everyone affected by project,” Mathes said.

Concurrently, the developer is continuing to seek county approval for a "Critical Area Plan," or CAP, designation for the proposed Siesta Promenade, which would clear the way for an increase in density.

On Oct. 11, the County Commission will discuss and vote on the CAP. But that step in the approval process focuses mainly on the designation of the CAP boundary area, Mathes said. The Critical Area Plan clears the way for a density level above 13 units an acre and increased height of buildings.

Parking in 12 Beach Road spaces to be restricted from midnight to 5 a.m.