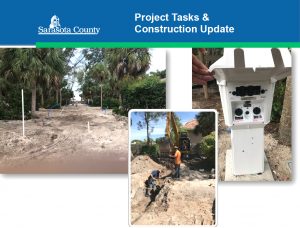 Although Hurricane Irma delayed the completion timeline from Oct. 1 to Nov. 1, the Sarasota County project to move power and telephone lines underground was well underway at Turtle Beach Park, Manager Kyle Carson told about 35 people during the Oct. 5 meeting of the Siesta Key Association (SKA).

Additionally, infrastructure that will enable guests to enjoy cable TV and Wi-Fi also is being put underground, Carson explained, and new sewer equipment is being installed.

On a unanimous vote on July 12, the County Commission approved the $1,050,000 cost of the project, with a staff memo in the agenda packet noting that the water and sewer lines and electrical equipment date to about 1970.

The county “inherited all the original infrastructure” when it bought the property in 2006, Carson explained, “including the bathhouse in its current condition.”

He further noted that a lot of that old infrastructure at the campground was made of metal. People who have lived on Siesta Key for some time probably have “learned the hard way,” he continued, that “[metal] doesn’t work well right here on the Gulf.”

All the water and sewer lines also were being removed and replaced, Carson pointed out. Workers were installing pedestals that are “marina-grade,” he added. Constructed of a type of plastic, he said, they have a coating that will help them withstand the environment. A guest will find all the hookups the guest needs right on the pedestal, he noted.

"A lot of new plumbing” was added to the bathhouse, as well, Carson continued. That facility has showers and a washer and dryer for campground guests to use, he pointed out.

After all the work was completed, he said, the driveway would be resurfaced.

Although he did not elaborate on the damage from Hurricane Irma, Carson did tell the audience, “We’re pretty excited to get back open.” He and the other staff members are used to being outside most of the time, he added; instead, they mostly have had to stay in the office located near the Midnight Pass Road end of the campground.

In her introduction of Carson, SKA Vice President Catherine Luckner noted how rare it is to find a campground adjacent to the Gulf of Mexico. 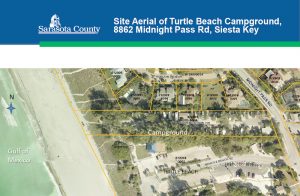 “That is what makes us so unique,” Carson agreed. “We are the only campground in Southwest Florida that has direct beach access,” though plenty advertise that they are on the water. “Either a major road [blocks] them” from direct access,” Carson said, or they are on an inlet.

The campground also has a direct path to Turtle Beach Park, he noted.

At the beginning of his presentation, Carson explained that for about six years before he came to Sarasota County, he managed the Rocking Horse Ranch Resort, which is in the Hudson Valley of New York State. “It was a great facility there,” he added, but “I needed a little bit more sun.”

He told the audience, “I got here literally a year and a day ago.”

In discussing Turtle Beach Campground in general, Carson pointed out that guests come from all over the United States and from abroad. More than a few of them first visited the facility when they were children, he said, and they have started bringing their grandchildren. “We have incredible occupancy … throughout the year.”

One of the original staff members at what was called the Gulf Beach Campground, before the county purchased the property, still works with him, he said. “She’s a great resource.”

The campground has 39 sites, he continued; among its major draws are that “it’s quiet [and] very small; it’s quaint.” The total piece of property is “not even 2 acres,” he pointed out.

Even before the upgrades, Carson noted, the campground offered full hookups.

However, he added, camping in tents also is allowed.

Asked about the maximum length of stay and rental fees, Carson explained that when the county bought the property, “the goal [was] to give access to as many people as possible.” Therefore, the maximum stay is 30 nights, so people will not be enticed to stay all year. “We want this to be a vacation place to enjoy,” Carson said.

The facility is not designed for large modern recreational vehicles, he pointed out.

When someone calls to make a reservation, Carson explained, staff takes the time to find out exactly what types of vehicles they have, so their needs can be accommodated. Because the road into the campground provides both ingress and egress, he said, people have to be able to back their vehicles or travel trailers into the sites.

As for sizes of vehicles: He noted that only two sites can accommodate a motor home that is 38 feet long, and another two sites are set aside for travel trailers up to 28 feet in length.

Asked about making reservations, Carson pointed out that county residents may book spaces up to nine months in advance, while those who do not live in the county can book no further out than six months.

Given the demand for spaces, he encouraged the audience members to keep those rules in mind, as those windows are “exactly when you need to book.”

Just before Hurricane Irma arrived, he continued, people were trying to make reservations for vacations in March. They would call “on the dot” at 9 a.m. to get the spaces sized to fit their vehicles’ needs, he added. Irma “put a big damper on that.”

Because the campground’s phone lines went down, Carson said, it took a while before people once more could reach staff. He estimated “upwards of 60 phone calls from 9 a.m. to 9:05 a.m. just for one or two sites” after communications were restored. “So book early.”

.25 mill is estimate to create a municipality, per Save Siesta Key group

If Siesta Key becomes its own municipality, leaders of the Save Siesta Key group estimate that only a .25 millage levy will be required. They call it a “bare-bones” number. For a Siesta Key property valued at $479,000, which is the median assessed value for the Key, the local tax bill would be $119.75 per […]

Lifeguards put on a show at Siesta Beach

About 200 lifeguards from all around the state of Florida competed on Siesta Beach on July 21 and 22 in the annual James P. “Mac” McCarthy Regional Surf Livesaving Championships. Sarasota County lifeguards were among the teams. Winners in 16 different events move on to the national championships in Galveston, Texas. Here is a video […]

While a group of Siesta Key residents strives toward incorporation, it wouldn’t take place until Dec. 31, 2022 if successful. Until then, the Key will continue to be governed by Sarasota County officials. That doesn’t mean some local residents can’t help represent Siesta Key in the near future, as three seats on the Sarasota County […]

Kids run wraps up on July 27

Tuesday, July 27 is the final night for this year’s Kids Summer Beach Run series, taking place at Siesta Beach. The event includes a 1-mile run and is for kids 18 and under. Adults can accompany youngsters if they choose. Registration begins at 5:30 p.m. with the run starting at 6:30 p.m.. An adult run […]