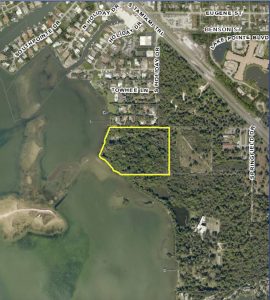 One member did voice displeasure with the current owner’s seeking a fallback plan in the event the proposed sale of the property does not ensue. Nonetheless, the Sarasota County Planning Commission unanimously approved the rezoning of a 13.3-acre site on Little Sarasota Bay for a multi-family residential complex called Cassia Cay, with amended stipulations.

Two development options presented to the board on Nov. 3 differed in terms of the number of units, building heights and massing of structures on the site. Brenda Patten, an attorney with the Sarasota firm of Berlin Patten Ebling — a representative of the latest developer of the property — explained that the reason two options for housing on the site were before the commission “is because of contractual obligations between the buyer and the seller.”

If her clients — led by Core Development Inc. of Wichita, Kan. — fail to close on their proposed purchase of the site and, therefore, do not develop the most recent configuration of residential units, she said, the current owners want to retain their right to build the option originally approved by the County Commission in 2006.

Option A calls for 152 multi-family dwellings with a maximum building height of 55 feet and 358 parking spaces, county Planner Adriana Trujillo-Villa explained to the board. Option B entails 98 multi-family units in buildings that would be 45, 56 and 68 feet in height, with the condominiums constructed over parking.

Option A calls for a building setback of 69 feet from Little Sarasota Bay, she added, while Option B called for a setback of 80 feet from the water.

Saying he was “trying to get his head around [the options],” Commissioner Kevin Cooper explained, “It didn’t set well with me, the whole time I was reading it.”

“Why do it this way?” he asked Deputy County Attorney Alan Roddy, since Patten had told the board the idea originated with Roddy.

“This was better than the other alternative I heard,” Roddy replied. The property owners want to keep the rights to build the site plan that the county approved in 2006, Roddy continued, because they are not certain the intended buyers will follow through with the purchase of the land.

The alternative proposed to county staff, Roddy added, was to have the Planning Commission and County Commission approve an ordinance that would remain in limbo until the future ownership of the property had been determined. “We don’t want an ordinance hanging around out there.”

Still, Roddy noted, at some point, a petitioner might come to the Planning Commission with three or four options for a site, depending on what potential outcomes of a deal. “That [approach] might not be accepted.”

As Patten had pointed out, Roddy said that when someone comes forward with a request for county staff to approve a construction plan for the site, one of the two options before the board that night will be set in place for Cassia Cay. Such a plan “is the one common element we get to in the development process,” he told the commissioners.

“Tonight, we actually have the opportunity to reduce the number of dwelling units on the property,” Commissioner Andy Stultz pointed out.

Responding to public comments about the intensity of traffic that will result from the new residences, Cooper added that if Option B is developed, that will lead to fewer vehicles.

“I actually like B better,” Commissioner John Ask said. “I hope we get that reduced density.”

And although a number of the speakers during the public hearing voiced opposition to plans for commercial development of the 18-acre site east of the designated residential area, Patten explained that the applicants had withdrawn the rezoning petition for that segment of the proposal while they work with Florida Department of Transportation (FDOT) staff about some changes in their concept.

Several times during the Planning Commission hearing that night, Chair Jack Bispham reminded audience members that the board was not addressing the commercial part of the development. The County Commission will hear the rezoning petition on Dec. 14, spokesman Drew Winchester told SNL.

Plans past and present

During her presentation, Trujillo-Villa explained the exact location of the proposed residential development. It is south of Holiday Drive and west of the county’s Bayonne Preserve. The applicants worked with the Holiday Harbor Homeowners Association, she noted, on a series of private stipulations.

Representing the residents of that community, Jeffrey Stepek explained to the board that he and other members of the association spent more than a year, starting in 2005, working with the owners of the property before entering into the private agreement. It mitigates a number of concerns Holiday Harbor homeowners had regarding Cassia Cay, he added.

After they were approached by the applicants for the more recent proposal, Stepek continued, it took several months to reach the agreement on Option B. If at any point one of the two development concepts proceeded without all the mitigation measures approved, he said, Holiday Harbor would withdraw its support of the project.

And while the Holiday Harbor association a number of years ago nominated the site on Little Sarasota Bay to the county’s Environmentally Sensitive Lands Protection Program, Stepek pointed out, the money never materialized for the county to buy the land. Therefore, Holiday Harbor residents’ goal has been to ensure their privacy, safety and security, he added.

Crystal Allred, a project planner for consulting firm Stantec in Sarasota, explained to the commissioners that about 75% of the residential site comprises spoil from the creation of the Intracoastal Waterway. It contains exotic trees and wetlands. The preserve next to it does have a bald eagle protection zone, she noted.

During the public comments portion of the hearing, Wolf Zuller told the board, “This particular piece of land is unique. It’s the last waterfront we have that should not be built on.”

New county ordinance governing mangrove trimming and protection in effect as of Nov. 1