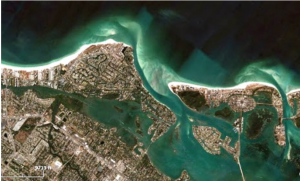 By Catherine Luckner, VP of SKA

The ebb shoal of Sarasota Big Pass and channel have no history of dredging. Consideration for this area to be dredged , for either navigation or sand source, have been excluded  based on its natural protective function from storm surge, erosion and its sand source for beach renewal . Big Pass has remained a naturally navigable channel through all years of known measurement.  Dr. Leatherman, also known as “Dr.Beach”, once remarked he was amazed our Pass had never been dredged, as most Pass areas in Florida must now be artificially maintained. Our Siesta Key public beach has never required renourishment.

In 1992 the “save our sand!” call to action was set in motion by Siesta Key Association and island residents. We’d learned of an approved DEP plan to dredge sand from the ebb shoal of Sarasota Big Pass. While knowledge of a plan to renourish Venice Beach was public, expectations were for a permitted off shore sand borrow site.  The news of a City of Venice and County supported plan approved by DEP was also delivered in our daily paper, contained within an article by the Sarasota Herald Tribune. This was not a customary process.

The Save our Sand Committee of the Siesta Key Association (SKA) raised significant financial contributions for challenging this permit plan. These funds supported   securing of scientific opinion, Legal assistance and Court challenge to the Permit being issued.  The Permit, challenged in a legal process, was subsequently rescinded on two essential elements: there was inadequate public notification or input period by our citizens and environmental review required for natural resource protection was not adequate.  The Venice Beach renourishment was subsequently completed with a permitted sand source off Manasota Key.

Within four years (1998) SKA again challenged consideration of the ebb shoal for renourishment of Lido Beach by the City of Sarasota.  SKA secured a Coastal Geologist opinion referencing a previous report (1994).  Our letter, sent to Sarasota City Council, Sarasota County Commissioners and County Administrator referenced the commitment they all made previously to leave the ebb shoal in its natural state. The Coastal Geologist Dr. Dolan, wrote in his report “mining the shoal for sand could be a costly and irreversible error”.

In 2004 increased attention to the potential for dredging arose when the ACOE received Federal approval for design of a Lido Key Shoreline Protection Plan. The applicant was the City of Sarasota.  Construction was scheduled to begin 2008. This approval occurred after a significant hurricane period in 2004.

After continued discussions and Engineering studies, the ACOE developed a preliminary plan for the Lido Beach project. Initially three existing approved sand borrow areas off shore had been considered. This followed multiple SKA   meetings with the City of Sarasota, Coastal and Natural Resources staff for Sarasota County, experts in the region regarding risks to the natural ebb shoal and Big Pass channel. SKA also discussed the plan with two Lido Key associations.

What emerged through all discussions was agreement on a common goal.

Lido Key needed help for critical erosion and in the process the project should accomplish this without doing harm to our natural environment or our Siesta Key beaches.

On Dec. 5, 2013, SKA hosted the first large venue public presentation of the ACOE preliminary plan.  We welcomed the opportunity to learn directly from the Engineering design team and the City of Sarasota Engineer.  For those who attended, it was a chance to voice questions and concerns directly. We provided written questions to the ACOE in advance and further provided cards for written questions from those attending. There was robust response and credible and fearful concern for the outcome of the project design.  Our Members sent Petitions requesting there be an Independent Peer Review process of the ACOE plan.

The ACOE Engineers stated this was a preliminary plan. The final plan or Permit Application, was reported to be, at minimum, two years or three years away.

SKA, in January 2014, reaffirmed our request from the Board of Commissioners of Sarasota County, to authorized expenditure of funds for a third party review, by an independent Coastal Engineering group.

Throughout the next several months, SKA members and the business community joined in expressing concerns of great risk should the Big Pass shoal be mined. ACOE submitted a new preliminary plan in June 2014.

In July 2014, SKA spoke during the budget review meeting of the County. Being considered was use of storm damage funds derived from the Tourist Development Tax (TDT).  SKA advocated for the approval of up to $1M (TDT) beach restorations funds to supplement FEMA assistance for critically eroded portions of Lido Key beach. The damage from 2012 TS Debby had accelerated since 2012 and existing funds and approved sand volume was inadequate.  Funds were approved.  With critically needed relief for our Lido Key neighbors, we hoped this would create security during additional ACOE plan review.

During the same budget hearing, Sarasota County focused on needed evaluation of impact for the South Lido County Park. The impact issues arose after SKA provided historic data (May 2014) surrounding the purchase of the Lido Key park land, using federal funds in 1973. These federally funded grants were to purchase land to “maintain open spaces and recreational use by the public forever in their natural state”.   A tax referendum was approved by Lido and Sarasota County voters in order to add funds and purchase not only the Lido and Otter Key property, but also Casperson Beach for public use as County park land. The Federal funds matching through the State of Florida included a pledged to “keep these open spaces and lands in a natural state for public use and recreation”.  This included the mangrove bay bottom and mangroves.

As the ACOE plans include an anchoring groin structure within County Park public land, Sarasota County has a stake to steward this public land on Lido Key as well as the Siesta Key beach park.   (see Siesta Sand article Lido and City of Sarasota Fight Dredge and Fill…A Time Capsule)

On August 20, 2014, the Board of County Commissioners unanimously approved up to $50K funding to support an independent peer review of the most recent Army Corps of Engineers proposal. The choice of an independent Engineering firm has not occurred but is in progress. We have confidence a highly reputable firm will be chosen once a finalized ACOE plan is completed and provided for review.

Within the month of March 2015, we expect the revised ACOE plan to be provided.  After public presentations, a 45 day comment period will be available for new questions and statements of concern and all questions sent to the ACOE must be answered.  SKA has offered to host such a public input meeting.

The second criteria process of NEPA required could be an Environmental Impact Statement (EIS) which is more comprehensive.  Other criteria includes that of the Water Resource Development Act (2014).  Without a completed permit application and funding under this recent legislation prior to August of 2015, the ACOE project could be further delayed.  The ACOE are currently in discussion with the State of Florida DEP to determine if the plan meets the environmental requirements prior to the permit application.

SKA has worked for more than 66 years on behalf of all who love Siesta Key and the Sarasota environment surrounding us. Our Sarasota Bay is listed within the “Waters of the U.S.” as a significant estuarine environment.

We invite you to join in our good work on this and many other civic issues.

Is a Roundabout REALLY Needed?