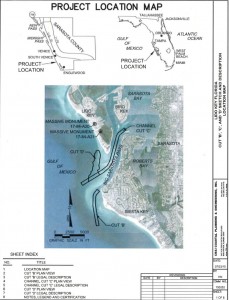 The U.S. Army Corps of Engineers (USACE) is still at work on its response to the Florida Department of Environmental Protection’s second request for information regarding the proposal to dredge Big Sarasota Pass to renourish Lido Key Beach.

That was the latest update — provided on Feb. 4 — from Lt. Col. Susan J. Jackson (U.S. Army Reserve), the USACE spokeswoman in the agency’s Jacksonville District Office. She was responding to a Sarasota News Leader (SNL) request for information.

In October 2015, the Florida Department of Environmental Protection (FDEP) issued its second Request for Additional Information (RAI2), seeking further details pertaining to the $19-million proposal to dredge the pass and build two groins on South Lido to try to hold the sand in place between renourishments scheduled every five years. The USACE and the City of Sarasota need an FDEP permit before the project can get under way. However, Jackson also told SNL in late November 2015 that Congress has not awarded any funding for the project, though the USACE expected to get final budget figures early this year, possibly this month.

In conjunction with issuing the RAI2, FDEP sent an Oct. 7, 2015 letter to Sarasota City Engineer Alexandrea DavisShaw and Eric Summa, chief of the Environmental Branch of the USACE in Jacksonville, saying the requested material should be submitted within 30 days. If the FDEP did not receive a response within that time frame, the permit manager would contact DavisShaw and Summa, the letter added.

However, FDEP’s letter pointed out that if the applicants could demonstrate they “have been actively working on collecting or developing the requested information,” and they needed more time, they could request up to six additional months to submit their responses.

As SNL reported last month, the USACE has been working with FDEP on points related to its response to the RAI2. During the February meeting of the Siesta Key Village Association, Peter van Roekens, chair of the board of Save Our Siesta Sand 2, reported that members of his organization — one of many on Siesta Key opposed to the dredging of Big Pass — have had numerous conversations with FDEP representatives. The state officials continued to say they expected the RAI2 response “within the next two weeks,” van Roekens added, “and that’s been going on now for several weeks.”

In the meantime, Sarasota County staff has not received any response yet to the Atkins firm’s peer review of the joint proposal of the City of Sarasota/USACE to undertake the project. Drew Winchester, a county spokesman, told SNL on Feb. 2 that Laird Wreford, the county’s coastal initiatives manager, indicated the city would be submitting a reply soon to county staff, but Wreford did not have an exact date. Atkins completed its final report to the county in late October.

Catherine Luckner, second vice president of the Siesta Key Association (SKA), reminded about 70 of that organization’s members during their February meeting that she understood from her recent conversations with county employees that the effort to engage city staff in discussions is focused on determining whether any new factors could be made part of the permit application process. “There may be many ways for Lido to get help, and it doesn’t have to be to the detriment of us or [Lido residents],” she pointed out.

Because of the natural downdrift flow of sediment on the west coast of Florida, environmental engineers — including the Atkins team — have questioned the USACE proposal to remove about 775,000 cubic yards of sand from Big Pass’ channel and ebb shoal, which are south of Lido Beach, to replenish the Lido shoreline.

And in a related matter, Dee Ann Miller, a spokeswoman for the Florida Department of Environmental Protection (FDEP), wrote SNL an email last week, clarifying that the Atkins report will be “reviewed and considered as part of our overall permit application [process]. It will be treated as any public comment or 3rd party input.” Miller added, “There are still not plans [to] respond or comment to the county.”

Sarasota County Commission Chair Alan Maio — who represents District 4, which includes Siesta Key — told members of the Siesta Key Condominium Council at their Jan. 19 meeting that as soon as county staff has received responses it has requested from FDEP and the city, a public discussion of the Atkins report will be scheduled.
Maio added that he expects the Commission Chambers to be full when that topic is addressed, because of the intense public interest.

Many community groups at work

During the February SKA meeting, Luckner explained that because the proposal to dredge Big Pass “was so scary in general, there wasn’t a shortage of people getting a move on, including us,” to oppose it after it was announced. She continued, “There has been just a huge public involvement” among a number of organizations, including the Siesta Key Chamber of Commerce, the Siesta Key Village Association, Save Our Siesta Sand 2 (SOSS2) and homeowners associations. The SKA was the first of those to hold a public meeting on the project, she added. That December 2013 session drew about 100 people.

In May 2015, SOSS2 hosted a session that featured Robert Young, director and professor of coastal Geology at Western Carolina University in North Carolina. Young addressed about 125 people as he explained problems he had found with the USACE proposal.

“We have a lot of people keeping eyes on things,” Luckner continued during the February SKA meeting, “and that’s always good.” She also pointed out, “When I say ‘SKA,’ I’m looking out [at members in the audience].”  Luckner further explained that the SKA was the only organization to submit a letter to FDEP with concerns about the project during the mandatory 30-day comment period provided after the USACE submitted its permit application on March 16, 2015. On April 15, 2015, she continued, when FDEP issued its first Request for Additional Information (RAI1), some of the questions it posed were among those the SKA had raised in its letter, Luckner noted.

The SKA, SOSS2 and other organizations, including the Florida Wildlife Federation and the Suncoast Waterkeeper, have sent in subsequent letters and comments, she added. Nonetheless, she explained, FDEP staff has made clear that, under the Florida Statutes with which the department has to abide, “the department [staff] cannot ask any new questions,” only those related to the issues already raised in the RAI1.

Still, those other communications are important, she stressed, because they remind FDEP staff members that “they work for us.” She added, “They are the gatekeeper, [but] they are our gatekeeper.” Luckner also emphasized her confidence in the Sarasota County Commission and staff, noting that the County Commission each year compiles a list of its top priorities for the Florida Legislature, and the county has made it clear it continues to oppose any changes in state law that would prevent it from regulating wetlands, docks, protection of natural resources and coastal armoring. “That is our county speaking for us,” she said.

On August 20, 2014, the Board of County Commissioners unanimously approved up to $50K funding to support an independent peer review of the most recent Army Corps of Engineers proposal. This followed a July 2014 budget hearing during which Siesta Key Association (SKA) requested the County fund such a project. The County selected Atkins North America from the Coastal Engineering Services Procurement Library to complete the review. The scope of work in the review was defined by any impact to the South Lido Ted Sperling County Park, Big Pass navigational channel and coastal environmental including Siesta Key beaches and property.

Atkins submitted the final report to staff on October 28, 2015. The Atkins Report poked numerous holes in the COE dredging plan. The County has received numerous inquiries from the public regarding when a presentation of the Atkins report will be provided to the Board of Commissioners (BCC). The Atkins contract includes a provision for a final report to the BCC.

Osterhoudt’s email stated, “FDEP [Florida Department of Environmental Protection] staff have informed us that their permitting staff have carefully reviewed the Atkins peer review report and have taken it into consideration.  While the report has not been specifically incorporated into their Requests for Additional Information (RAI), the report was taken into account.  At this time, we do not have indication that the FDEP will be providing a written response to the County regarding the Atkins report.”

It continued, “City of Sarasota staff have informed us that they are working on a written response to the Atkins peer review report.  From what we understand, they intend to provide a response approximately within the next two weeks that might help provide explanations and/or other perspectives that should be considered during the presentation by Atkins.”

“Regarding the presentation by Atkins to the Board of County Commissioners, we have tentatively scheduled time on March 23, 2016 (North County meeting date in the afternoon session) as a Discussion Item.”

Catherine Luckner, Vice President of the Siesta Key Association responded to the information: “What was encouraging to note is the FDEP did state they had staff review the Atkins Report and while it can't be included in the RAI process, it is considered as relevant information,” Luckner stated. Luckner went on to say, “The comments SKA submitted in the original letter to FDEP (regarding the COE permit application) included questions about design of the project itself, including the groin type and the benefit of it. This is reiterated in the Atkins report. Our efforts to work the problem may  eventually reap a better outcome of collaboration on the best way to help Lido while conserving our Big Pass environment and our down drift Siesta Key beaches.”

March Siesta Key Round Up

Turtle Beach Park to get upgrades