Florida: the perils and profits of pot

American law is in a literal pot hole. Marijuana possession, sale and cultivation is about as illegal as it gets. It is banned under an international treaty promulgated by the United States. It is illegal under U.S. Code. And it is illegal in Florida.

Yes two U.S. states – Washington and Colorado – have legalized pot for all uses including recreation. The U.S. Treasury earlier this year released a finding that profits from pot sales will not be seized if they enter the U.S. banking system.

And 19 states have approved marijuana for medical use. Florida voters in November could make the Sunshine State the 20th. It leads to a pair of interesting questions. Is reefer madness about to sweep down the peninsula? And what’s in it for me?

Origins of the pot ban

What were they smoking in that peace pipe? Yep, you got it partner. wacky weed. And what did Queen Victoria use to ease her menstrual cramps? Yes, m’lady it was Mary Jane. And how did Astronomer Carl Sagan come up with all those far-out ideas? Reefer, dude.

Cannabis Sativa is a hardy plant, known worldwide for a variety of uses. Its seeds have been pressed for cooking oil. Its fibers were used to fashion rope and cloth. But it is best known as a producer of a psychoactive chemical mix commonly called THC – the stuff that puts “wacky” in the weed. Even cows like it.

Cannabis was once as legal as butter in the United States. You could buy it from a New York City newsstand in a cloth 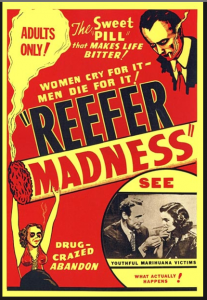 bag with rolling papers attached, and some grocery stores sold it in bulk. But in 1937 Congress passed the Federal Marihuana Tax Act four years after alcohol prohibition ended. (Yes, they spelled it that way)

To this day some say the 1937 law was a racist attack on African-Americans. Marijuana was an integral part of the Jazz Age. The trumpeter Louis Armstrong was a lifelong fan of marijuana. Others say it was aimed at immigrants in the Southwest, while still others say it was the threat to create cheaper pulp paper for newspapers.

It took more than a century for temperance groups across the nation to gain approval of the Eighteenth Amendment in 1919 to ban the possession, sale and manufacture of alcohol. But the marijuana ban took only about one year, and instead of a Women’s Temperance Union with chapters across the country, the pot prohibition required only one year and one movie.

It was first called “Tell Your Children,” but was scooped up by an exploitation film producer and re-labeled as “Reefer Madness.” It was originally financed by a church group as a morality tale. The producer added rape and murder, and released it in 1936.

Whatever the reason, the substance was banned under Federal law. The U.S. State Department successfully lobbied the League of Nations before World War II to expand the ban to other countries, and widen the list of banned substances. The latest “convention” was approved in May 2013 and has 184 state signatories.

By 1952 conviction for first-offense possession was a mandatory two-year federal prison sentence.

One finger in the dike

A decade-long “counterculture” swept the world starting in the mid-1960s, and marijuana was part of it. Florida became known as a center of “pot hauling,” and old fishing villages along the west coast began to show signs of prosperity. But it wasn’t just Florida benefiting from the demand.

The Netherlands – although a signatory to all the anti-drug conventions – stopped arresting people for possession of personal amounts of marijuana and hashish (a refined cannabis product). And soon what the Dutch called “juice bars” began to open; in the back, “personal amounts” were sold over the counter.

The news spread like wildfire on the counter-culture grapevine, and Holland became a drug vacation destination. People looking for a “legal smoke” and a “legal deal” flocked to the new juice bars, so-named because alcohol was forbidden inside.

Like all commercial success, there were problems. Eventually the towns and cities at the border became overwhelmed with European visitors looking for their “legal deal.” And supplying all those juice bars became a very big drug business. Because importation remains illegal, supply to the juice bars often involved some form of organized crime.

One finger in the air

The Dutch are eying the Colorado experience closely, with one economist suggesting if pot growing and wholesaling was legal, it would mean $1.4 billion in excise tax, plus a saving of $200 million on police investigations and raids. And it would cut criminals out of the supply system.

Newsweek earlier this year reported, “The official-tolerance policy hasn’t led to an increase in marijuana use, which remains lower in the Netherlands than in the U.S., according to a study last year.”

Nor did it seem to impact on the crime rate. I visited Holland soon after the juice bars began to open. I asked a desk sergeant at the police substation in the heart of Amsterdam’s red-light district if he’d seen any uptick in crime. “Maybe a few more car burglaries, but nothing at all serious,” he said.

The proposed Florida constitutional amendment would make medical marijuana legal. A host of regulations would follow, although this is not new territory anymore. And Florida certainly isn’t the same tidy-streets, tidy-minds environment as the Netherlands.

With nearly half of the United States now embarked on some degree of marihuana legalization, the bellwether State of Florida could be the first in the southeast to join them.

There would be one small irony if the amendment gets the support of 60% of the voters and passes. Most of those Southwest Florida pot haulers from the ‘60s and ‘70s are now old enough to need it to ease their pains.

Coming Home After a Storm