Although Sarasota County staff still has not completed its accounting to arrive at the total expense of the South Siesta Key Renourishment Project — which was completed in late April — staff has the potential of netting extra state grant money to help cover the cost, the county’s coastal initiatives manager has reported to the county’s Tourist Development Council (TDC).

Moreover, staff has been very pleased with the color of the sand and with the fact that Tropical Storm Colin did not seem to do much damage to the beach, Laird Wreford told the TDC during its June 16 meeting. “A fair amount of sand” was lost from the southern limit of the renourishment area, Wreford said, but the bulk of the project fared well. “We really didn’t suffer that significantly.” 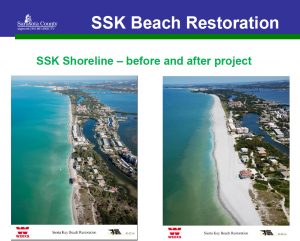 Funding for the estimated $21.5-million project will come from Tourist Development Tax (TDT) revenue, assessments of the property owners along the slightly more than 2 miles of beach front and a state grant, he explained. The county already has received $2.75 million in state money, he said, but it is seeking $6 million to $7 million more. “We have up to three years after construction to still secure that funding.” Ultimately, he explained, that could affect the total assessments the property owners will pay.

A public hearing before the County Commission to set those assessments was postponed in June as staff continued to compile the final amount of the expense. County spokesman Jason Bartolone told SNL that the public hearing has been rescheduled for Aug. 23,” noting that the board will be on its annual summer break the last two weeks of July through and the first two weeks of August.

On July 14, Rachel A. Herman, the county’s environmental planning manager, informed SNL that staff was continuing to work on the final figures for the cost and the assessments.

Wreford pointed out to the TDC that the renourishment this year was the second project to place sand on south Siesta Beach. The first was completed in 2007. The project area runs from a rock revetment that is about 3,000 feet south of Point of Rocks, he noted, to the southernmost house on the island, where waves were “washing against [the] bulkhead].” Altogether, 713,000 cubic yards of sand was dredged from three submerged areas in the Gulf of Mexico and placed on the breach, he added. Weeks Marine of Covington, La., had two hopper dredges heading 7 to 10 miles offshore to collect the sand, Wreford said.

During remarks to celebrate the conclusion of the project, County Administrator Tom Harmer noted that the amount of sand placed on the beach weighed about 1 million tons, or the equivalent of more than 200,000 elephants. “We’re actually hearing some very positive feedback from some of the residents along the project area,” Wreford told the TDC members.

On March 9, he pointed out, the sand placement on the beach began; it was completed on April 26. “You’ve got to normally count on three to four months for the sand fill. … This was seven weeks.”

Wreford said Weeks Marine used two hopper dredges for its work. The vessels would pass each other in the Gulf, he noted: one coming in as the other went out.

A dredge sucks in a slurry of sand, he explained, and pumps it into receptacles. A pipe then carries that sand to the shore, where the “big blast of sand slurry” is shaped by bulldozers to “systematically build [the] beach.” “And sure enough you see this miraculous transformation from this very, very narrow and steep and threatened shoreline to a fat and happy shoreline. … The end result was tremendously successful.”

It was also a successful event for wildlife, he noted. As required by the permitting process, he said, a trawler traveled out into the Gulf in advance of the dredges each day, looking to capture any turtles that might be in the vessels’ path. Those turtles were relocated “out of harm’s way.” No turtle was injured during the course of the project, he pointed out. Altogether, Wreford added, 46 were relocated.

The future of renourishment projects

After Wreford’s presentation, Venice City Councilman Bob Daniels told his TDC colleagues he did not believe county leaders could count on such renourishment projects to keep their beaches in good shape in the future. County Commissioner Charles Hines, who serves as the TDC chair, replied that he also has concerns about renourishment projects in the years ahead.

Wreford told the council that more and more coastal areas are engaging in renourishment projects for the first time. “You have this ever-increasing demand for sand,” he added; yet, offshore deposits in the Gulf of Mexico are becoming scarce. Communities are removing submerged sand much faster than it can be replenished offshore by natural systems, Wreford explained.

And while some people are researching ways to keep sand in place, “it’s extremely dicey,” he added. Structures installed to retain sand end up creating greater erosion issues in other places, he continued.

One experimental source of renourishment material, Wreford said, is a “glass-like product” without the jagged edges. It has much of the same quality and feel of real sand, he pointed out, but more research needs to be undertaken to determine whether it might harm wildlife. For example, Wreford said, the temperature of the material might prove too hot for turtles and birds.

Daniels asked whether any discussion has been scheduled for the TDC in coming months regarding new technology that might be able to keep sand in place in lieu of renouirishments. Hines told the TDC members he would talk with Wreford about either bringing in an expert on such science or letting Wreford provide a more detailed presentation about information he has learned from attending seminars.