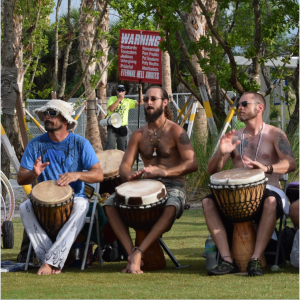 The weekly drum circle on Siesta is usually a low-key, peaceful event.

“It’s very low key,” says Susan Slack, a Sarasota resident who goes to the drum circle regularly to see friends, exercise and spend time on the beach. “It’s really a family affair, even if we’re not all in the same family.”

Over the past several weeks, however, a group armed with powerful bullhorns and large signs has disrupted the low-key atmosphere. “They yell and shout over the speakers about fornication, sodomy, [and express] homophobic slurs,” Slack wrote in an Aug. 3 email to County Commissioners.

In an interview with Siesta Sand, Slack said she believes it is the same organization that recently disrupted the Harvey Milk Festival in downtown Sarasota. The group wears shirts that read “Team Jesus Preachers.”

At the drum circle, members of the group have been present for the past four of five Sundays (as of press time), clashing with circle participants. “They come in like the devil, to use their terminology, and try to ruin the drum circle,” Slack told Siesta Sand.

The group appears to understand legal first amendment limits, and even went to lengths to bring smaller megaphones after they learned that the sheriff’s office would be measuring decibels of their amplified language, Slack said.

Slack was not the only one to note their concern to county commissioners about the organization that goes by “Team Jesus Preachers.” In an email to the County Commission, Natalie Good said she was worried about children or residents’ friends and family from out of town viewing the harassing behavior.

“For some, the drum circle is the only means to make friends and have connections,” Good wrote in her email to commissioners. “For some, it is the only day to look forward to… For MOST, however, it is the place to be yourself and not be afraid of others’ judgment or views. At the drum circle, we set aside our conflicting views and we gather to socialize and unwind. “Team Jesus Preachers” has intentions to drive the drum circle and its’ attendees out of Siesta Key Beach and to drive people away from the fun and love.”

Slack believes the group might have once been motivated by Christian beliefs, but their actions, as captured on video, conflicts with such a mission. The organization Team Jesus Preachers has a You Tube page that shows preachers with bullhorns getting into several disputes and altercations, including incidents with spring breakers in Daytona Beach, and beachgoers in Fort Myers Beach and Siesta public beach. 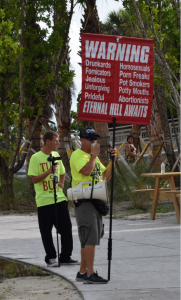 At the time of press, Team Jesus Preachers was unable to be reached for comment. The organization’s website did not contain any contact information. Although an attempt was made to elicit additional information from the group present at the Drum Circle, it was without success.

According to Slack, “If the cops were to arrest them, then everything is in place and they would go and sue the county,”

She went on to say, “The cops arrest them, and they sue the county on first amendment rights.” If arrests are made, videos will likely capture the event, as in the case of video footage, posted online, of a group member being arrested at a Fort Myers arts festival.

Deputies have been present to monitor the group at the drum circle and on Sunday, Aug. 23, someone was arrested after an apparent altercation with one of the speaker’s holding a bullhorn. “I don’t think it was one of our regulars,” Slack said.

“There were only five or six people from the group so they appear to be ‘dwindling’,” according to Slack.

“The courts have found that sound cannot be regulated simply because it is amplified,” Carolyn Brown, Sarasota County Parks Director wrote in an email that was sent to Slack and county commissioners. “Rather, sound, amplified or not, is regulated by decibel level at certain measuring points. Because sound regulations cannot be content-based, any regulation would apply to all noise at the beach, including the drum circle.”

Slack says drum circle participants have used several tactics to try to suppress the vocal group. Some use bells and shakers to try to drown out the speakers armed with bullhorns, and one drum circle regular even brought her own mega phone and blasted her siren at the group.

For the time being, county officials are advocating monitoring the situation at the drum circle and using a hands-off approach.

“After consultation with both the Sarasota County Sheriff’s Office and the Office of County Attorney, the best option is to continue to work through the Sheriff’s Office to assist with the management of this public gathering to ensure patron safety in the event of a breach of peace (disorderly conduct),” Brown wrote in her response email. “To constitute a breach of peace a group would need to shock the moral conscience of the public or engage in conduct soliciting a fight (not an argument). The approach used by the open-air preachers during the drum circle event appears to stay within 1st Amendment rights and does not constitute a breach of peace. Law enforcement is present at the drum circle to aid in the preservation of peace and monitor the situation in case anyone violates the law.”

Farewell to a friend who knew how to throw a party