The World of Bix Mannion

Bix Mannion is a contemporary impressionist painter who focuses on the portrait, the figure and 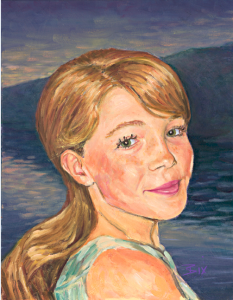 its relationship to its environment.

Born in 1960, his background is unique. Bix tells the story in his own words:
“I was born on the Mainline of Philadelphia, where my entire family was involved in both business and the arts.  My father was the CEO of a large greeting card company, a position that combined both his entrepreneurial spirit and his passion for art.  He later became a successful real estate developer where his attention to detail and appreciation for beauty made him stand apart.  Not surprising to anyone, he became a successful painter in his retirement.

“My grandmother was both an artist and a patron of the arts.  She and her husband, Jack Dorrance possessed one of the most extraordinary private Impressionist art collections in the world.  I grew up walking through the galleries in their home admiring the Picassos, Monets, and Renoirs, and especially the Van Goghs and Matisses! Ironically, the family that had founded Campbell’s Soup had no interest in Andy Warhol.

“When my grandmother became aware of my interest and apparently god-given talent, she took immediate action.  At the age of ten I began taking private art lessons with Madame Magat, one of the premier French painting instructors in the Philadelphia area.  While my classmates at the Haverford School were playing touch football, I was hopping a train to center city, brushes and art supplies in tow.  After years of weekly private lessons, I took on the ambitious endeavor of copying a Renoir from a photograph.  That Christmas I presented it as a gift to my grandmother.  Upon opening it, her husband chuckled to himself and declared: “We can hang it next to the original upstairs!”   From that point on, my Grandmother became my major patron.  All through my youth I continued to win praises from the Mainline art community.” 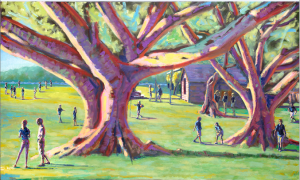 Bix Mannion was to go on to the Hotchkiss School in Connecticut, as his father before him had done.  He then attended Middlebury College in Vermont.  Throughout his school years, his focus was on art.  Leery of the financial instability inherent in becoming an artist, Bix followed the example of his family and entered the more prudent field of finance.  He stayed in that field for 25 years as a mortgage banker at Bryn Mawr Trust.  While there, he met his wife, Gretchen, whose profession is in the field of Interior Design.  Her signature interiors mix contemporary with both rustic and vintage accessories.  (www.gretchenmannioninteriors.com)  Together the couple shares a lovely daughter, Grace.

Five years ago, Bix retired from banking and began to pursue his passion as a full-time artist. He started by painting portraits of the children of many influential CEO’s with whom he had connected during his banking years.  As a credit to his talent, the demand for his work increased.  His wife Gretchen—also self-employed—believed that they could live anywhere.  She suggested the west coast of Florida.

Of choosing Sarasota, Bix has this to say, “We came down for one weekend to find a place.  After looking at many places without success we decided to settle on a rental. We were about to leave Sarasota when we stopped by Big Olaf’s Ice Cream shop on St Armands and met a man named Paul Temmer, who changed our lives.  In the true spirit of Sarasota and its friendly inhabitants, he told us about the Landings, and even provided us with a real estate contact! One look at the tree houses and we knew we were home.  And to boot, Paul is now one of our dearest friends!”

The Mannions packed up their belongings, said goodbye to Bill and Sam—two grown sons well rooted in Philadelphia—and headed for Sarasota with no intention of ever moving back.  They moved into their tree house and enrolled their daughter, Grace, at Out of Door Academy, and watched her flourish taking violin and Chinese on her own.

Today Bix revels in his new life. He does most of his painting in his tree house, and both he and 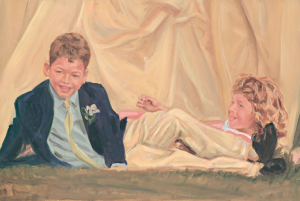 “I teach at the Sarasota Art Center, and I love it. As a mortgage banker, I was assigned to teach the ropes to low-income first-time buyers on the subject of buying a house.  I loved simplifying what most people think of as a complex subject. I feel the same way about art. If you look at a lot of paintings, you see that many artists are intimidated by faces and just leave them out. As I did with mortgages, I simplify the process and teach it in a systematic way. My students are often amazed by how well they do.”

On October 24, Bix Mannion will be part of a live exhibition, Artists at Work, at Art Center Sarasota. The talented Peppi Elona will be partnering with him.  Plan is that Bix is going to paint, while Peppi will incorporate fabric and other found objects into their creation. The pair will be one of ten teams of local artists who will create original works of art right before the onlooker’s eyes.  The theme of the soiree is An Evening in Paris.

In November, at the Grand Opening of the new Saks at University Town Center, Bix will team up with acclaimed fashion illustrator Bill Donovan. Both men will be composing quick works of art using the Saks runway models as their subjects.  Bill Donovan is a phenomenal artist who uses primarily black ink. Bix is more into color. The 20-minute portraits promise to be fascinating!

To see more of Bix Mannion’s work, go to www.bixmannion.com