The Fearless World of M.P.Manilla 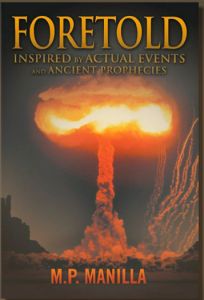 Sarasota is home to Mary Pangalos Manilla, a television journalist with stellar credentials. A former New Yorker who was twice nominated for the Pulitzer Prize for her thought provoking television documentaries, Mary has written a fact-based novel on the subject of a possible disaster at Nevada’s Yucca Mountain, a government site where nuclear waste is stored. To bring this potential catastrophe to the world’s attention, she has written Foretold, a startling and timely thriller based on actual events and ancient prophesies. She writes under the name of M. P. Manilla.

From childhood, Mary has been a fearless trailblazer and relentless troublemaker. As a journalist, she set out to prove that women can be as good as men, and sometimes even better. Born in New York City to Greek immigrant parents, Mary was fascinated by a comic strip called “Brenda Starr, Girl Reporter.” Inspired by Brenda’s heroic crusades, Mary was determined to fashion a life brimming with adventure, challenge, and glamour.

Mary studied journalism first at New York University, and then at Hofstra, where she became reporter, columnist, and finally

editor-in-chief of the school’s bi-weekly newspaper. Upon graduation, she landed a job at NEWSDAY after obstinately stalking Alan Hathaway, the Managing Editor. When he finally gave in and hired her, she was told to report to the Woman’s Department, where she was assigned to write the daily Calendar, a tedious job which consisted of listing dates and times of meetings of various women’s groups, garden clubs and social organizations.

After nine months of cooling her heels as Calendar girl, Mary was finally assigned to write a two-part series about women scientists working in positions that had once only been open to men. This project planted a seed in Mary’s mind. It was the 60’s and America was racing Russia to send astronauts into space. Seven American astronauts had been chosen to lead the way, future space missions were being planned, and Mary found herself wondering if women would ever be a part of them. What a story, she thought. She went to her NEWSDAY editor and suggested that she take the same tests given to the seven astronauts to evaluate them for space travel. If she passed, it would prove that women were also qualified to be astronauts.  If she failed, the current ban on women joining the NASA program would simply remain in place.

After an impressive amount of scheming and trickery, Mary was finally allowed to take the tests. (This lady has no fear of authority!) Ultimately, she passed all tests in a blaze of glory, helping to pave the way for women to enter the NASA program.

Even Brenda Starr would have been impressed!

Mary was immediately transferred to the NEWSDAY City Room where she was put to work as a “real” journalist, and sent out on other “intrepid girl reporter” type stories. In one of dozens of daring adventures, she snuck into Cuban territory shortly after the disastrous Bay of Pigs invasion, and ended up cooking New Year’s Eve spaghetti for thirteen heavily-armed members of the Alpha 66 anti-Castro resistance movement.

Having conquered the world of daily newsprint, Mary Pangalos’s next breakthrough came when CBS News hired her to be the first female on-air TV reporter to appear on a major network. She covered riots and demonstrations, disasters, gang killings, celebrity interviews, press conferences, as well as political campaigns and politicians from every level of national, state and local governments.

She also got married, an event that was covered on TV as part of the evening news show. Her new husband, James Nicholson Manilla, had been her professor when she enrolled in a film production course at New York University. An understanding man, he didn’t complain (much) even when Mary was called back to work on their wedding night to cover a major transportation strike.

In the midst of her frantically hectic television career, Mary had an epiphany. She realized she was merely reporting life instead of living it. She had fought to enter this 24/7 world, but now she departed, determined to follow her interest in film.

Helped by her husband’s connections, Mary went to work for JCPENNEY and later Federated Department Stores producing literally hundreds of television consumer stories, short films, and documentaries for which she received 28 international and national awards. She moved on to become Director of Public Relations for Henson Associates, producers of The Muppets. No challenge was too hard, and Mary’s career continued to blossom.

After the death of Jim Henson, Mary returned to work as a TV news producer. As a hands-on writer/producer/editor, she flew to Paris and Milan to cover haute couture shows, meeting with the greatest designers in Europe. She was to work for three different TV Newsmagazine shows in a period of five years before deciding to leave the field of journalism. Tragically, her husband had been diagnosed with cancer. They sold their apartment in Manhattan and moved to his beloved Berkshire Mountains in Massachusetts, where he valiantly fought a losing battle against cancer with great courage and grace.

Widowed, Mary Pangalos Manilla decided that now was the time to write that novel she’d wanted to write for years. It was a novel inspired by current events and ancient prophecies. She would call it Foretold.

The concept began in the 1990’s when Mary was a producer on newsmagazine show researching a possible story about our government’s plan to build an underground storage repository for 70,000 tons of high-level waste at Yucca Mountain, Nevada. The plan was highly controversial since Yucca Mountain is located in the third most active earthquake zone on the American continent, an area that is riddled by more than 30 fault lines. Dozens of nuclear physicists, scientists, and major environmental groups feared that an earthquake could cause an atomic explosion that would bury America under a massive blanket of radioactive fallout.

Combine the potential disaster at Yucca Mountain with Mary’s lifelong interest in Pre-Columbian Native American history and culture, and a storyline began to emerge. At the Smithsonian Museum of the American Indian in downtown New York City, Mary researched the Hopi Prophecy, which predicted hundreds of years ago that our world would be destroyed by “poison rain”.  Further research found a similar prophecy written in the Koran. To create the structure of her novel, she wove these ancient predictions together with possibility of disaster at the Yucca Mountain site. To get her message across to the widest range of readers, she also added a love story and a fictional Islamic terrorist.

In her latest career as novelist, M. P. Manilla continues to be a fearless and brilliant troublemaker. She has just completed a second novel—Swimming to Riker’s Island. She is also researching and working on a third novel, a film script, and a documentary about the Seminole Wars, a project in development with Planet Entertainment, a global film distribution and production company.

This fascinating woman will be holding forth at a book-signing on Sunday, January 26, 2014,. The event starts at 2 PM at Bookstore 1, 1359 Main Street, Sarasota.  Below is the Foretold trailer.

Foretold by M. P. Manilla is also available at Amazon and at Barnes & Noble. For more information, go to www.mpmanilla.com