The High-Tech Art of Peter Stanick 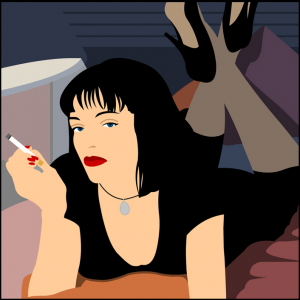 A major artist lives in our midst, and his name is Peter Stanick. He is a master of the Pop Art style, manipulating digital images on the computer by using web construction software as a drawing tool.

Peter Stanick received a BFA from Carnegie Mellon University in 1975, and a MFA from Indiana University of Pennsylvania in 1977. He is the co-author of New Masters of Photoshop, published in 2001 by Friends of Ed in London. This book was revolutionary in its time, for it bridged the gap between fine art and computers.

Born in Pittsburgh in 1953, Peter Stanick moved to Florida with his wife, Debbie, in 1990. Debbie is a business person, and she was looking for a place to open EXIT ART, a distinctive shop that would feature clothing, jewelry, and furniture, as well as the art of Peter Stanick. The couple took the leap and moved to Longboat Key in 1990, bringing with them their son, Pete, and daughter, Lorraine. Before long, Debbie found herself the proprietor of two shops:  EXIT ART at the Charthouse (201 Gulf of Mexico Dr, Longboat Key); and EXIT ART at the Centre Shops (5380 Gulf of Mexico Dr., Longboat Key.)  Peter Stanick would be fully occupied painting in his studio at home.

The Wall Street Journal has called Stanick “one of America’s hottest contemporary painters.” His canvases often have the look of giant video screens.   A prolific artist, Stanick’s list of exhibitions is long, prestigious and international. His work hangs in many public collections, including: the Metropolitan Museum of Art in New York;  the Osaka Museum of Art in Japan; the Carnegie Museum of Art in Pittsburgh; Novestra  in Stockholm; Continental Corporation in New York; Grasitel in Los Angeles; Landesbank Baden-Wurttemberg in Stuttgart; and Contact Music in London.  The Evening Standard has said that this “U.S. pop artist may be the natural successor to the late Roy Lichtenstein with his bold cartoon scenarios which generally lambaste the art world.”

Of Stanick’s 2007 exhibition at Lumas in Cologne, Lumas Magazine wrote:  “Stanick is one of the few artists who is consequently committed to the digital process and produces immediately accessible works, which—with their Pop Art forms and colors—enrich our analogue spaces.”

In 2012 itunes published three separate books about Stanick’s work. That same year he exhibited his Broadway Paintings at One Art Space in New York. In 2014, his work was included in an exhibition at Saatchi Gallery in London.

Most of his life, Stanick has painted on paper or canvas. In the past couple of years, however, he has been experimenting in different media. Currently, much of his work consists of ink on aluminum.  “Aluminum has a certain appeal,” the artist says. “It gives a machine-like quality to the finished piece. The way I work relies highly on technology, and I want the final product to equate the process. “ 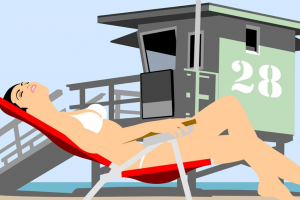 Currently, there are several great uploads on u-tube Peter Stanick’s work, many of them featuring the artist himself on camera.  Check out one or more of the following: STANICK NYC EXHIBITION; BEACH, BIKINIS, AND BEER; BROADWAY; I’M A JERK.  These videos capture not only the man’s work, but also his artistic philosophy and colorful personality.

To see Peter Stanick’s most recent work, go to www.stanick.com/2014. To see a few of his actual pieces, stop in at one of the EXIT ART shops on Longboat Key.