The Man Who Saved Batman

Michael Uslan is a producer of all the modern Batman films to date, starting with Tim Burton’s 1989 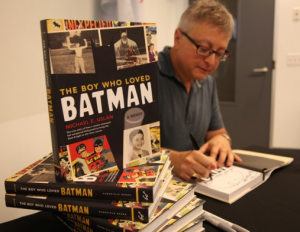 film. He is also a Sarasota Snowbird. He and his wife, Nancy, have been coming here since 1979, originally to visit her parents, and later to escape the cold and chaos of bi-coastal urban life in New Jersey and Los Angeles.

Under the auspices of Jeanne Corcoran and the Sarasota County Film & Entertainment Office, Michael recently addressed a group of students and film fans at Ringling College of Art and Design. The talk was motivational. To the young people in the audience, he had this to say: “Lucky you that you are in school right now. We are in an industry that is undergoing revolution. All kinds of opportunities are opening up. It’s an exciting, exciting time! If you have an opportunity to discover your passion and your dream, get up off the couch!  Only 10-15% of kids will do that, so if you do, your odds of success will shoot through the roof.”

Michael Uslan was younger than 4 when he started reading comic books: Casper the Ghost, Archie & Veronica, and Superman.  He was very comfortable with Superman because it wasn’t scary.  As an older and more sophisticated 8 year old, it was Batman who became his idol. He was drawn to the character because Batman had no superpowers, which made young Michael feel that a nerdy fellow like himself might actually become a powerful force in the world.

His Mom said: “Keep your comic books. I’ve read them and they’re fine. The deal is that you must also read other things like newspapers and magazines.” 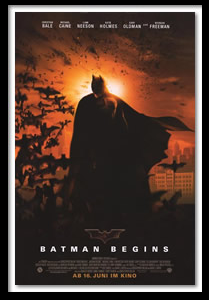 One cold night in January of 1966, Batman premiered on TV.  To Michal’s horror, he found the whole world laughing at Batman. They were making a joke out of his beloved idol! At that very moment he made a vow that he would work to restore Batman to the original character that had first been created in 1939 by Bob Kane and Bill Finger. Of this pivotal moment, Michael says: “It was the ultimate point of my career, and pretty much set the direction of my entire life.” He became determined to erase those words “POW”, “ZAP”, and WHAM” from world culture, and reveal to the world what a dark and serious character Batman really was.

Born in 1952, Michael Uslan was in his late teens when he began teaching the world’s first accredited college course on comic books. He taught it at the school where he was still a student: Indiana University.  This unique class caught the eye of news media, which in turn attracted the attention of DC Comics in NY. Michael was brought to New York to write some of the scripts for The Shadow.  Ultimately he even began writing Batman comic strips.

Move to the late 1970’s. Michael was in his 20’s when he and Ben Melniker obtained the rights to Batman. Truth was, nobody else on the planet earth wanted those rights because no one believed in Batman any more. Nonetheless, with those rights in his pocket, Michael proceeded with his vision of developing Batman in a dark and serious way. He quit his job, went out to Hollywood, and soon found every door slamming in his face. Stubborn and obsessed, Michael now entered a ten-year human endurance contest, which he describes in his memoir, The Boy Who Loved Batman. ”Every single studio told me that I was crazy, that it was the worse idea they’d ever heard…(it) was a rough, tough ten years of everybody telling you how lousy you are and how bad your ideas are. It really tests your mettle as a human.”

Along the way, he went to law school, taking every course he could find on communication, and beginning his “Plan B” career as a motion picture attorney. One of the film projects on his docket was Apocalypse Now. Michael came to realize that when a movie is produced, much of the process involves financing and contracts. The screenplay serves as the blueprint, of course—but it’s the “bean counters” and the “pencil pushers” who make decisions on where and when the film will actually be shot, and for how much.

In 1986, Tim Burton walked into his life. (Tim had just completed the fine cut of Pee Wee’s Big 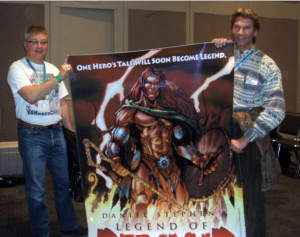 Adventure, created by Sarasota’s own Paul Rubens.) When Burton’s Batman came out – in 1989 – it had huge cultural impact.  It was a “Lost Horizon” journey of self-discovery. “You have to take Batman and The Joker side by side,” says Michael. “The Joker is pure evil in the guise of a clown. Batman is pure good the guise of a Monster. Batman is the only superhero with no superpowers. What is his superpower? It’s his humanity. The Batman fable is based on the life journey of a traumatized young man.”

Michael Uslan has more than one string on his Stradivarius. Most recently he served as Executive Producer of the Lego Movie (2014); Batman Vs. Superman (2015); The Dark Knight Trilogy, which included two of history’s top grossing movies: The Dark Knight Rises (2012), and The Dark Night (2008).  The latter received 8 Oscar nominations.

Michael Uslan was also the executive producer of The Swamp Thing TV series, 2004’s Catwoman, and 2008’s Spirit film.  He produced PBS’s Three Sovereigns for Sarah starring Vanessa Redgrave, as well as the children’s geography teaching TV show called: Where on Earth is Carmen Sandiego. His list of credits goes on and on, for Michael is a man of energy and action. 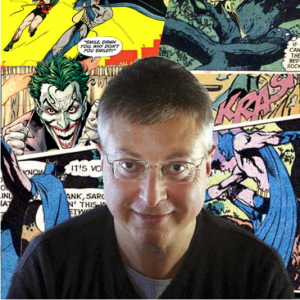 When asked how he sees the evolution of Media, Michael predicts that the paradigm of TV is changing. It will be “goodbye” to the 300 TV stations, which will be replaced by 3,000 internet stations. It’s a new world and a global one: Amazon, Netflix and Google will rule. Content is king, and the awakening “sleeping giant” is China. They have the money, the resources and enormous audiences. Opulent state-of-the-art movie theatres are being built in China at an incredible rate. In Michael’s optimistic words: “It’s exciting!  Dealing with China will require a lot of out-of-box thinking. The recession is ending. There are lots of new opportunities. Cinema is global. Computer skills and animation skills have become very marketable.”

Michael Uslan is one of Hollywood’s most accomplished movie producers. In 2001 he donated 30,000 comic books from his lifetime collection to Indiana University. They are housed in the Lilly Library along with other rare books and manuscripts.