1666 Hillview – A Piece of Sarasota History 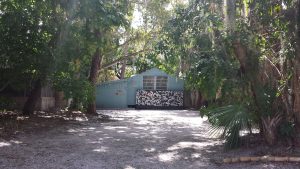 A comprehensive exhibit and sale of work by the late Frank Colson will take place at the historic house and studio at 1666 Hillview Street on Saturday, December 10, from 10-4. The extraordinary property is rich with Sarasota history. Placed on the National Register in 1993, it was home to Colson School of Art for 52 years, and home to the Amagansett Art School for the 20 years before that.

The two-story section of the house was designed and built in1940 by Hilton Leech, famed watercolorist and teacher who taught at Ringling School of Art from 1931-1945. This was where Hilton painted, with north light filtering through a dramatic 12-sectioned glass window reaching up to the tin roof. In 1941, he began holding classes in that same studio under the flag of The Amagansett Art School.

After World War II Hilton left Ringling to concentrate on his burgeoning art school. He purchased one-half of a “war surplus” military barracks, had it moved over from the Venice Airport, and plopped it down next to his house. (Those barracks had originally been built in the 1920’s, and had been used during World War II to house British pilots being trained at the Venice airport.) Dozens of painters came to study in Hilton’s hallowed hall, and The Amagansett Art School was a grand success.

In the early 50’s, Hilton and his wife Dorothy built a large single-story addition to the house, and surrounded it with clusters of giant bamboo. The property was left lush and natural, with tall pines, sea grapes, and a variety of exotic trees.

In the 60’s the Leeches built a new home and studio on Riverwood Avenue in Sarasota, and the Hillview buildings were put up for sale. In 1964, Frank and Diana Colson stepped up to buy it. The couple was a bit short on down payment, but Hilton accepted several of Frank Colson’s spectacular clay pieces in trade to cover the balance due. Their young sons, Kevin and Sean, were to grow up here, and to attend nearby Southside Elementary, where their mother taught music.

In 1964, kilns were built and Colson School of Art was born. For the next 40 years, a stream of pottery students became Frank’s apprentices, many of whom went on to become renown in the field of clay: Ann Darling, Carla O’Brien, Boots Culbertson, and Elle Leonard, to name but a few. When Frank expanded into the world of molten metal, a new set of apprentices came to master the bronze-casting process, including Frank’s younger son, Sean. For a period of years, father and son operated a second art foundry near 5th and Central in Sarasota. 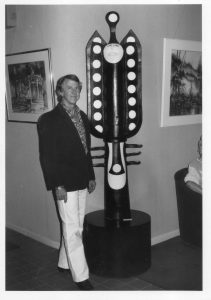 After Prentice-Hall published his book, Kiln Building with Space Age Materials, Colson was invited all over the world to exhibit work, build kilns and conduct workshops in both clay and metal casting. Increasingly he broke away from traditional pottery to develop powerful pieces that were extremely personal, mingling the ancient with a time that has yet to come. In the 1980’s he was given a one-man show in Rockefeller Center in NYC.

Frank was also commissioned to cast public statuary in Sarasota, such as the Frank Lloyd Wright sculpture at Van Wezel Performing Arts Hall and the World War I Doughboy in the park at the foot of Main Street and Route 41. His personal artwork is part of the collection of the Fine Arts Society which is displayed at the Van Wezel. Every few years, both house and studio have been part of Sarasota’s Creators and Collectors Tours.

Frank Colson has been described as a neo-primitive who interpreted the many cultures in which he lived. He drew great inspiration from his travels to exotic locales: Japan, Indonesia, Russia, China, Guatemala, Spain, Vietnam, Sweden, Peru, New Zealand, Mexico, Australia, Brazil, Panama.

Masks were very special to him. The exteriors of both home and studio at 1666 Hillview display relief panels in clay inspired by primitive New Zealanders. Inside the house, a screened atrium is rimmed by masks which echo the Mayan cultures of South America. An occasional bronze mask shines forth, adding the element of surprise.

His creations are highly original, often humorous, and always intriguing. Besides working in clay and in bronze, Frank worked in glass, fabric, mixed media and fiber-optic sculptures. A few of the pieces being offered for sale may be seen at www.FrankColson.com. Three of the tall “Effigy Forms” exhibited in Rockefeller Center are included, as are a few of the fabric wall hangings he created in Bali and exhibited in one-man shows in Barcelona and Stockholm. 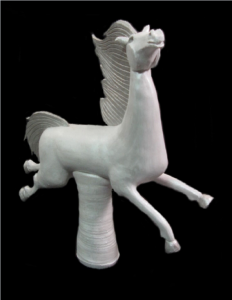 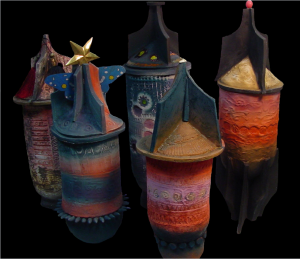 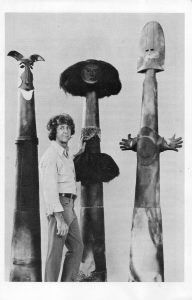 Frank Colson passed away in 2015, and the Colson era at 1666 Hillview is now coming to an end. The historic home and studio are being offered for sale, as are many pieces of both Frank’s artwork and pieces he and Diana brought back from their travels around the world.

On Saturday, December 10, you have an opportunity to see this place that has contributed so much to the culture of our community.