Martha Smith grew up in a small harbor-front town called Mattapoisett, located near Cape Cod, Massachusetts, on Buzzards Bay. The youngest of five, the siblings all became artists in one medium or another. Like her brothers and one sister, Martha is a musician as well.  She attended SMU South Eastern Massachusetts University, now called UMass Dartmouth. She also did a lot of summer sailing, most often on a French-built wooden 56’ boat named the SAUDADE. Sometimes she even raced on an “Evelyn 32” called ZEITGEIST out of Noank, Connecticut.

Martha’s father was an artist and an architect, her mother a photographer and a horticulturist/ tennis player. Her father built a studio in 1971 at their home. It was 40 feet long by 25 feet wide, and all its windows faced north because—as an artist—her father coveted the north light. She speaks fondly of her Dad. She recalls standing at her father’s knee watching him paint and draw as he taught her about color, light and architecture. “Before I was born, he spent a year sailing and painting his way around the Caribbean, and I grew up surrounded by his paintings of that adventure!”  Perhaps that’s the reason Martha gravitates towards painting the warm colors of the tropics, its water views and Caribbean whimsy.

A few years after her father died, Martha took over the studio. She painted furniture and murals for 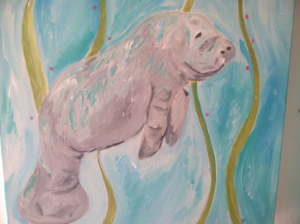 a living, putting her son through Tabor Academy, a well-known prep school in Marion, Massachusetts.

One Christmas, she told her artist friends: “Hey! Let’s clean up the studio. We can do something here for Christmas—soaps, candles, jewelry, burned out velvet scarves.” This “temporary” shop was so successful that it quickly sold out of just about everything. Branches that had been covered with hand-made ornaments were now stripped bare! Artist-friends called other artist-friends, and the shop was soon restocked. Named SAIL AWAY STUDIO, Martha’s small boutique took on a life of its own.

Before long, Martha came upon an empty storefront in Wareham Mass., two towns away. She rented that storefront, expanded SAIL AWAY, and kept her Dad’s original studio as a production shop. The boutique stayed open for 7 years. During that time she also served as her mother’s caregiver for 12 years. After her mother passed away, Martha closed SAIL AWAY STUDIO and moved to Sarasota.

One of Martha’s artist-friends was Chris Bales. Martha had been carrying Chris’s jewelry for years in 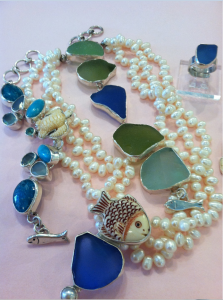 Massachusetts. After Chris moved to the Myaaka area, Martha called her, and Chris told her to check out Siesta Key. “I drove over Siesta Bridge on a perfect blue-sky day with crystal glass green water glinting on the bay. That was it!” She called a realtor and started looking for a new beginning.

Before long, Martha opened a boutique right on Siesta Key. She named it LE GRAND BISOU (French for “The Big Kiss”.) In addition to clothes and accessories, Martha hung some of her own paintings in that shop, and also carried a few of Lisa Grimes’ Mosaic fish. Many customers admired the art work, and asked where on Siesta they might see other local art. Martha realized that Siesta Key was missing something—an art gallery featuring the work of local artists.

By now, Martha had made a wonderful group of friends who had become her surrogate family. “I’ve always loved collaborating with other artists, so it seemed a no-brainer to open an art gallery here, a place for locals to show their talents!” Martha moved her boutique a block down the street, and renamed it ISLAND BOUTIQUE. (When you stop in, ask her about the name change—it’s funny!)

A group of artist-friends took over the address at 5129 Ocean Blvd., creating a co-op gallery called THE GALLERY ON SIESTA KEY. Chris Bale’s Jewelry is still featured at this gallery because Chris is a local artist. Today each member of the group takes turns running the gallery and showing their work. Says Martha: “I have high hopes that this will be a fruitful endeavor! It is ever changing and evolving. We are always looking for more talent, especially artists working in ceramics and glass.”

The gallery currently features the work of 11 artists, including Martha Smith, who displays not only 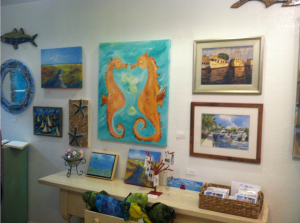 her acrylic paintings and furniture, but also a lovely collection of hand-drilled sea glass and pearl jewelry of her own design. (SIESTA SAND will be featuring articles on several of the other co-op artists in future issues.)

Plans are that THE GALLERY ON SIESTA KEY will host monthly “gallery nights” starting in April. The place is artist-run and operated, and hours are posted on the door, Most days it’s open from 10 -2 or from 3-7. If the doors are closed, you can always call 508-971-4410 for an appointment. One of the neighborhood artists would be glad to come down and show you around!

A Taste of Germany has German food on Siesta Key