Ann Darling has owned and operated the Darling Pottery Studio in the Gulf Gate area since 1974.  A master potter, Ann not only creates her own impeccable work, she has inspired dozens of enthusiastic students for over 39 years.

A native of Sarasota, Ann grew up in the McClellan Park area, where she began studying pottery at Brookside Middle School. She went on to obtain a degree in psychology from Stetson University in Deland and completed graduate work in art at Illinois State University.

In the past had you gone to the Sarasota Farmer’s Market downtown at Main and Lemon, you might have seen Ann there. For two years she was at the market every Saturday from 7am until noon with a full display of work for sale and a pottery wheel spinning. Darling studio now displays work at the Phillipi Market , a Wednesday market which will begin again in October.

Her work is beautiful and polished, and she has been honored with many awards and exhibitions. Ann has had solo exhibitions at the Hilton Leech Gallery in Sarasota and at the Manatee Community College South Campus Art Gallery.  Her work has been shown at the Ringling Museum Crafts Festival, the Las Olas Art Festival, the Miami Grove Show, and the Winter Park Art festival.  Her work was also included in the Lowe Art Museum’s exhibition of Women Artists in Florida. Her reputation extends internationally, for a number of her pieces have been accepted at the International Competition of Ceramic Arts in Faenza, Italy.

Ann and I go back to the 60’s when she apprenticed in pottery with my husband, Frank Colson, at his Hillview Street studio.  The three of us traveled for an entire summer to St. Andrews, New Brunswick, Canada, where Frank headed up The Sunbury Shores Arts and Nature Centre. In addition to helping out at the Centre, Ann and I took turns chasing my two pre-school sons around beautiful St. Andrews, eating lobsters, and trying to swim in the waters of the frigid Bay of Fundy. We even went ice skating at the local rink with General Westmoreland’s wife and her two little girls!

Ann and I also taught school together in the 70’s at Southside Elementary School, where she was the art teacher and I was the “Song & Dance Lady.”  My fondest memory was putting on a musical called YELLOW SUBMARINE with 6th grade students. For this extravaganza, Ann had her students create a wonderfully original submarine out of painted plywood. My four lead “BEATLES” strutted back and forth across the stage holding up this magical prop to the delight of an enthusiastic audience.

For as long as I can remember, Ann has been a serious student who continued to meticulously hone her skills. In addition to working with Frank, Ann also worked with Cynthia Bringle, Paulus Berneshon, and Toshiko Takaezu at Penland School of Crafts in North Carolina, all giants in the field of pottery. For several years she was an art therapist at Gulf Gate School for Adjustive Education, combining her psychology and art education to work with emotionally disturbed children.  She has also served as an adjunct art professor at Manatee Community College South Campus in Venice.

Ann was married to Sumner Darling, a gifted architect who designed and restored such landmarks as the Sarasota Arts Center.  Sadly, Sumner passed away in 1975, leaving Ann with one three year old son and another three months old.  He also left her with the plans for a pottery studio, but construction of the studio was still a dream.  Local architects Bob Morris, Stewart Barger, Carl Abbott, Jack West, Tolyn Twitchell, Don Wilkinson and Dick Allen all rallied to the cause and donated weekends to bring Ann’s school building into completion. With a young family to support, she diligently went to work, turning her studio/school into a thriving business. 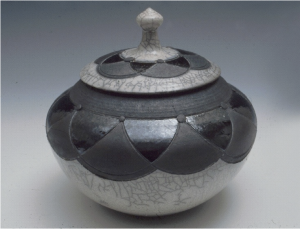 Today at Darling Pottery Studio in Sarasota, students learn from a master potter using classic throwing techniques. The school has 13 kick wheels and 6 electric wheels.  Ann’s students are not only given instruction in glaze formation and hand building, they are encouraged to use these skills to develop their own creative expressions.

Today Ann lives in a remarkable residence designed in 2002 by the eminent Sarasota architect, Carl Abbott.  It is a triptych of buildings which was uniquely designed to meet the needs of Ann and both of her sons, Sumner and Glenn.  The result is a complex of three living spaces unified by common materials, especially concrete.  Abbott so respected the site and its abundant reserves of oak trees that this handsome residence has been written up in dozens of magazines and newspapers. Today her son Sumner and his wife still live next to Ann on the beautiful property along with their little twin girls.

The Darling Pottery Studio is part of the Darling Apartments town house complex located at 2211A Bispham Road in Sarasota, just minutes from Siesta Key.  Both Ann’s work and student work are on display at the studio. Classes are held on Tuesdays and Thursdays 9 a.m. to noon and 7 p.m. to 10 p.m.  For more information, call the studio at 941-922-6059 or 941-923-4401.