A remarkable artist lives here in Sarasota: a creative historian, musician, and folklorist with a passion for America’s past. Bill Schustik is 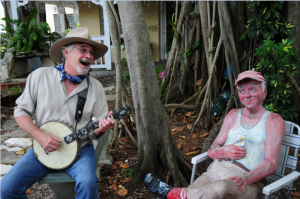 his name, and he has been on a lifetime adventure performing all over the world to captivate audiences with his boundless energy and skill.

A true troubadour, he unpacks his instruments and props wherever he finds an audience. He has performed in over 2,000 villages, towns and cities across the United States, including Washington D.C., where he enchanted three U.S. presidents with a series of historical presentations.

At the Ford’s Theatre Reopening Gala in 1984, President Ronald Reagan was to say: “Nancy and I are honored to be here tonight. And I know I speak for everyone in the audience when I thank Bill Schustik, the playwright for the play, and the entire cast of On Shiloh Hill for that magnificent performance.” President and Mrs. Reagan were in attendance along with then Vice President and Mrs. George Bush.

In addition to performing for soldiers, sailors and airmen world-wide on Armed Forces Radio Network, Bill has carried America’s message to millions of listeners world-wide on Voice of America radio. He has performed at many Opening Ceremonies, including those of the World Series, Fort McHenry Tunnel, and the U.S. Monitor National Monument. He served as the Official Chanteyman for Operation Sail in New York Harbor in 1976, when America celebrated its 200th birthday by bringing in for the first time a world-wide flotilla of Tall ships.

To mention just a few of his accomplishments, Schustik was creator and co-producer of an award-winning television program, Tales of the American Troubadour, which garnered a 2009 Telly Award. In 2011, he wrote and performed The Battle of Ridgeway with Senator Marlow Cook (retired) at the FSU Asolo Theatre for the Performing Arts right here in Sarasota, Florida. Never one to limit his creative spirit, Bill is also the author of two critically acclaimed full-length ballets.

Adopted by parents with a profound love of history, and inspired by his deep curiosity as a child growing up in upstate New York, Schustik has spent his life studying American history. He looks much deeper than textual accounts, combining fact with folklore to emerge with a story that is as captivating as it is enlightening. In 2004, thanks to the “Artists in Schools” program in Sarasota County Schools, Bill performed for hundreds of our local schoolchildren. 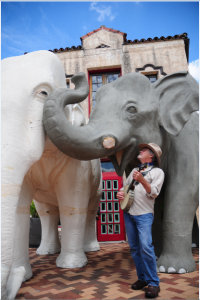 Confronted by a classroom of self-conscious adolescents, Schustik would growl: “You want the real story?” “Yes!” the kids would cry. Then off he would go, donning a kepi, vest and boots, telling inside stories about the Confederate and Union soldiers in a way the kids have never heard them before. He communicated factual history through the use of entertaining anecdotes, never standing still. He marched from one end of the classroom to the other, expertly playing the banjo or guitar as he sang American folk songs, periodically pulling new props from his bag to enhance the role of the moment. During my tour of duty as a teacher at Ashton Elementary, I was fortunate enough to witness one of Bill’s performances, and it was riveting!

Students learned it was Jeffrey Amherst—and not the Indians—who invented the barbaric practice of scalping to substantiate the number of Indians he had killed and would be compensated for. Students were to learn that early colonial soldiers once stuck feathers in their battered hats, emulating a type of aristocratic style of the day known as “macaroni.” Hence the famous line from Yankee Doodle “. . . He stuck a feather in his cap and called it macaroni.” Students also learned that the three-cornered hat was designed to catch the wind in such a way that the hat was stabilized to the head and did not blow away.

Most recently, Schustik created and starred in The American Civil War in Legend and Song, which was produced at The Theater of the American South, and later—in 2013—in Boca Grande, Florida.

In July 0f 2013, he presented a Dramatic Reading and a Musical Resurrection of the American Civil War entitled Many Thousand Gone to a packed audience at St. Andrew United Church of Christ here in Sarasota. He conceived and wrote Many Thousand Gone using songs, written letters, diaries, and collected memories of those who lived through a most desperate time in American history. Along with twenty or so other performers, the brilliantly talented Sharon Scott was featured in this production, her rich, magnificent voice enhancing the heart-rending spirituals which so dramatically illustrated African American participation in both the agony of slavery and the struggle to freedom.

Bill Schustik is often accompanied by his wife, Lisa Fudge, as he plays the guitar, banjo, harmonica, dulcimer, jew’s harp and concertina. 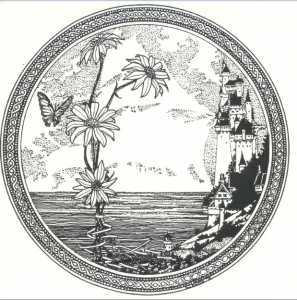 He punctuates his inspirational tales with song and yodeling. When not busy writing a new production or performing on stage, Bill busies himself by creating whimsical drawings and sandcastles!

To learn more of this extraordinary artist and his upcoming performances, go to www.americantroubadour.org. To engage Bill Schustik to perform one of his shows or stage productions for your organization, or to discuss tailoring a new program, he can be reached at 941 – 922 – 0234.