An amazing Botanical artist lives in our midst. Her name is Olivia Marie Braida-Chiusano, and her

elegant works hang in major collections and museums, to great critical acclaim. She is not only an exquisite artist; she is a greatly respected teacher.

The creation of Botanical Art is both detailed and meticulous, and Olivia’s path to becoming a master in this field was extraordinary. Olivia Marie Braida was born in 1948 in Manhattan and raised in the Bronx. She had one sister by the name of Penelle. Her artist mother painted backdrops for the theater, while her father was a true Renaissance man, a multi-lingual inventor and diplomat. Olivia’s childhood passion was ballet. She reveled in her urban, cultured environment—a New York City child who loved spending time in museums. She found the classics compelling, and her favorite artist was Vermeer.

For generations both sides of her family had been entrepreneurs, so Olivia studied Business Administration in college, along with Art and Writing. Her early artistic career included designing clothes, jewelry, and pottery.

In 1978 she married John Joseph Chiusano. Within two years they opened their own National 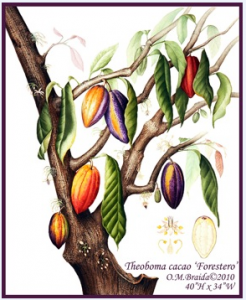 Transportation Company, Master Messenger, Inc., delivering what others would not handle, such as wedding cakes and six foot Santas. Their company won six ‘Business of the Year’ awards from 1986 to 1991, and Olivia was named Woman Entrepreneur of the Year in 1987.

In 1993, they sold their business. Olivia returned to her love of fine art studying oil painting and pottery. On one bright sunny day, she took her first botanical art course at the New York Botanical Gardens, got hooked, and became a Certified Botanical Artist in 1995. She then was to meet Anne Marie Evans, an Artist-Educator who introduced her to the Botanical Style of the 17th century French Court. Fascinated, Olivia followed Anne Marie to England to continue intensive study.

As patron, Louis XIII ( 1601-1643) had been a major force in the development of this art form, as was his younger brother, Gaston, duc d‘Orleans, a keen botanist and passionate collector. (As DeMedicis, they also exhibited a darker side: but therein lies another tale.)

In London, Olivia was able to physically hold and view with a magnifying glass the centuries-old paintings of Botanical Art Masters at the Lindley Library and the British Museum. This period of Botanical Art resonated with classical mastery, and Olivia fell passionately in love with the work continuing her classical studies with Cesar Borgia in New York. 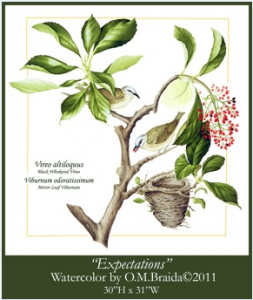 Museum d’Histoire Naturelle in Paris. She was stunned by the brilliance of painters such as Daniel Rabel (1578-1637), Nicolas Robert (1614-1685), and Gerard Van Spaendonck (1746-1822) and Pancrace Bessa (1772-1835) the prized pupil of Pierre Joseph Redouté (1759-1840).These Official Botanical Illustrators produced highly detailed paintings depicting rare and unusual flowers in the royal gardens: all of their works were richly colored and painstaking layered to produce a three-dimensional effect on “Vélin” (“calfskin”).

Inspired by classical realism, Olivia began explaining her botanical art technique as the OM BRAIDA MATRIX THEORY, based on Renaissance Art and Leonardo De Vinci’s theories of Aerial Perspective and “light passing through planes.” She become so immersed in exploring this theory in her own botanical artwork, that commissions and exhibitions poured in for Olivia’s own large watercolor botanicals, many of which now hang in major collections and museums.

Recommended by Anne Marie Evans to teach, Olivia worked from two New York Studios, Studio 101 and Studio 65. Olivia’s New York students urged her to compile all her teaching materials into textbooks. Her teaching association with the Ringling College of Art and Design (1998-2011) was the basis for the Botanical Art & Illustration Certification Program, which she designed and taught at their request. As a result, these two external forces brought about the realization of twelve textbooks and 13 supplementary course paks designed to take students through four levels of drawing, four levels of paintings, pen and ink and more!

In 2004, she established her own school here in Sarasota—The Academy of Botanical Art—making 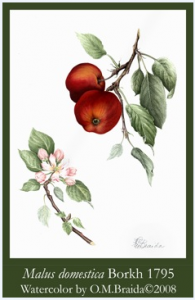 her classes available to distant learners as well as local students. By 2010, the Academy had become the official botanical art school of the Marie Selby Botanical Gardens, and the Gardens became the certifying body to graduating students. Today, Olivia’s school, books, and teaching methods are available through her Distance Learning Program, which attracts students in the US, Canada, Europe, South America, Australia and Mexico.

In the words of Susan White, former Curator of the South Florida Museum: “Her exquisite compositions are of the highest professional level and pay homage to the great masters.”

Like her mother, Olivia Marie Braida is an artist. Like her father, she evolved into a Renaissance person. Like her mentor, Anne Marie Evans, she has become a master educator.

Locally, Olivia’s elegant work may be seen at STAKENBORG FINE ART at 1545 Main St. in downtown Sarasota. It will also be included in the Instructors Exhibit at Selby Gardens from June 26-31.

Olivia can be reached at www.omartdesigns.com. Her sister, Penelle Braida- Skinner, lives in the area and is a writer.