The pilot for a new half-hour comedy series is being shot here in Sarasota. The show is called Rental, and Bob Gray is creator, executive producer and writer of the series. Bob is head of the Digital Film Program at Suncoast Technical College (STC), and a well-known Sarasota filmmaker. He is also an Emmy Award-Winning Comedy Writer. 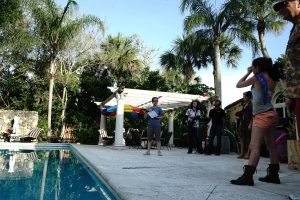 The story is set in the mythical town of Sunset Beach, Florida—a place which is certain to remind people very much of Sarasota. Orensis Films, a premier gulf coast production company based in Sarasota, is co-producing Rental.  They supply cameras, cameramen, lighting, production gear and other personnel. Trishul Thejasvi, Millie King, and Thomas John Nudi, all with Orensis Films, are working with Bob on the Rental project.

Another producer is Sarasota neurosurgeon, Dr. Jim Schumacher, a film enthusiast and partner in Olive Productions of NYC.  His cohorts at Olive are Steve Buschemi, star of Boardwalk Empire and dozens of feature films, and Stanley Tucci, acclaimed actor, producer, and director. Ideally, each episode of Rental will bring in a well-known actor as one of the renters.

Bob was inspired by a real-life situation. The seed of the story was planted when friends of Bob’s bought a vacation rental as an investment property, one which they planned to rent out on a weekly basis. When Bob heard them talk about a wide variety of issues and problems inherent in handling weekly rentals, he knew he had a story. He has been working on the project for the past year and a half.

The tale centers on an old Florida beach house that sits on a secluded, private beach, with a guest cottage located a little further down the beach. The property is located on an idyllic cove right on the Gulf of Mexico, a bit of old Florida. Each week a completely different set of people come into the house, and each week brings a vastly different set of issues. The first four episodes have already been written. 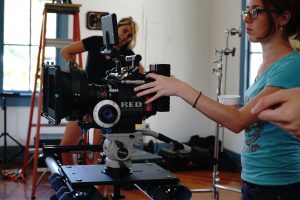 Bob Gray’s role is to supply the story, cast the actors, and direct the episodes. He and his co-producers are currently creating a pilot teaser that introduces the setting, the characters and the humor. The end result will be a 10 minute video, four finished scripts, and a document known as a “Show Bible”, which gives an overview of the entire first season. These materials are essential for marketing the series.

The project has been entirely self-funded. When the package is assembled, it will be presented to streaming services such as Netflix, Hulu, and Amazon to see if any of these companies are interested in picking the show up and funding it. The producers of Rental also will take the project to local investors to see if they can obtain funding and shoot the entire first season.

Two Screen Actors Guild (SAG) actors are in the cast, one being Brandon Tyler Jones. This talented actor played Monty in Monty Comes Back, an Orensis film which was presented at the Sarasota Film Festival in 2016, and won the Audience Choice Award.

27 year old Brandon lives in LA, and is being flown in to play Rental’s lead character, Matt Steven. Says Bob Gray, “We discussed Brandon from the very beginning because he’s so right for the lead in RENTAL. We are going to be a SAG Signatory Production under their new Media Contract Rules which are designed for use with companies like Netflix and Hulu. SAG has more relaxed rules for these new streaming services.” 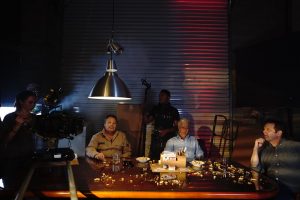 Kim Crow – a local SAG actor– is playing Meredith Porter, a widow who was the original owner of the fictional beach house. Meredith wills the house to her handy man, Matt. When Matt moves in to take care of the house, he finds Ray – Meredith’s deceased husband – still inhabiting the house as a ghost.

Matt and Ray unite forces to preserve this iconic piece of old Florida. Their goal is to keep the idyllic beachfront property out of Ray’s brother’s hands – a man by the name of Colt Porter—a developer hell-bent on paving over every inch of the town.

It’s the old story of preserve or develop, a topic John D. MacDonald once addressed in Flash of Green.

Local actor Mark Troy is playing the role of the villain, Colt, while the whackadoodle ghost of Ray is played by, Jamie Blond, a stand-up comic who has plied his trade in NYC and elsewhere. Tampa’s Natalie Pitcher will be the lead actress, Eve Rosencrantz. 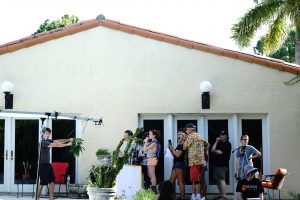 Several of Bob’s former students from STC are helping with the production.  According to Bob, “We are trying to use local crew and talent as much as possible. We are probably 95% local, taking advantage of all the talent and skills we have in the Gulf Coast area.”

Much of the 10 minute pilot was shot in June at the beautiful old Spanish house owned by famed Sarasota hairdresser, Ana Molinari. Says Bob, “The stuff we shot there is to establish and introduce the characters, the setting, the tone of the thing. Ana is not only providing the house, but also the models for the opening title sequence as well as doing makeup.”

In addition, a funeral scene was shot at Sarasota’s picturesque Crocker Church, and I was invited to be one of the extras. I got out my black dress and big picture hat, and trotted over to be one of the mourners. Should this series go into production right here in Sarasota, you too might have a chance to claim your 15 minutes of cinematic fame!

As we go to print, Bob Gray remains hopeful of finding a beach house location on Siesta Key which can be used as the ultimate location.  The plan is to have Rental in full-fledged production by next summer at the latest.  boy grey, sarasota film,

The Creative World of Diana Colson