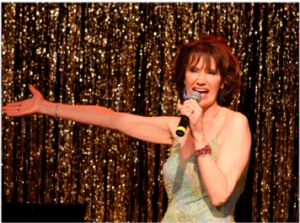 The room was packed with gents and ladies, all waiting to be beguiled by a cabaret songstress. The pianist—Bobby Brader—took his place at the ebony grand, and the crowd warmed to his piano introduction.

A tall, long-stemmed brunette stepped out onto the stage. It was Diana Vytell, attired in a glittering gown of pale greens and blues, delicate ruffles cascading diagonally across her slender body. This dress was elegant and glamorous, and so was the lovely Ms. Vytell.

Tonight’s show was called Live, Laugh, Love, and it stirred together a collection of  pop, standards, and cabaret songs, punctuated with a bit of charming chatter.

Ms. Vytell launched into her opening number and the classic strains of Almost like Being in Loveby Lerner & Lowe washed over the room. One could feel smiles spreading across the audience.  Ms. Vytell paused between numbers to speak of the elements of love: excitement, questions, risks, mistakes, lessons, and drama.  Other iconic lyrics soon rang out, including the seductive “Love me tonight, and let the devil take tomorrow…” from Hill and Allen’s Kiss of Fire.

After a flirtation with Rogers and Hart and their playful creation I Wish I Were in Love Again, Ms. Vytell wrapped herself in an enormous mauve boa, and emerged as a total Francophile.  “My relationship with France began in high school.  I studied French, and was instantly seduced . . .” She then performed a medley made famous by Edith Piaf. The set included C’est Si Bon, La Vie En Rose, April in Paris, and I love Paris, and her delivery of these songs was appropriately seductive and charming.

Diana came to the world of music as a very young child. Her mother was a trained singer, and her first inspiration. From the time Diana was a toddler, she was performing on her grandmother’s washtub in the back yard to the delight of all the neighbors. Before long she was performing in her Daddy’s tavern, sitting on the bar.

Diana began the formal study of voice at the age of 13, and continued through her college years as she performed in solo recitals, concerts and plays. She attended the Hartt College of Music to study opera, and also continued to explore acting and musical theatre. Her first professional opera experience was singing in the chorus of Aida with the Connecticut Opera surrounded by a collection of animals!

Although her mother was hoping she would follow a career in music, Diana opted for the more practical road. After college, she became an educator, teaching French and English, and counseling high school students.  She never let go of performing, however: while maintaining her demanding teaching schedule, she played the role of Tosca with the Connecticut Opera.

Diana made her European debut on Greek National Television in La Traviata. She went on to spend summers performing throughout the U.S. and Europe in both opera and musical theatre. She also sang in concerts given by members of the Yale Strings and the New York Philharmonic.

Diana sang the role of the mother in Tales of Hoffman when it was performed by the New York Opera.  She acted in The Vagina Dialogues at the Venice Theatre in Sarasota. She played Kate in The Taming of the Shrew with the Southern Connecticut Summer theatre.

Her eclectic background— which included speaking four languages— led her to psychotherapy.  She left the field of education and received additional training in psychology with emphasis on integrative mind-body techniques, earning the tongue-in-cheek title of “the singing shrink.” She took a hiatus from singing and opened a psychotherapy practice. Still, Diana could not forget her music. She soon found herself drawn to the world of the cabaret. Of this remarkable transition, she had this to say: “What better challenge is there than sharing one’s view of life, and communicating it to bring pleasure and joy to the world.”

Music and psychotherapy are Diana’s two loves. She subscribes to the work being done by Daniel Levitin, a researcher at McGill University in Montreal, who is one of the leading investigators of the effects of music on the brain. Levitin visualizes a day when physicians might prescribe music rather than pharmacological drugs, a philosophy in which Diana is in accordance.  Non-invasive, safe and natural, music could well be the most affordable therapy in the world. 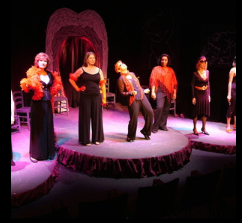 Diana Vytell has a passion for performing for fundraisers and local charity organizations. Since music and singing are healing arts, those of us who are performers have the wonderful privilege of moving people in extraordinary ways.  Of her work as a cabaret singer, she said: “I hope some of my songs make you smile. It’s especially lovely if some of them help you reflect on your life. Through music, you and I share a special connection. It’s a wonderful feeling!”

For updates on upcoming performances, this unique songstress may be reached through her web site: www.DianaVytell.com