A Martini May Save Your Life 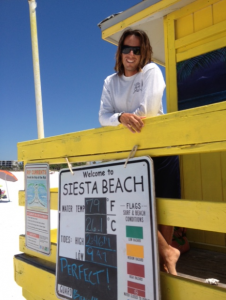 Siesta Key lifeguard, Robert Martini (28), has been standing duty overlooking beachgoers on the crystal waters of Florida for the past 11 years, seven of those years on Siesta Key.  On any given day, you will find Martini on duty at the yellow lifeguard tower.

Martini grew up in Georgia, about an hour outside Atlanta. His family eventually moved to Fort Lauderdale, where he first began serving the community as a lifeguard, and then moved to Bradenton to live with his grandmother.  He currently lives in Sarasota with his wife, and just celebrated their first wedding anniversary.

Martini is certified as an Emergency Medical Technician (EMT), and a First Responder, through the American Heart Association and the state of Florida. His EMT certification must be renewed every two years. Along with these, he also earned a high-surf jet-ski certification, training in Daytona and is a rescue and master diver.  As part of his continuing education, Martini will attend a United States Lifeguard Association Academy (USLA) class in Ft. Lauderdale this December.

Competition comes easy for Martini. He competes regularly in national and world lifeguard competitions. Not long ago he competed in the Gulgong Gold, a 47km swim, run, paddle and surf ski race in Australia.  Later this year he will compete in the East Coast paddleboard championships and the ULSA lifeguard championships in Pompano. These championships include a lifeguard representative from almost every lifeguard agency in the state of Florida.

The water/man aspect of being a lifeguard is very satisfying to him as he feels more comfortable and at peace in the water than he does on land.   But he also loves interacting with beach patrons and helping to educate them about all the tropical animal diversity as well as teaching them about beach rules and ordinances.  “Beachgoers should not be afraid to ask a lifeguard about swimming conditions, or why they’re flying a certain flag,” he said.

A graduate of Manatee high school, Martini also enjoys giving back.  By donating his time, he has raised $8,000 for the junior lifeguard program. 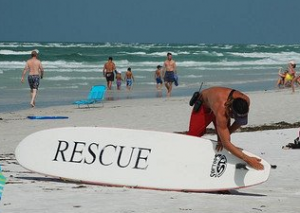 “In 2007 a woman was being assaulted in the bathroom of Lido Beach. Myself and another lifeguard chased him for about a mile. After jumping a fence and then into a canal, we swam after him and apprehended the man. The man is now serving a 30 year sentence for that and various other crimes that he committed.”

With all this training and experience, it’s reassuring to have such a well-qualified professional watching over our beach knowing we’re in good hands.  And, proving the notion that a Martini may indeed be able to save your life could happen.

Another #1 for Siesta Key

The 37th annual Light Up Siesta Village Holiday Parade will be held Saturday, Nov. 26. Festivities start at 5 p.m., beginning at Siesta Center Plaza, 5053 Ocean Blvd.New this year is the judging and awarding of prizes for parade entries.To enter, visit siestakeychamber.chambermaster.com/eventregistration/register/1666.

Get pictures with Santa Paws at Boatyard

The Boatyard Waterfront Bar & Grill will host a “Pictures with Santa Paws” event from noon to 4 p.m. Dec. 3. Bring your fur babies for a photo with Santa and other activities. Proceeds benefit the Humane Society of Sarasota County. The restaurant is located at 1500 Stickney Point Rd. near the south bridge to […]

A handful of establishments on Siesta Key will be open on Thanksgiving and serving a holiday meal. Among them are:

Turkey Trot is Nov. 23 in the Village

The annual Turkey Trot pub crawl on the “Block that Roxx” will be held Nov. 23 in the Siesta Key Village. Seven businesses will be hosting the event: Siesta Key Oyster Bar, Daiquiri Deck, MVP, Beach Club, The Hub, Blase Cafe, and Gilligan’s. Pick up a pre-sale wristband at any location.

Five Siesta Key Village establishments are participating in a pub crawl on Dec. 10 with our furry friends in mind. All proceeds will benefit the Humane Society of Sarasota County. Check in at the Salty Dog between 11 a.m. and 1 p.m. and meet some adorable adoptable dogs!