Satchel’s Last Resort Sanctuary gets some help from Siesta residents 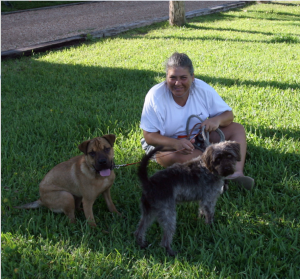 Reva, a Sharpei mix, was picked up by Sarasota County Animal Services in June. She was a stray, about seven or eight months old, and very friendly. But she had two front broken legs —an old injury that hadn’t healed — and 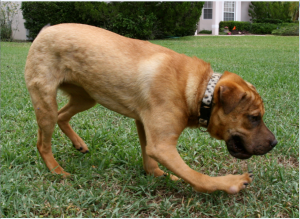 A person on Facebook sent a private message to the animal sanctuary. “They said they witnessed someone driving a tractor trailer throw her out of the window, approximately a month earlier,” said Iris Eastman, executive director of Satchel’s.

Satchel’s led an effort to raise funds to get Reva an operation to mend one of her legs. At a discount, Dr. Colby Bruns, at Tampa Bay Veterinary Specialist and Emergency Care Center, preformed the complicated surgery, re-breaking the bone and putting in a plate and screws. A group of volunteers is currently raising funding for another surgery on the second broken leg. That surgery is expected to take place later this month (October).

Maria and Michael Shay, Siesta residents, have been fostering Reva as she heals and undergoes medical treatment.

“We are waiting to strengthen the one leg, and then have the second surgery done,” Maria Shay told Siesta Sand.

The vet wants us to walk her for twenty minutes a day, but the most she can do is about 15 minutes and her body just gives out,” Shay said. “That is significantly better than from when we first got her.” 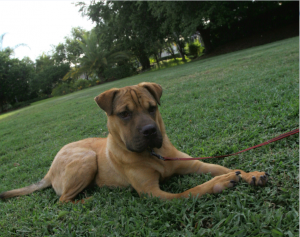 Without the surgeries, Reva’s legs would have gotten worse and impacted her back, Eastman said. When she was first taken in, she was in pain and couldn’t play with other dogs.

Now, however, just one indication that Reva is doing better is she is able to jump on the couch — something she was unable to do before, Shay said.

Maria first got involved with Satchel’s a few years ago. As a volunteer with the Humane Society of Sarasota County, Shay had worked with a dog that was getting kennel stress while at the humane society’s shelter. “We were afraid we wouldn’t be able to adopt the dog out,” Shay said.

Satchel’s took the dog in and began socializing her.

“Their training is amazing,” Shay said of the last resort sanctuary. “I can’t say enough about them. They really go out for these dogs.”

Satchel’s has taken care of dogs that are very shy, dogs used as baits in fighting rings, pit bulls, and dogs that had behavior issues — all pets that traditional shelters often don’t have the resources to work with or have difficulty finding good homes for.  The sanctuary is located at 8101 Coash Road, east of I-75. 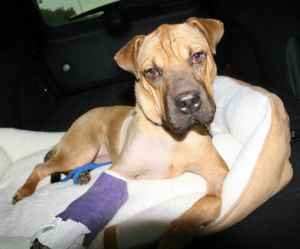 “When people came out [to Satchel’s] he didn’t engage with them. He would see a strange person and turn around and walk back in,” Eastman said. “He was really shy, the type of dog that the average shelter would not invest in, and this is what we specialize in. Another shelter might not have the time or resources.”

Satchel’s eventually matched Winter with a man who loved working with shy animals. “He met with Winter, for three or four months, everyday, to build a bond,” Eastman recalled, soon adopting Winter and taking her home.

Founded in 2001, by Page Knoebel and Michael Giblin, the sanctuary is named after their first dog, Satchel a mahogany Irish Setter. The sanctuary was founded to help animals with medical and behavioral needs.

The Shays are not the only Siesta residents to help the sanctuary.

There is another resident on the key who helps financially with Satchel’s, Shay said.

Satchel’s is a 501.c3 organization that is made possible by donations from members of the community. Those interested in donating or volunteering can find more information at http://satchelslastresort.org/ , and those interested in donating to Reva’s care can find more information at http://satchelslastresort.org/lets-help-reva-walk-run-and-play/.