Hurry Up and Live!

Karen Dobbs is the founder of Hurry Up and Live ™, a lifestyle LLC, which offers beautiful shirts in delicious colors emblazoned with the logo, Hurry Up and Live! The phrase is a mantra—an enthusiastic, positive upbeat statement that encourages wearers to smile, laugh, and create lasting memories.

Born out of the tragedy of terminal cancer, the philosophy is universal. It is a lifestyle decision that serves each and every one of us, for no one can be certain how long their stay will last on this extraordinary planet.

Hurry up and live every moment
Feels pretty good, yeah don't it
Tomorrow is today, don't let it get away,
Life’s a gift, Hurry up and Live!

Those lyrics were written by J.West, W.Robinson, and Karen Dobbs. The song can be heard on the Hurry Up and Live web site. It’s a great song inspiring listeners to seize the day, live to the max, and treasure their lives.

Hurry up and live… like a rock star
Go on and give… give it all you got
That moment you've been waitin’ for
Just walked through the door
This is it, so hurry up and live!

In the April edition of Island Visitor, we wrote of Jack & Jill Late Stage Cancer Foundation, a remarkable organization which treats both parents and children as they deal with the impending loss of a Mom or Dad to cancer. Founded by Jon Albert, the foundation provides opportunities for families to slow down and create lasting memories as they spend their last treasured moments together. These are designed to be happy, joyous experiences, a timeout from the crazy ride of dealing of terminal cancer.

Why does it feel like everything's a rush?
Somebody's always saying hurry up
It's a rat race, and i can't keep pace
What do you say maybe you and i
jump off of this crazy ride
goin' round and round and round
yeah, let's slow it down… 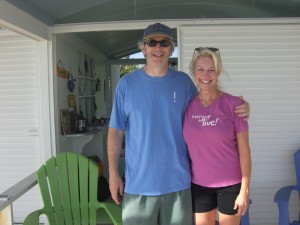 Far too prematurely, Karen Dobbs and Jon Albert each lost beloved spouses to cancer. By the time they met, both were living as single parents and raising teenage children. Realizing the importance of creating positive, cherished, lasting memories as a family, Jon had founded Jack & Jill Late Stage Cancer Foundation in 2006 after his wife had passed away.  In 2008 he was introduced to Karen Dobbs, a Nashville realtor and Delta Flight Attendant. The introduction was made by a mutual friend who thought Karen might help Jon network his fledgling foundation.

It was intended to be simply a business dinner in Nashville.  Karen and Jon met at the restaurant at 6 pm. Of this meeting, Karen says: “When I walked in, his eyes were bright. I could tell he was full of life.”   They were to talk for the next nine hours, sharing similar life experiences. A romance was definitely being born.

Jon says: “I don’t have any spiritual answers. I just know that life is short. If you’re not careful, life can just pass you by.” In their first conversation, Karen declared: “I can’t wait for my Golden Years. I’ve just got to hurry up and live!” Jon immediately realized the power of that statement. He loved the mantra so much that he had her girlfriend make about a dozen shirts with that logo imprinted on them.  He also insisted that she trademark the phrase.

In 2011, Karen and Jon bought a house in Sanderling on Siesta Key.  Relying on photos and videos, they made the bid sight unseen before flying down to close the deal. (She was, after all, a successful realtor in Nashville, and knew how to play the game.) Today, they love their Sanderling ranch house, and especially their beachfront Cabana. They go there almost every evening to meet friends, and toast the sun as it sinks slowly into the Gulf. ”We bought our Primary Home, our Secondary Home, and our Retirement Home all in one package,” grins Jon.

Not gonna wait for my golden years
Gonna light the fuse right now, right here,
And enjoy the show from the front row

The couple was married at the Sanderling Club House on January 2, 2012, blending their two families. Instead of a “Honeymoon”, the Dobbs-Albert unit embarked on a “Family Moon”, taking all four offspring to South Africa on a real Hurry Up and Live trip, where they hiked, went on Safari, and saw penguins.

Since Karen is still a flight attendant with DELTA, travel is part of their life.

When i hear that alarm go off
Can't wait to jump up and turn it off
No, i can't be late
Gonna seize the day

Karen and Jon are a wonderful couple with a marvelous philosophy of life. Today, beautiful t-shirts in luscious colors

may be purchased from www.Hurry Up and Live.com, with part of the proceeds going to Jack & Jill Late Stage Cancer Foundation.  As one of JAJF’s sponsors, Hurry Up and Live has sent at least one family a year on an unforgettable trip where families may gather irreplaceable memories.  Karen envisions her line of clothing being carried by local stores, and broadening it to include yoga and other athletic wear.

In Karen’s own words: “Every day is a blessing! Love, laugh, travel, dream and pursue. Hurry Up and Live!”