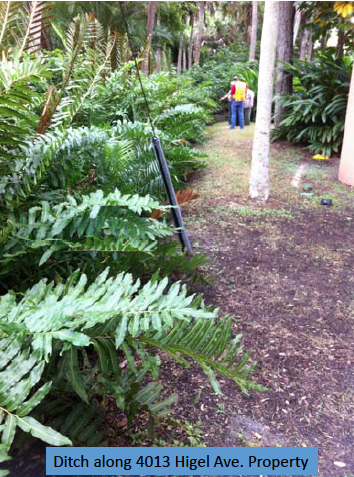 Drivers on Higel Avenue recently wondered what was going on as they waited on workers to give them the go-ahead to proceed in single-lane traffic. We have an answer.

Spencer Anderson, Public Works Department director for Sarasota County, reported that the Florida Department of Transportation (FDOT) has been “performing subsurface utility exploration (SUE)” to support the design of a drainage project.

In the summer of 2017, FDOT reported that it was working on a project to alleviate drainage problems in the basin along part of Higel Avenue. “The property at 4013 Higel Ave. is the low point of the local basin,” an FDOT study said. “Flooding occurs along the SR [State Road] 758 corridor and eventually enters a 15-inch cross drain under SR 758 and outfalls to the existing outfall ditch,” the study pointed out.

The study was prepared by Sergio Figueroa, an engineer for FDOT’s District One, which includes Sarasota County.

FDOT “will construct a closed storm sewer system along the west side of SR 758 from Little Pond Lane to Somerset Drive and continue the storm sewer system east directly to the existing outfall, Coconut Bayou,” Zachary Burch, government affairs & communications manager for FDOT, reported in mid-August 2017. “The proposed improvements will alleviate flooding issues along SR 758 and adjacent properties,” he added.

Of the latter amount, $1,291,290 will be from revenue dedicated to District One projects, according to FDOT. The rest will come from funding allocated for “State In-House Project Support” (DIH).

The project length — 0.11 miles — is the distance from Little Pond Lane to Somerset Drive, the listing noted.

A feasibility study is required as part of the application-for-incorporation process, and the Save Siesta Key group has delivered its findings to Tallahassee for consideration by the Florida Legislature. The group hopes for approval there so local residents can vote in the spring on whether or not Siesta Key should be its own municipality. Save […]