Soon after the U.S. Army Corps of Engineers and the City of Sarasota announced their plans for the dredging of Big Sarasota Pass to renourish a critically eroded area of South Lido Key Beach, Siesta residents began pointing to the proposed sand borrow areas and noting something distinctive about one of them.

Borrow Area — or “Cut” — C, they said, sure does look like a designated channel from Sarasota Bay to the Gulf of Mexico.

Yet, as leaders of the Siesta Key Association (SKA) have pointed out, that cut is especially troublesome for property owners on the northern area of Siesta Key and Bird Key. Those people are expected to suffer significant damage because of increased wave energy related to the Lido project, as shown by research undertaken by experts the SKA hired for the December 2017 Florida Division of Administrative Hearings (DOAH) challenge to the Lido project.

“It’s time to start asking why the city is putting the residents of Lido at risk because that particular piece of sand is so important,” SKA President Gene Kusekoski said of the Big Pass sediment during the organization’s June 7 meeting. The 1.3 million cubic yards of sand that the U.S. Army Corps of Engineers (USACE) and the city have set their sights on, Kusekoski stressed, is “150% the size of The Vue and the Westin,” referring to the condominium complex and adjacent hotel at the intersection of U.S. 41 and Gulfstream Avenue in downtown Sarasota.

Siesta organizations and residents opposed to the dredging of Big Pass have offered full support of renourishing South Lido, but they have called for the USACE and the city to use sand from another source.

During a recent telephone interview, Kusekoski emphasized, “Our biggest objection is this Cut C. … They’ve gone out of their way to say this is not a navigation channel,” he added, in spite of how it appears. Yet, he continued, “Once you dig that trench, you change the dynamic of the pass, and God knows what’s going to occur.”

The distinctive design of Borrow Area C has received new attention in the context of the efforts of the Sarasota Bayfront Planning Organization (SBPO) to produce a plan for a new area with arts, cultural and public amenities on 53 acres of the City of Sarasota’s bayfront. Forty-two of those acres are owned by the city. 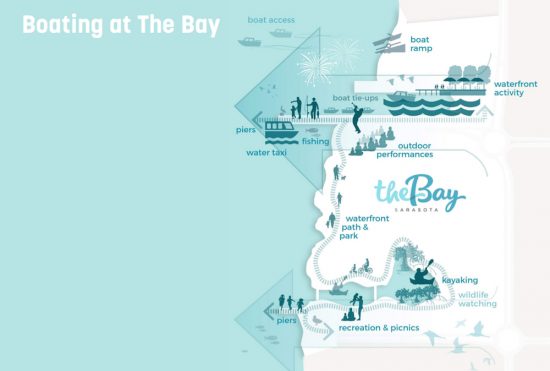 As part of the planning process for The Bay, the team from outside Boston that has been working on designs —Sasaki — also has spent a bit of time learning about the popularity of the city’s 10th Street Boat Ramp.

During the June 7 meeting of the Siesta Key Association (SKA), Director Joe Volpe reported on attending a session for boaters earlier that same week, during which SBPO and Sasaki representatives talked about plans for new restaurants on the bay front and new docks.

Volpe explained that, as a boater himself, he is aware that the three channels that meet off Bird Key create a situation that can confuse people unfamiliar with the local waters. Additionally, he said, “It’s very shallow” in that location. “You can easily run aground,” as he himself has done in his 20-foot boat, he acknowledged.

If that area is dredged, he continued, the channel will be deep all the way to Marina Jack on the city’s bay front.

Then Volpe talked about the SBPO meeting for boaters, noting that the goal with The Bay project is to create a “destination place.” for the public.

“Remember Bob’s Boathouse?” he asked the attendees at the SKA meeting.

The original Bob’s Boathouse, on the northern end of Old Stickney Point Road, drew lots of complaints, Volpe pointed out, because of the high decibel levels and diesel fumes from vessels of patrons of that business who arrived on large boats.

Based on the plans he saw for The Bay, he said, the Sasaki team envisions large vessels tying up at new docks proposed on the city waterfront, so people can enjoy the restaurants and other amenities. And large boats mean deep drafts. A new channel from Big Pass into Sarasota Bay seems to fit into that plan, Volpe added. “Somebody with a lot of money wants this non-boat channel built.”

Volpe also reminded the audience members that the USACE plans call for dredging every five years to keep sand replenished on South Lido. “But they keep saying it’s not a boat channel.”

One audience member, Dr. Stephen Lexow, responded that if Volpe’s observations are correct, “It’s even more important that the [dredging] project be stopped.”

Speaking of the Big Pass dispute …

With a recent request, on July 10, Sarasota City Attorney Robert Fournier provided an updated list of attorney’s fees and expenses in response to the SKA and Save Our Siesta Sand 2 legal challenges to the proposed dredging of Big Pass.

They are as follows:

He then noted other expenses related to the legal challenges.

In response to questions during a recent telephone interview, Fournier explained that the Lido Key Residents Association won agreement from Sarasota City Manager Tom Barwin for the city to cover some of that organization’s legal expenses in fighting challenges to the dredging of Big Sarasota Pass to renourish South Lido.

Fournier earlier had noted that he and Herin of GrayRobinson have to approve any bills submitted by Lewis, Longman & Walker before the city pays them.

Asked about the justification for those payments, Fournier said that if Lewis, Longman & Walker had not been involved, then Herin would have had to have assistance from other staff at his firm, as he would have been unable to handle everything on his own. That would have necessitated extra city payments to GrayRobinson, Fournier added.

Michael Holderness, a Siesta property owner and manager who was one of the plaintiffs in the DOAH proceeding late last year, copied the Siesta Sand/SNL on an email he sent to the city commissioners on July 12.

“The City hired Gray Robinson Law Firm to represent it in the Lido Beach Nourishment Matter,” he began.

“City Attorney Fournier has confirmed the law firm of [Lewis, Longman & Walker does NOT represent the City and the City has no retainer agreement with [the firm],” he continued.

“Under what authority can a City use public funds to pay for the attorneys of private landowners?” he asked. “I think such expenditures may even be illegal,” he added.

“Did the City Commissioner approve this expenditure?

“Please investigate this use of funds,” he concluded.

As of the deadline for this issue of Siesta Sand, we had seen no response from any city commissioner to Holderness in the city’s public email folder.