Investing for you future

Adobe informed their 2.9 million customers of a security breach and advised them to take appropriate action to safeguard their credit card information. However, that was not the real threat posed. Most people reading the article are of course, appalled that Adobe hasn’t protected its customers who use the Cloud version of Adobe. The article made it appear that some brilliant hacker was able to go through the multi-tiered security systems of a private Cloud platform and steal at will. The truth is scarier than that for any business owner or corporation. There is no evidence that the hackers took or were even interested in the credit cards, the common assumption when a corporation is attacked.  This is further supported by the fact that Adobe has known about the breach for several weeks, and has only recently warned customers. This delay would not have happened if credit card information had been stolen.  It is not the credit cards the hackers are after.

The article made it seem as if the hackers that attacked the Adobe Cloud platform were some sort of master-mind-programmers or some brilliant kid taking on big corporate America. The truth is far less newsworthy. 99% of all corporate piracy is from a disgruntled employee(s) who decides to get even with the corporation for whatever grievances.  Criminal hackers want the world to believe they are brilliant. They are not going to admit they bought the information from an insider.  Corporate America often helps with that myth because they try to avoid bringing employee theft to public viewing.  It is just bad press and publicity to do so.

How the breach was discovered:

Special Security Researchers for Cloud technology found a massive 40-GB Adobe source code sitting on a cyber-criminal server. Adobe is a prime target for pirating of its software.  It is the top design software company with many of its products used everywhere by nearly everyone.  It is also expensive, leading to a huge opportunity for pirates who have been selling illegal copies of Adobe software for more than a decade. The piracy of Adobe’s PC application software was one of the major reasons the firm was forced to lay-off workers in 2009-2010. Moving Adobe software to the Cloud was more in desperation to ward of pirates than anything. The value to pirates is in the hundreds of millions.

The FBI has ramped up its efforts to bring international pirates to justice in the past couple of years as piracy has escalated.   At least a trillion, if not several trillion dollars of income from US corporations has been stolen. Sophisticated pirate syndications are worldwide with different key countries used as prime locations for distribution of stolen products and services. But these lost revenue estimates do not include small businesses who are just as vulnerable, perhaps more so.

Relief via a new tactic which is to find the Affiliates who sell pirated copies via smaller websites:

The FBI is taking a different stance than it did a few years ago. The FBI is now going after the pirates’ affiliates which are those individuals who put up small websites, often multiple websites, to sell illegal downloads and illegal copies of corporate copyrighted products such as software, DVDs, and educational/training materials. The affiliate websites are easy to target by the FBI and hauling the perpetrators off to jail and interrogation, can reap huge amounts of information the FBI can then use to build a solid case against the international pirates. Many affiliates are surprised to learn their selling is illegal with the fines in hundreds of thousands of dollars, felony convictions and imprisonment. This past week, the FBI announced the arrest of an international criminal who was a major source of illegal activities on the internet. He was brought down by his affiliates who negotiated with the FBI in return for lower prison sentences and fines.

Criminal activity on the Internet is costing the US economy huge numbers of jobs and a lot of taxes that corporations would pay. Most of the money is going out of the country.  The affiliate pirates who set up sites may think they are doing a great service to the common man, but what they are doing is putting a lot of small and large companies out of business, which is costing ordinary wage earners their jobs.  The IRS is also keenly interested in these affiliate sites of pirates because most are not reporting this illegal activity income. Numerous small companies are in the pirates’ nets but have no idea their software, DVDs, or other copyrighted products are being pirated.  Small businesses which are the largest employer base in America, are losing revenues consistently.  Most small businesses are baffled, not understanding why their revenues and customer base continues to decline despite all of their efforts.  Pirates have bankrupted shockingly high numbers of small businesses in the US.

No company, large or small, is safe from this threat.  Quality products and services are prime targets.  High-end products and services that are more expensive due to the support for the customer are targeted.  An estimated half a million+ jobs have been lost by large corporations in the US due to piracy.  There is no estimate for how many small business jobs have been lost, perhaps twice that figure. Does this mean that the Cloud technology is unsafe? No, it actually proves the opposite.  During the PC networking years, corporations were pirated or experienced corporate theft and had no idea their security had been breached. It was impossible to find the insider selling out the company, when there were hundreds or thousands of PC computers all working independently yet networked together.

Piracy has a devastating effect on the US economy. That is why the Cloud has been aggressively embraced by the corporations at highest risk. With Cloud security, breaches are identified much more quickly with more concise detail, as to what has been stolen and who stole it.   New methods of tagging data, and tracking it to where it was transmitted are employed. This was not possible a few years ago.  Trails are left that can be traced.  Even erased emails are not completely obliterated from the systems since everything is cleared through a central location. 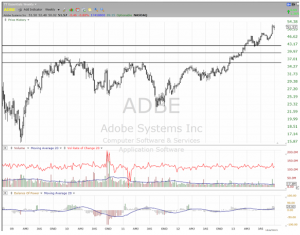 Big Data Analytics are now able to do searches not possible even a couple of years ago.  Employee theft is becoming easier to find. Adobe is working to mitigate any problems for their customer base. To date, no illegal credit card activity has been officially reported.  Cloud Security experts are sifting through the data, finding the breadcrumbs that invariably lead back to the real culprits of the crime.  By having a Cloud based system with central administrative controls, it is far easier to find who perpetrated this crime.  It may never appear in the retail news but the employee(s) or prior employee(s) will be apprehended. The news has not harmed the stock value or trend.

TechniTrader is the registered trademark of Decisions Unlimited, Inc.