HOW I SURVIVED IRMA ON SASHIMI & SHRIMP

I have lived on Siesta Key for the last 17 years. 2004 was the summer of storms. That was also the year when the Category 4 Charley devastated our Gulf Coast area and all of the lesser hurricanes and tropical storms since then like Debbie came but we’ve never had a storm of such magnitude and potential for catastrophe cause so much stress and disruption into our lives over the entire state of Florida as last month’s Hurricane Irma did. 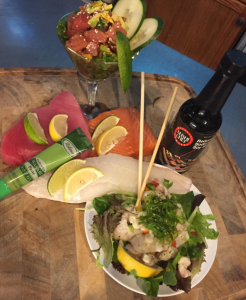 Everybody in Sarasota and on Siesta Key has a story to tell about Irma. Everything from madness on the highways during evacuation to hunkering down at home. I know the stress of this storm brought a lot of us together as I finally met all my neighbors but the anxiety also was extremely hard to handle for most. I know couples who split before the storm over the indecision of should we stay or should we go. There were arguments over pre-and-post Irma that temporarily split some couples and I have friends who hurt themselves because they over medicated. I know of many people who ended up at Sarasota Memorial Hospital after overexerting themselves helping others board up while also protecting their own. I also had a friend who had a heart attack that I would blame on Irma. One fool in my neighborhood lit his backyard on fire while grilling over an open flame in 30 mph winds the day after. He didn’t want to lose his chicken in the freezer, I guess.

I will not lie…this was a stressful time for me as well. After dealing with the early panicked crowds for water, ice and gas, it was time to make my own plan. In anticipation of a power outage I decided that my best plan of action was precooked peel-n-eat shrimp, sashimi grade fish, wasabi and soy sauce. I also bought sandwich ingredients in case I ate all the high-grade sashimi fish. The thought behind this was that I would not have a way to cook once the power was out so eat it raw. On the day of the approaching storm my friend, who decided to ride the storm out with me and my pets, showed up with a flashlight, a bag of batteries and 5 ½ gallons of Vodka. A bit excessive I thought but at least she had her plan for a power outage. We did not eat or drink during the storm as nerves overwhelmed our stomachs and sobriety seemed like the best idea in order to stay alert during a Cat 4. Once the storm passed and the power was out, we had coolers of ice full of precooked seafood and cocktails that provided the energy and nutrition we needed. That allowed us to decompress and survive in a thankful calm while waiting for the power to be restored and allow for the clean up to begin.

Most of us right here at home got lucky. The loss of power, the loss of work and the cleanup has been frustrating and tedious but at least we didn’t lose any lives and we are all here to help each other to get back to normalcy.

Some of us were not as lucky such as my friends in the Keys. One friend of mine in Marathon described the scene as “like a bomb went off.” Since residents were not even allowed back on the Keys for a few weeks, I was told the best way to help the recovery of my favorite staycation was to help financially. Despite our own financial hits, there are many local businesses and individuals in town holding fundraisers/collecting needed items to help with the destruction (kudos to Gilligan’s and Hurricane Mike’s among many others). The Big Water Fish Market is donating $2000 in Home Depot and Publix gift cards to individuals in the Islamorada and Marathon area to those who are in desperate need of help. We have handpicked three families and a business in that area that desperately needs assistance. On Friday, October 6th, Big Water Fish Market will be holding a fundraising dinner donating profits and collecting donations from those of you who can afford to help rebuild the Keys. On October 7th, Marathon resident Pete Castro will be flying into Marathon with supplies and our donations to distribute to the families in need.

Be Safe, Be Healthy and Eat Fish!!