May 15 marked the end of Stone Crab season for us Florida Claw junkies. But have no fear…like clockwork, October of 2016 our Stone Crab captains will be back on the water pulling and supplying us with the mouthwatering Stones to us Florida locals soon enough. Captain Emmett Lange (the Stone Crab captain that supplies the Big Water Fish Market on Siesta Key) reported an excellent season this year as the crabs were abundant and affordable. For those of us who did not stock our freezers with Stones for the off season, our crab diets will consist of Snow and King Crab from Alaska and Fresh Dungeness Crabs from Seattle on the West Coast. While it’s true that it is the end of the season for our local cold water seafood delicacies such as crabs & oysters, it is the beginning of some great fish availability from Florida and fish/shellfish from the East Coast of the United States. When one season closes another season opens. Or is that when one door opens…either way, it is what it is. 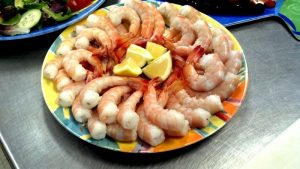 Shellfish:
Both fresh/frozen and fresh Gulf Pink Shrimp are definitely available during the summer months. Our biggest resources come from the Ft. Myers area. Shrimp boats leave Ft. Myers everyday headed south and return to the docks with fresh head on shrimp on a daily basis. The bigger companies head out deep sea fishing from the Dry Tortugas to Louisiana and Texas where they process, freeze and package the shrimp while still on the boat (which is called fresh/frozen) and it doesn’t get any fresher than that! During the summer shrimp season look for good deals on mouthwatering treats such as fresh Key West Pinks, Gulf Pinks & Browns, Shrimp from Darien, Georgia, and Fresh Royal Red Shrimp from both the Gulf and Atlantic Oceans.

Lobster:
Maine Live Lobster prices will begin to fall drastically as the East Coast waters get warmer. New Englanders boast of Lobster prices to be less than $5 a pound after the 4th of July. Considering we have overnight shipping costs to us Floridians, we should expect prices in the $9 to $12 a pound range. Still not bad. Prime Florida Spiny Lobster season starts August 6 and is plentiful through September as crowds flock to the Florida Keys to fill their mesh bags to the limit.

Gulf Oysters:
Gulf Oysters are available this time of year but I would spend a few extra bucks for imported cold water oysters such as Blue Points, PEI Oysters, Virginia or Hama Hama Oysters from Washington. Stick with local Oysters in September through April and imported Oysters May through August. 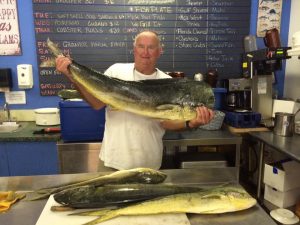 Local Fresh Fish:
The Gulf turns into a playground for charter boat captains and the recreational and commercial fisherman this time of year. As tourism sees a heavy decline in the summer months so does the charter boat business but you can’t keep these guys off the water. We see a decrease in the availability of Tripletail and Pompano because they start to migrate out of the area. The Grouper, Snapper, Wahoo, Cobia, Tuna, Blue Marlin, Atlantic Amberjack and Key West Mahi-Mahi fishing is too big of a temptation to resist for the lovers of the sea. Lucky for us, the charter boat captains with commercial fishing licenses are able to supplement their income by selling their fish which makes for a plentiful supply for us consumers. Unlike in the winter when there are more people in Florida than fish, in the summer months it’s the opposite as we have a large supply of fish and not as many people so we see the prices go way down. It’s the classic supply and demand concept.

The warmer months also bring us some fantastic options of imported fresh fish. It is definitely Wild Salmon season. Although organically farm raised Irish and/or Scottish Salmon are excellent product all year round, many of you look forward to Wild Alaskan King Salmon, Sockeye Salmon and Coho Salmon that are available this time of year. Those will all be available as well as plenty of white flaky succulent Halibut. These will all be prominent in your fish markets over the next 4 months.

Great fish available from the Massachusetts area this time of year is always Cod, Halibut, Haddock, Swordfish, Scallops, Steamer Clams and as mentioned above Live Maine Lobster. Fresh fish and shellfish are inspected and processed then shipped straight from the working docks like Gloucester, Massachusetts & Fulton Market in Brooklyn, NY. The seafood is then overnighted to fish wholesalers and markets around the world on a daily basis ensuring we have fresh and wild caught U.S. product.

My summer two cents are to buy fresh, support local, and find a fish monger you can trust such as the Big Water Fish Market.

Following is an easy shrimp recipe I like to use in the summer that I found on allrecipes.com and tweaked a bit. 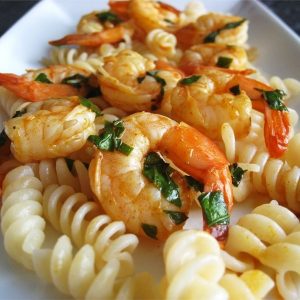 Heat some olive oil in large skillet over high heat. Add garlic. Sprinkle the red pepper flakes and paprika into the oil. Add the shrimp and toss to coat. Pour lemon juice over shrimp then sprinkle some Deli Dust to taste. Cook shrimp for approximately 3-4 minutes or until the shrimp are bright pink and the meat in the middle is no longer translucent. Reduce heat and add the basil. Toss lightly.

Serve over pasta or with a seasonal tossed salad and enjoy!

*Deli Dust is the perfect blend of salt, pepper, garlic and onion seasoning that is only available at Big Water Fish Market.

The Greatest Generation: Through the Eyes of One Veteran