Not everyone takes into consideration what it takes to put that delicious shrimp on your plate. First the shrimpers wake up at the crack of dawn, load the gear and prep their boat, rain or shine. They set out to sea (sometimes for days or weeks at a time) with a bunch of guys they may or may not even like. They drag nets, hand pick, process and separate the shrimp catch and then they ship via truck or plane all around the world. It’s a process! Next time we say grace over a seafood fest someone should thank the fishermen because shrimpin’ ain’t easy and neither is being a shrimp!

May through October is shrimp season in our Gulf waters. They come just in time for the 4th of July and summer vacations. Gulf shrimp is presently in the prime of its season.

Here is a fun fact…shrimp is the singular most popular food in the world and are a naturally renewable resource. They are an excellent source of high quality protein and are naturally low in fat, carbs, and calories and are a great source of omega- 3 fatty acids.

Both fresh and fresh/frozen Gulf shrimp are always available during the summer months. Locally our biggest resources come from Fort Myers to the Key West area. Shrimp boats leave Fort Myers every day and head south and return to the docks with fresh head-on shrimp on a daily basis. That’s where they find a Big Water Fish Market buyer patiently waiting their return as they buy fresh, off the boat on a weekly basis.

The bigger companies such as Trico Shrimp Company send their boats out deep-sea trawling from Florida to Louisiana and Texas where they process, freeze and package the shrimp while still on the boat.  This is called fresh/frozen and makes fresh shrimp available all year round. During the summer season look for good deals on mouthwatering treats of the sea such as fresh Key West pinks, Gulf pinks, browns, whites, Darien, Georgia fresh shrimp, rock shrimp, and royal reds from both the Gulf and Atlantic Florida oceans. 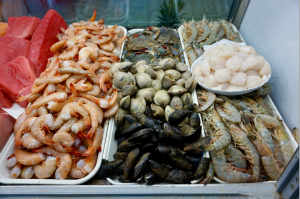 Brown Shrimp have a stronger ocean flavor due to a higher iodine content. The shells are brownish but the meat turns pink when cooked.

Royal Red Shrimp have a deep red color with more of a soft and delicate texture and a unique briny flavor. The Reds taste a lot like a crawfish, lobster and shrimp combination if you can imagine that.

Rock shrimp are my favorites and are named for their tough, rock hard shell. This shrimp is usually sold peeled and deveined so you don’t have to work past the hard lobster-like shell. The cooked meat with red skin tones has a sweet shrimp taste with a firm lobster-like texture.

It can’t be easy going through life as little as a shrimp. Trust me…as a little guy I would know! There’s still a popular sandwich named after me in Georgia called the “Scott’s a Shrimp Po’ Boy”. Press like that might give a guy a Napoleon complex and force him to drive giant trucks and such.

Anyway, growing up as a shrimp of the sea they must realize their end result is being part of the food chain. They’re either shark dinner, trapped in a trawling net by Bubba Gump’s shrimp boat, bait at the Siesta Key Marina or in a shrimp taco. No matter what the end result is, we should all give thanks for the life of a shrimp who suffers for years under a rock to end up on our dinner plate. Praise to the shrimp!