No it's not the holiday season again but tis the season for some delicious cold water fish. This is the time of year that true seafood lover’s taste buds go crazy. As the Gulf waters cool, the fish are forced to move more than normal which creates an active, leaner and tastier fish & shellfish. During the cold water months fish are higher in omega-3 fatty acids because their environment and diet promotes production of this fat as insulation. Omega 3 fatty acids we know is the good fat and have many great health benefits.

During this time of year the price of Snappers and Groupers are at the highest prices of the year but it's not the end of the world. Stay with me here…

Rumor has it that Florida’s most popular fish like Snappers and Groupers have a price increase in February and March because of all the tourism influence in our state. That is simply not true. The reason for the yearly increase is simply a matter of supply and demand. Not only are Gag/Black Groupers closed in the Atlantic until the end of March and American Red Snapper is out of season and closed to commercial fishing until June but the entire Mexican Gulf Coast is closed to all Grouper fishing this time of year. Well where do you think Mexico is getting their Grouper from? That's right….Florida. So if the only fresh Gulf Grouper available is Florida Grouper what do you think happens….yeah you got it, Grouper and Snapper prices go up.

Well, have no fear that your fish prices are on the rise because your local fishmonger has some alternative solutions and advice. Here is a list of delicious, edible and affordable fish to look for in February and March at your local Fish Market. 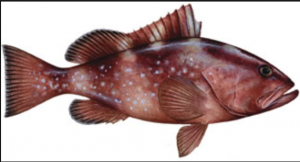 Despite what I just told you about the upcoming Grouper season Red Grouper will be plentiful and fresh. You might have to pay a $1 or so more a pound for this large, white, flaky, mild tasting Florida favorite but it will be worth it as always. My advice is not to pay more than $22 a pound and make sure you are buying from a respectable and trustworthy fish establishment to ensure you are not buying previously frozen fish. If you think about it, a pound of fresh Grouper at $22 a pound will feed 2 people. At $11 per person that is still a lot less expensive than eating out.

MANGROVE SNAPPERS:
With no American Red Snapper available, Mutton Snapper, Queen Snapper, and Mangrove Snapper are excellent substitutes and all have the same mild and sweet Snapper flavor. Mangrove Snapper can be found in schools on grass flats around bridges and near other underwater structures and are also known for their light, flaky texture.

POMPANO:
Pompano is a very popular fish this time of year. Although they yield small fillets, they have a light, moist fish taste with a very distinct, butter-like flavor with a firm and durable texture. They can often be caught right off shore / beach as they school in the surf flats.

AMBERJACK:
Just as lobsters were once considered a “poor man’s meal”, Amberjack also was once considered a “trash fish” but no more. This local fish is a large deep water fish that feeds off of shrimp and smaller fish. It is one of the more versatile fish when it comes to cooking as it holds up well on an outdoor grill, oven or is also great fried. It has a thick white flake to the meat and boasts a flavor similar to a Mahi – Mahi. I use this fish in my Gumbo and Fish tacos. 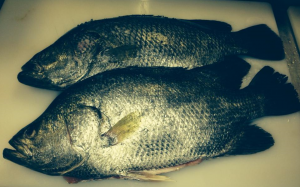 TRIPLE TAIL:
Although not as well-known as Grouper and Snapper, this fish sells out of Florida retail markets on a daily basis. It is a local fish that is often found by crab traps, channel markers and other floating objects. Because of its strict crustacean diet, this fish is sweet, white & flaky with a mild taste and a hint of crab flavor. When asked to describe this fish I say if a Snapper and a Grouper were to have a baby it would be a Triple Tail. This is one of the more expensive local fresh fish but it is well worth it and I am not alone when I say it is the best tasting fish in the Gulf. 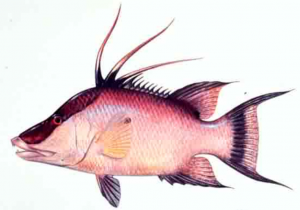 HOG FISH:
Easily the mildest fish in the Gulf and for those of you northerners looking for your Cod or Haddock, let me introduce you to the Hog Fish. It has a light Cod-like flavor but more delicate and it absorbs the ingredients you cook with like no other fish filet. It's like eating a cloud of fish flavor.

CORVINA:
Great substitute for Grouper, Snapper, or Triple Tail for about $6 a pound less. Some people like it better and the price is right.

STONE CRABS, GULF SHRIMP, CLAMS, AND OYSTERS are also in season and 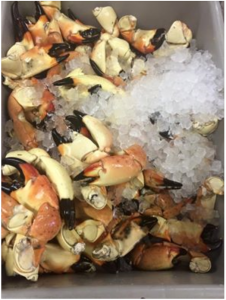 Yeah I know you could find less expensive seafood at a convenient chain grocery store but you get what you pay for. If you want previously frozen, imported and farm raised seafood you can pay less at your local chain grocery store.

Or you can treat yourself to the better fishes in life. You can find all these fresh and local treats from the sea plus much more at your Big Water Fish Market on the Southside of Siesta Key.

Sign up for our weekly e-mail to read about the fresh catches and fish market reports at www.bigwaterfishmarket.com