In Siesta Key Village, sometimes it ends up being cars vs. plants.

“My biggest amazement is sheer number of things we’ve had to replace because people just run over them,” says Mark Smith, an architect and President of the Siesta Key Village Maintenance Corp. (SKVMC), which oversees maintenance in the Village.

Recently, Wilhelm Brothers, a new contractor responsible for providing landscaping work in the Village, tackled replacing two landscape beds that required attention after cars drove into them. Those projects include the landscape beds on the north end of the Village — damaged during two car crashes — and at the “Siesta Key Village” sign at Beach Road and Ocean Boulevard — that was destroyed during a car crash on New Year’s Eve. 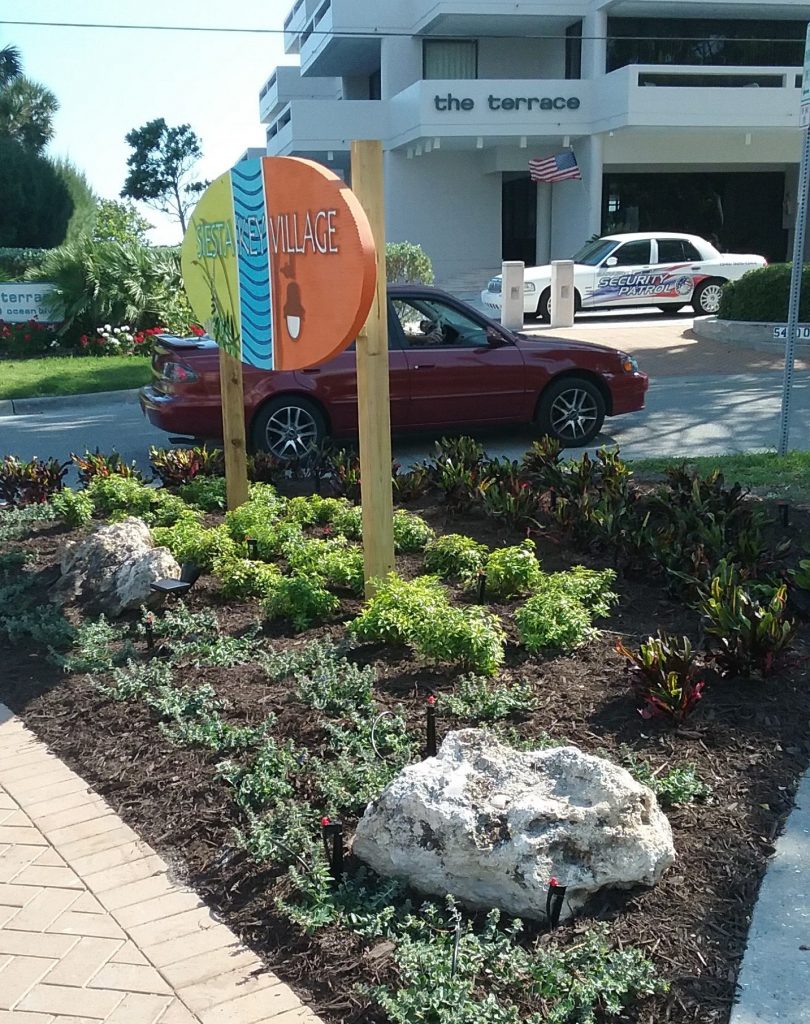 Wilhelm Brothers, Inc., the new landscaping contractor, which is based in Sarasota, has proven itself adept at not only re-doing damaged landscaping, but also addressing black mold and an attack of Aphids that had spread over some vegetation over time.

Landscaping work in the Village, as well as other aspects of maintenance in the Village, are now a big improvement over the past few years, say SKVMC and County officials, who manage how Siesta’s Public Improvement District funds are spent.

Wilhelm and a new custodial contractor, Greenscape Enterprises, doing business as Boro Building and Property Maintenance, now provide the bulk of work keeping the Village looking it’s best, and the SKVMC and county say it is a vast improvement.

As part of the Siesta Village Public Improvement District, Sarasota County assesses all the businesses in the Siesta Business Improvement District area (the assessment is part the business owners’ annual property tax bill), and utilizing the tax revenue collected in the PID, the county oversees contracts for maintenance, while the Siesta Key Maintenance Corp. (SKVMC) and the county manages the contractor operations and oversight.

“I am happy with both vendors,” says Michael Shay, the SKVMC Maintenance Manager who implements and oversees repairs and maintenance using funding from the PID.

But that wasn’t always the case.

As the commercial and entertainment epicenter of one of the country’s most visited places, Siesta Key Village is a unique place with unique challenges when it comes to upkeep and maintenance. Major improvements were completed in the Village by Sarasota County in 2008 for the existing Public Improvement District, yet only recently have the County and the PID found what they say is the right combination of contracting agreements and a maintenance approach that keeps the Village looking it’s best.

Previously, one contractor — Buccaneer Landscaping and Maintenance — provided all of the trash cleanup, landscaping, and hardscape maintenance. But that setup proved to fall short. There were several complaints about the contractor, which is based out of the area in Pinellas Park, FL, and both the county and the SKVMC, which represents business property owners in the Village, were not pleased with the level of service. As one example, that previous contractor had drilled holes in the bottom of all trash containers in the village — leading to a troubling side effect, says Shay, manager of the Siesta Key Village Maintenance Corp.

“During their time, they [the previous maintenance contractor] drilled holes in the trash liners,” Shay recalled to Siesta Sand. “They had put holes in the bottom, because they didn’t want to deal with liquid from trash forming in the bottom of the pail. We began asking why there was staining on the pavers all around the trash containers. We found out the hard way what they were doing, and the county and SKVMC held them accountable to replace all liners immediately.”

This year, however, maintenance of the Village has been divided between two companies with a more specialized approach, and so far, the county and the SKVMC say it is working.

“Really no one outfit could handle it all,” says Smith, of Smith Architects and SKVMC President.

The new contracts appear to be a big improvement so far, says Cece, the liaison between Sarasota County — which oversees the contracts with the two companies — and the Maintenance Corp Board.

“We’ve been able to economize the maintenance costs that property owners are being accessed for. This approach provides a better level of service that is much more responsive, with much more specialized services,” Cece says.

There might be room for refinement, but Cece has already seen a difference. “As a lifelong Sarasota County resident, I am proud to have a role in keeping the Village looking its best. It has changed, and I think it is going in a good direction.”

For example, Wilhelm Brothers did an excellent job with the new landscape beds. Moreover, irrigation services are now provided by Wilhelm, instead of a separate contractor taking care of that, as was previously the case. 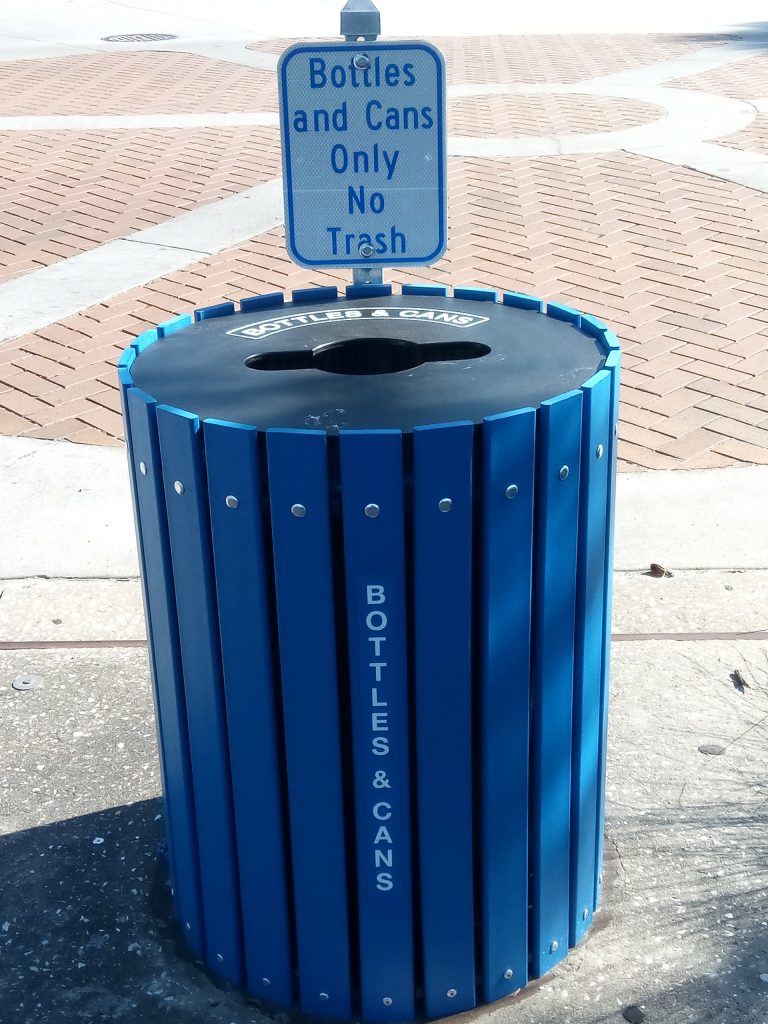 Trash upkeep in an area that has 50 trash and six recycling containers has improved, as well.

Greenscape Enterprises, the new company that now handles custodial services is obligated, through the contract, to have a wheeled cart and bring it right up to trash to avoid spillage on the pavers when emptying trash containers. The company has assigned one employee to handle the custodial services in the Village: he is thorough, takes his job seriously, and pleasantly greets people as he is going about his duties in the early morning hours, Shay notes.

It is offering recycling pickup for the first time in the Village, Shay emphasized.

The Village has pavers, and that has been another challenge when it comes to upkeep.

“The pavers themselves trying to keep them clean, was a challenge I never anticipated,” says Smith.

Gum, soda, anything you can think of — that’s what stains the pavers.

As part of the new maintenance approach, the county uses its pressure cleaning contractor, which has to adhere to strict requirements. Previously, however, Buccaneer (the former maintenance contractor for the Village) used a subcontractor.

The county, through a county-wide contract, is paying considerably less for pressure cleaning now, Cece notes, and the county’s contractor has big scrubbers and cannot use toxic chemicals. They also have to immediately dry the surface, which decreases the chances of people slipping.

In addition, now, pressure cleaning takes place after major events, the art and craft festival and Siesta Fiesta (in early spring), that take place in the spring in the Village. That’s help keep the pavers clean for a longer period of time after a cleaning.  Periodic cleaning is also possible throughout the year.

But hotelier Mike Holderness says pressure cleaning should happen more often than the county currently plans. He says stains and dirty pavers make a poor impression on guests that travel to the Key, and keeping the pavers clean should be a priority.

“There are some in the community who think should do it before major events. How about before and after those events — is that too hard to grasp,” Holderness tells Siesta Sand.

In addition, Holderness, owner of Siesta Beach Resort, Siesta Key Beachside Villas, and Beachside Management, which alone manages over 100 properties, would like to see a big picture plan for daily and long-term maintenance goals in the Village — something he says is lacking now.

Although Holderness believes a lot more can be done to keep the Village pristine, the county and SKVMC new approach has scored some points with the critic. Holderness believes the employee for Greenscapes, who handles trash pickup, typically five days a week, is doing an excellent job. But Holderness thinks the level of service can go one step further.

“He is really nice and always smiling,” Holderness says. “But I could see him [and other maintenance employees] come down with a super nice cart — with Chamber of Commerce visitor fliers — that doesn’t look like a garbage cart. He can tell people what there is to do. Maybe if there is red tide, he can say Mote Marine is having this event. He can be promoting different reasons for a family or couple to stay and to come back.”

Sura Kochman is one of many fearless opponents of Siesta Promenade