The new style at the Siesta Key Beach Resort can be described as coastal modern with a Caribbean twist. Expansive pool will be surrounded by palms. 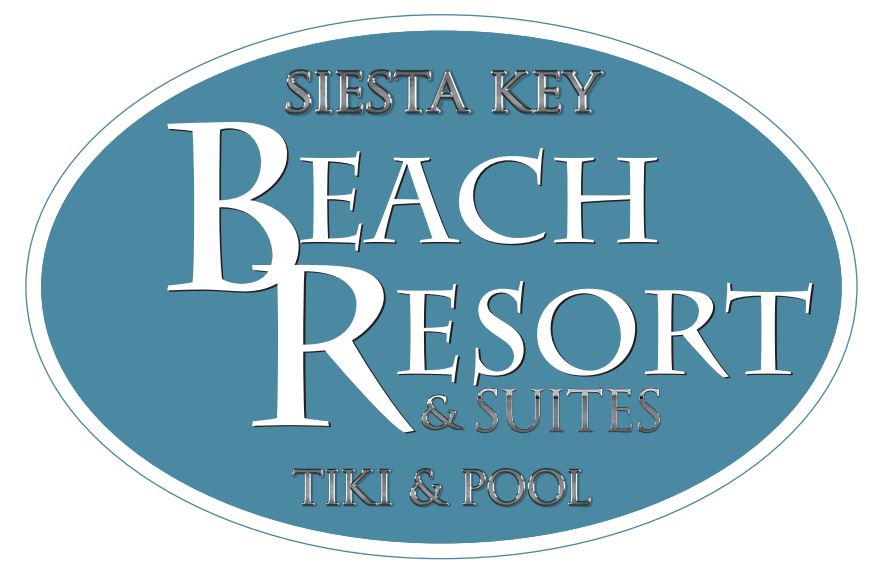 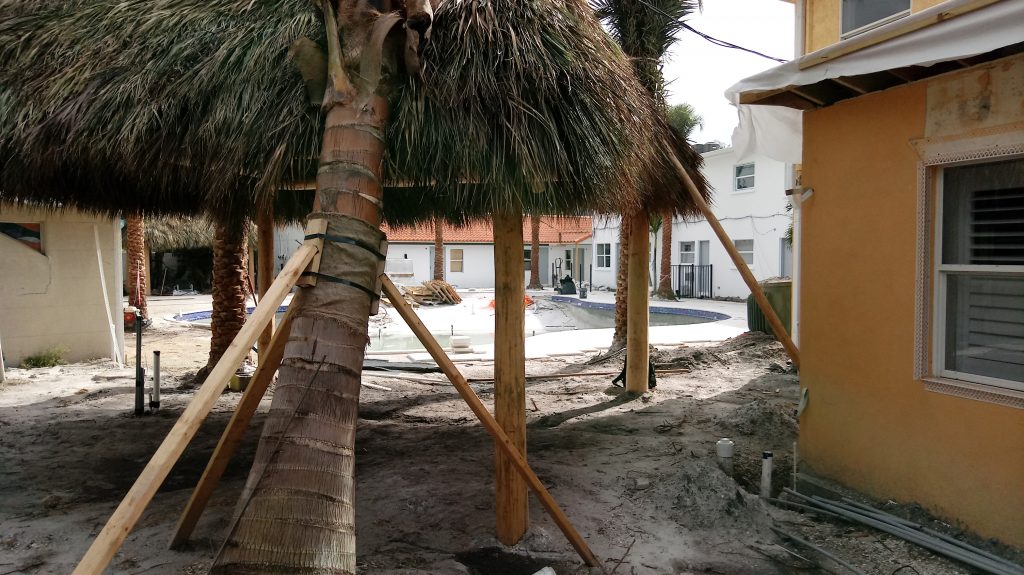 The nearly 60-room resort was already turning heads as major construction work wrapped up the week before Christmas. What had been a conglomerate of mid-century, and deteriorating buildings, is now an updated resort — all painted clean white with cypress soffits — centered around a brand-new, resort style pool-and-spa oasis. The biggest addition besides the new pool: the large chickee hut visible from Ocean Boulevard.

“I’m getting a lot of calls,” [from local business owners] says Mike Holderness, who purchased the resort back in May, 2017. “People are driving by and saying what’s going on!”

Once people go on the property to see the pool area, “they are blown away,” he adds.

The giant chickee hut — at just under 30 feet tall — was built with Everglades cypress, by Seminole Indians, and is attached to the main building fronting Ocean Boulevard. It will cover picnic tables and a patron area where guests will be able to pick-up complimentary environmentally-safe water, bicycles, beach towels, masks and snorkels. And it will be the perfect gloomy-day hang out, Holderness says.

All five buildings on the property underwent exterior renovations with some interior updates, and handicap-accessible pathways and ADA pool-area bathrooms were constructed. In addition, the entire property was re-landscaped. Royal palms, Sylvester palms, and coconut trees were planted. “We wanted there to be shade everywhere you walked,” Holderness says. Eco-friendly turf grass replaced a strip of broken asphalt. Low-water use, native landscaping was incorporated throughout the property. 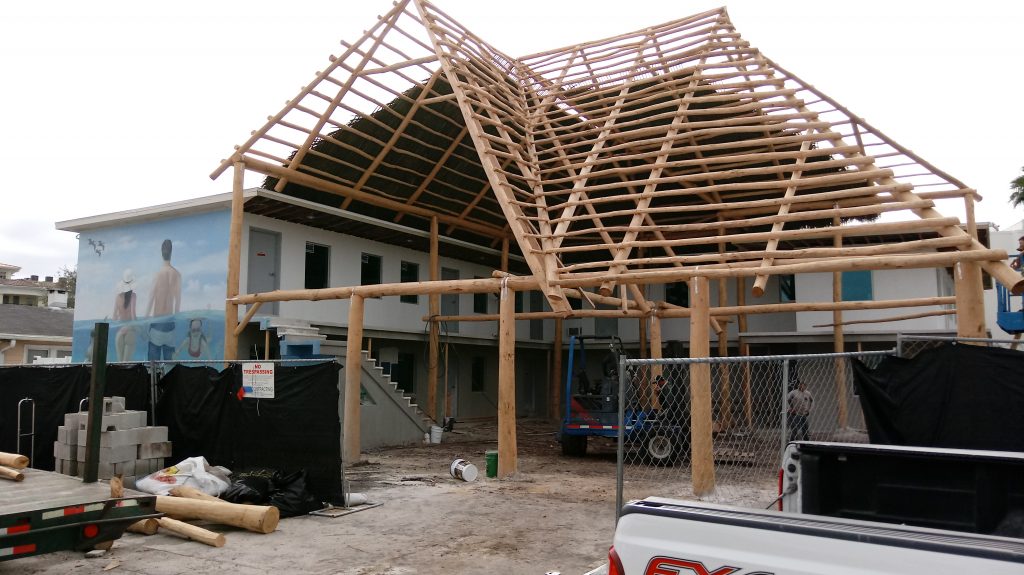 The mood around the property was enthusiastic.

“I’m so excited,” Holderness, who had been oversees major aspects of the renovation and working 18 hour days to get the project completed, told Siesta Sand during an interview at the end of December.

Resort staff, including the housekeeping crew, were also busy at work, along with various contractors. “We’ve had up to 50 people here a day working on the renovation,” Holderness says.

The resulting project brings “new life” into the aging resort. “We’re bringing back the vibe of yesterday for future families and couples to enjoy,” says Holderness, who runs Beachside Management, a rapidly growing management company based on Siesta Key. The company’s holdings include Siesta Key Beachside Villas, which Holderness renovated.

From the beginning, the vision for the renovation project aimed to refine the resort, built in 1955, into world-class accommodations — catering to families and couples.

Along the way, however, some of the specific design plans had to be modified, due to two factors. The first factor was a combined complex county permitting process and strict FEMA renovation rules that limit the amount of structural work that could be completed on coastal properties.

Secondly, this summer, just before renovation work began, the then-lingering red tide bloom off the coast slowed bookings at the resort.

Business was so slow that Holderness faced a difficult choice. He closed the resort, and in order to continue to pay his staff, went forward with the scaled-back project.

Overall, while the project was scaled back in some aspects, other areas received more attention. For example, a planned in-house kitchen and new balconies were scraped from the plans, for now. But Holderness and investors built a brand new pool with beach-style, family-friendly 35-foot long beach entry — instead of simply re-surfacing that old rectangular pool as they originally planned. “The amazing pool and tiki is a hedge against windy beach days,” Holderness says. “And the new pool makes it more family friendly, easier on elderly and I’m proud it’s now ADA friendly.”

Scaling back the plans had another benefit. The changes allowed Holderness to keep his staff working.

“Instead of letting staff go, we scaled back some of the work,” Holderness says.

Although it might have cost less to hire a commercial painter, Holderness found one unexpected result was that the collaboration began to instill in his staff a proud sense of ownership in the new resort — even before it even opened. “They are nothing short of inspiring,” Holderness says.

Even though structures on the property are close to the end of economic life, constructing a brand new building(s) was not economically feasible at the time, Holderness says, since that would have decreased the number of units down to 37, under the county’s current zoning code — although oddly the code (written in the 1970s) would allow up to 10 beds per resort unit.

But Holderness says the renovation project brings the resort to the quality that will attract families, and future improvements are possible. Mike’s family is deeply rooted in the area, and he says a love of SRQ is something instilled in him by his parents.  “It’s important for me to do my community proud,” he says.

“We want guests who will stay here and go into the Village and eat at restaurants and contribute to the local economy,” he says.

Holderness hopes guests will enjoy their stay so much that they book a vacation at the resort for the following year.

The resort, once known as a spring break haven, will be family-friendly, tropical, and unique. “The target market is families and couples of all ages,” Holderness says. 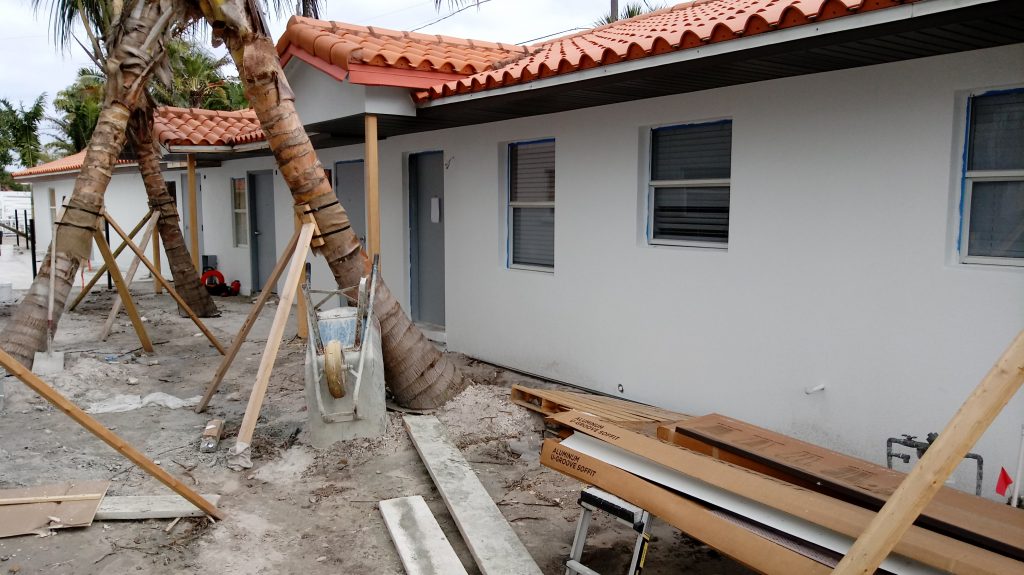 From the courtyard under the chickee, guests will be able to pick-up complimentary environmentally-safe water, bicycles, beach towels, masks and snorkels, and find complimentary paddleboards, kayaks and Hobie Cats on the beach. Guests will be given bracelets, so staff will be able to identify who is a guest before giving them items for use. On a gloomy day, guests can hang out under the chickee or sit poolside in the large 12-person hot tub.

The pool has three heaters. And pool-side guests will be able to pick up towels and water.

Holderness also envisions the possibility of small wedding events at the large chickee. “But we want to be a good neighbor,” he says. “We won’t have any amplified sound here” at the resort.

November Siesta Key Round Up