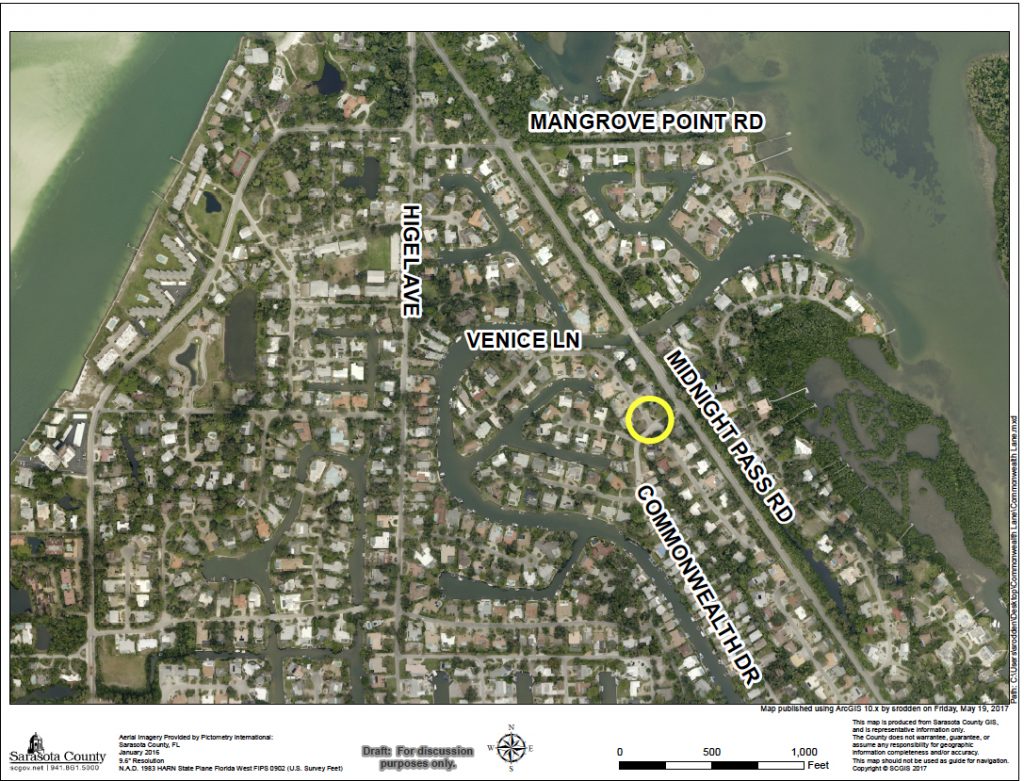 For months, residents of the affected Siesta Key neighborhood have been divided in their opinions about whether multi-way stop signs should be installed on Commonwealth Drive at the Venice Lane intersection.

However, responding to the urging of most of the people who addressed the issue during the County Commission’s Feb. 27 meeting, the board voted 4-0 to approve the signs. (Commissioner Alan Maio was absent; he was representing the commission at a board meeting of the Southwest Florida Water Management District.)

The residents who called for the board’s action cited safety as their primary concern.

Two residents, especially, talked of their worries about drivers striking children who live in the neighborhood and have to walk between their homes and Midnight Pass Road because they take a bus to school.

“I would like a stop sign [at the intersection of Commonwealth and Venice],” said Beverly Chenoweth, who lives on Commonwealth Place. “I’ve seen [vehicles] come around that corner fast.”

Mario Christaldi, who lives on Venice Lane, also pointed out that many people walk their dogs through the neighborhood, while others regularly jog along the roads. “It’s just a hazard,” he said of the intersection.

County staff stated that the signs would be erected by the middle of March.

Commissioner Charles Hines took the opportunity of the Feb. 27 discussion to rebuke the county’s Engineering and Operations Division manager for not having made a change in the criteria staff uses to decide whether stop signs are warranted on a street. 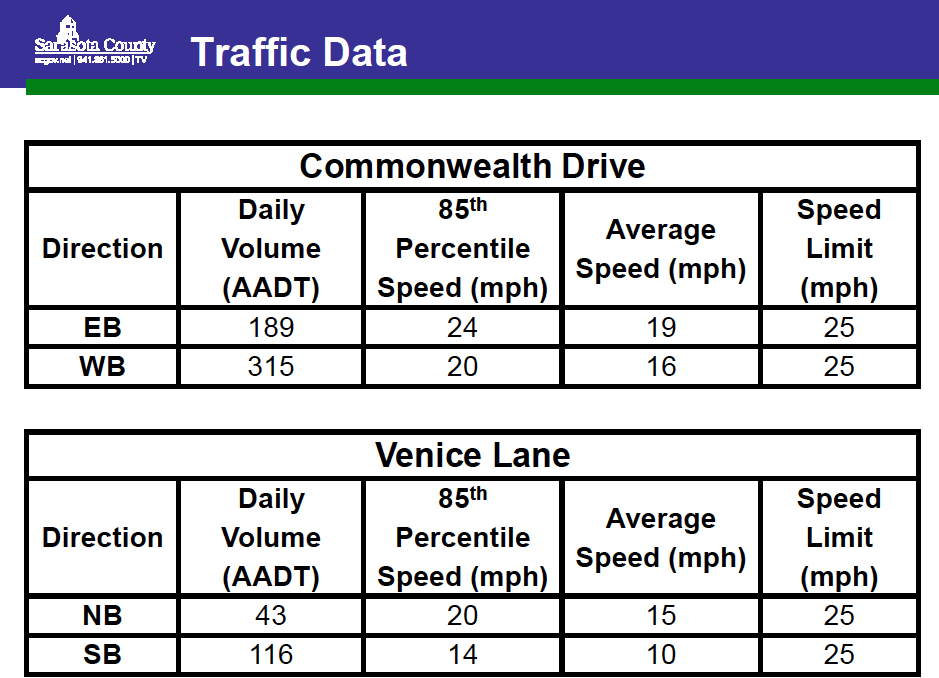 Robert Fakhri told the commissioners that staff did not recommend installation of the stop signs, because the situation did not garner enough points in a system staff uses to make that type of determination. Nonetheless, the county’s Traffic Advisory Committee (TAC) had voted to recommend approval of the petition for the signs, Fakhri said.

Mario Christaldi, one of the speakers who addressed the board on Feb. 27, noted that two of the law enforcement officers on the TAC were among the 3-1 majority.

“It’s very rare that the [TAC] goes against something that’s so skewed in the criteria,” Hines told Fakhri after the public comments concluded. Sometimes the County Commission also has voted contrary to the staff recommendation, Hines added. The last time it did so, he continued, the commissioners agreed that the petition affected what Hines characterized as an “internal neighborhood.”

“Have you not added [that type of situation] into the criteria yet?” Hines asked Fakhri, referring to the point system Fakhri had mentioned earlier. “I thought this board voted to add … to the criteria” an extra point when an issue involved just a street within a neighborhood.

It would be difficult for staff to define that type of neighborhood, Fakhri said.

Hines stressed that the County Commission already had directed staff to make such a change. Still, he acknowledged, “I understand what you’re saying, in that every neighborhood is different.”

“We’re working on it,” Fakhri replied, noting that staff would have to prepare a resolution for the board to approve the change in the criteria.

“I didn’t know it was that complicated,” Hines retorted.

“I think we’d like to see it not that complicated, done a little quicker,” Chair Detert told Fakhri.

After the vote, Hines addressed County Administrator Jonathan Lewis: “I think staff has had adequate time to add that extra language to the criteria.” He asked Lewis to find out when the matter would come back to the commission for a vote, referencing the resolution Fakhri had mentioned.

Hines said he did not want to have to face a situation in which “someone gets killed and we had an easy opportunity to fix [the situation beforehand].”

During his presentation, Fakhri explained that Venice Lane is “just about a north/south roadway,” while Commonwealth Drive intersects Midnight Pass Road at a 90-degree angle. Commonwealth has no sidewalks or bike lanes, he continued. Its lanes are 11 feet wide, and the speed limit is 25 mph.

Noting the county’s criteria for erecting multi-way stop signs, Fakhri told the commissioners that the points need to add up to at least 7; in this case, the total was 3.

When Hines asked why the TAC voted to recommend the stop signs, Fakhri replied that the three residents who spoke during the TAC’s June 12, 2017 meeting all urged approval of the signs. Additionally, Fakhri explained, Sgt. Darrell Seckendorf, who represents the Sarasota County Sheriff’s Office on the TAC, offered his support of the petition.

(The TAC minutes of that meeting say, “Seckendorf noted that he patrols this neighborhood and he thinks the stop signs would help with the sight distance issue at this intersection. Chairman [Morgan] Skoegard asked Sergeant Seckendorf if he thinks increased enforcement would help. Sergeant Seckendorf responded that he thinks enforcement would come if the stop signs get approved to go in. He noted that large vehicles coming around this corner, at 25 mph, can pose an issue for those who cannot move out of the way quickly.”)

The TAC members, Fakhri told Hines, felt that given the close community on Commonwealth Drive and Venice Lane, “What’s the harm [of erecting the signs]?”

However, Fakhri explained on Feb. 27, a few months ago, after staff originally advertised the stop-sign issue as a County Commission consent agenda item, staff received nine emails opposing the installation of the signs.

The consent agendas include routine business items that typically have not generated controversy or concerns from the public.

New Book Celebrates a Century of Tourism on Siesta Key