Season of excesses, or perhaps excuses

By Paul Roat
“I was misinformed.”

Those three words have been used to cover a flood of misdoings over the years. The phrase is also the recent catch-all for a flood of problems that are washing over property owners in Southwest Florida.

Congress approved sweeping changes to flood insurance regulations and premiums last year. Those rate changes target mostly older, non-elevated homes in flood zones. You can still get flood insurance, but in some instances at an eight-fold rate hike.

It has been reported that one Manasota Key homeowner saw his annual flood insurance premium go from $2,000 to nearly $17,000.
Congress is now trying to correct the problem, but it is uncertain just when or if the make-good legislation will take effect for the estimated 30,000 homeowners impacted in Sarasota and Manatee counties.

The mind boggles at the wrongness of that “solution.” It’s enough to drive one to drink.

… and on that alcohol note: a local vineyard
Rosa Fiorelli Winery and Vineyard proves that Florida can indeed produce a grape suitable for a fine wine.

The Manatee County vineyard has been in operation since 1998. It now offers tours of its 10 acres of vines and the fruit of those vines through public tastings.

The grapes are Southern muscadine, a variety that seems to thrive on Florida’s sandy soil and humid environment.
Fiorelli Winery and Vineyard is offering a special holiday dinner party from 5 to 9 p.m. December 14. Tickets are $140 per couple and include a feast plus an open wine bar and music, all at an open-air pavilion.

The vineyard is in eastern Manatee County, 4250 County Road 675. Further information is available at fiorelliwinery.com, or by calling 941-322-0976.

‘You come too much. Go home now. Don’t come back.’
Manatee County tourism officials have been touting the laidback, old-Florida charm of Anna Maria Island in their promotional efforts for decades.

Come see the real Sunshine State. No condominiums. Authentic Florida.
And the people came, visited the restaurants, shopped, went to the beach, and had a helluva good time. Too good a time, some residents have complained.

Prisoners in their own homes. Blocked in by “daytripper” vehicles, who trash their property, trample across their private land, play music too loud, and fill the island with people behaving poorly, residents claim.

One longtime resident even watched day visitors borrow a ladder from his carport to pick mangoes from his tree.

So the residents have protested to tourism officials to cease and desist with all the pro-Anna Maria Island promotions in an effort to maintain the peace and quiet they paid for when they moved there.

There is even talk about establishing non-resident tolls on the roads to Anna Maria.

Call it too much of a good thing.

Portions too big on St. Armands? 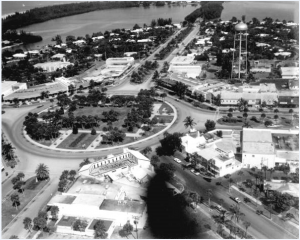 St. Armands Circle has been a shopping and dining destination pretty much forever. Residents and visitors would go to the circle, stroll through the specialty shops day and night, grab a bite or beverage, and a good time was had by all.

There is now some discussion about people having too much of a good time, eating-wise.

Some have said that more than 55 percent of retail space on the Circle is used by food-related businesses. Apparently, that large a number is bad for business.

How much is too much?

Trips to St. Armands Circle generally involve a meal. Is the place where you have the meal the destination, with shops being included, or is shopping the destination with a meal an add-on to the event?

I have found that window shopping always includes a visit to surrounding eateries if for no other reason than to check out the menus. Restaurant shopping usually leads to another visit to another restaurant, more shopping, a different restaurant, and so on.

Too much of a good thing? Perhaps that philosophy is not valid in this case.