Altogether, it took only seven-and-a-half minutes on June 13 for the Sarasota County Commission to unanimously approve the implementation of a new zoning district and then agree to allow the owners of property on Stickney Point Road to make use of that district to rehabilitate the Siesta Key Palms Hotel.

During the public hearing, Chair Nancy Detert asked a few questions about the zoning district, which has been crafted to allow the redevelopment of older hotels and motels. One member of the public also had a question, though it related to traffic patterns.

Detert was absent because of illness when her colleagues heard a staff report during their first public hearing on the proposed new district. Held on May 22, the hearing also focused on developer Henry Rodriguez’s plans to preserve what he called the “chic, mid-century experience” for his guests at his 14-unit hotel.

Robert “Bo” Medred, president of Genesis Planning & Development in Bradenton — who has worked on the project on behalf of Rodriguez — explained to Detert on June 13 that Rodriguez’s approximately 1-acre site is split into two zoning districts: Office, Professional and Institutional (OPI), and Residential Multi-Family 4. The latter allows up to 18 units per acre.

Neither would allow Rodriguez to redevelop the property as he desired, Medred continued, and Rodriguez did not want to apply to have the parcel rezoned to a commercial designation.

After talking at length with county staff, Medred explained, the decision was made to propose a new zoning district: Boutique Resort Redevelopment/Planned Development — BRR/PD.

“It was to account for those [transient accommodations] properties that were ripe for redevelopment” but whose zoning would hinder the transformation, Medred added. Because of setback, buffer and other requirements implemented in their zoning districts since their construction, he explained, they have ended up being nonconforming properties.

Only about eight or nine hotels or motels in the entire county would qualify for the BRR/PD designation, he said. If any of the other owners wished to redevelop those properties, he continued, they also would have to request County Commission approval.

On May 22 — during the first public hearing on the proposed new zoning district — Medred also explained that the BRR/PD district could not be used on the county’s barrier islands. The maximum height of buildings would be 35 feet, he noted, and the maximum number of rooms allowed would be 75.

Furthermore, an applicant would have to demonstrate that the redevelopment would be compatible with neighboring land uses before gaining County Commission approval for the rezoning, Medred told Detert on June 13.

“You probably won me on that,” she responded.

Referring to Rodriguez’s proposal for further changes to the Siesta Key Palms Hotel property, Detert added, “It’s not out of the box; it’s not crazy; it’s compatible.” Her concern, she said, had been focused on the proposal for the new zoning district.

Other facets of the proposal

During his May 22 presentation, county Planner Kirk Crane explained that the Siesta Key Palms Hotel has six multi-family units and eight hotel/motel units, Crane continued. The southern boundary of the property is Dawn Street, he noted, while other access points are on Avenue B. 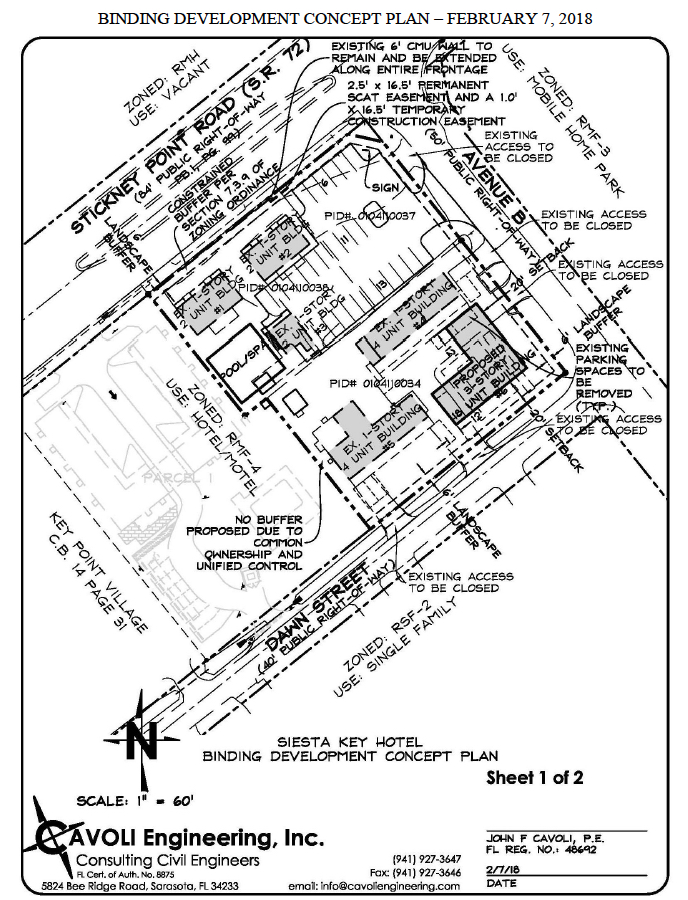 Rodriguez wants to build one new 18-unit, three-story structure, Crane told the board, but it would not exceed 35 feet. After that has been completed, he said, Rodriguez plans to remove one of the two multi-family structures on the property and put in a new spa and pool. The site plan also calls for 30 parking spaces, along with a total of 30 units.

Furthermore, Crane said, Rodriguez plans to eliminate the current five access points and create a new entrance from Avenue B.

After Crane concluded his remarks, Rodriguez addressed the commissioners, telling them that he and his wife bought the hotel property in 2016. The travel industry nationwide has put a focus on rehabilitating older properties, he pointed out.

On The Today Show the previous week, he continued, the editor of Travel + Leisure magazine was talking about destinations and mentioned Sarasota. The only hotel she discussed was his, he added. “I had nothing to do with this,” he added laughingly. “So we’re actually full this weekend.”

The Siesta Key Palms Hotel also has held the No. 1 or No. 2 spot among 52 Sarasota accommodations on TripAdvisor, he pointed out. “It consistently ranks above the [Ritz-Carlton in downtown Sarasota].”

Public and board support

During the May 22 public hearing, three adjacent property owners endorsed Rodriguez’s plans for the hotel.

“Mr. Rodriguez has just been a godsend,” Bernadette Tirpsira told the commissioners. “His existing vacationers are polite and quiet,” she added. “He has stopped noisy parties, constant flow of traffic in and out at all hours and, especially, rat infestation.”

Margot Linn said that before Rodriguez bought the property, it was the scene of prostitution and drug dealing. “Almost everybody I know is in favor of [his] project.”

After the public hearing, Commissioner Charles Hines made the motions to approve both the creation of the new zoning district and to approve the rezoning of Rodriguez’s property to that district.

Commissioner Alan Maio seconded it. The motion passed 4-0, with Commissioner Michael Moran absent because of a death in the family.

On May 22, Maio referenced the speakers’ approbation for Rodriguez’s plans, including Tirpsira’s comment that Rodriguez has been a “godsend” to the neighborhood. “Nothing else needs to be said,” Maio said.

“I’ve just never seen, to-date, such a rehab” as Rodriguez already has achieved on the site, Moran added that day. He characterized the hotel atmosphere as “that Old Florida feel,” noting that he and his wife had toured the property.

“I think the lesson here is that the scale is completely appropriate for this area,” Commissioner Paul Caragiulo pointed out.