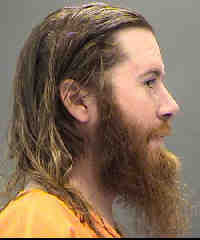 It took a bit of time, but this reporter finally found the citation for the driver who, on Jan. 9, allegedly ran over the north landscaping median on the approach to Siesta Village.

The Sheriff’s Office charged Andrew H. Butherus, 33, of 5538 Rollingwood Drive, Sarasota, with Driving Under the Influence in connection with the incident, which was reported at 12:45 a.m. on Jan. 9. The location listed was 4708 Ocean Blvd.

In his arrest report, Butherus’ occupation was listed as “Poker Dealer,” but the Sheriff’s Office citation said he was unemployed.

He was released from jail on a $500 cash bond, the report added.

The incident report said the responding deputy found Butherus sitting in his 2006 Toyota Tacoma on the side of the road, with his hands on the steering wheel and the engine still running.

The deputy added that he “was able to detect the odor of the impurities of an alcoholic beverage coming from the defendant and from inside of the vehicle. The defendant had glassy, bloodshot, watery eyes,” the report continued, and the deputy saw an open bottle of whiskey on the front passenger floorboard.

The deputy further noted that he already was familiar with Butherus, because the deputy had spoken with him about 30 minutes before the incident occurred.

At the jail, the report noted, Butherus also refused to take a breath test and a urine test to detect the level of alcohol in his blood.

The vehicle had damage on the front and purple flowers were dangling from the passenger side fender, the report said. “The front passenger tire was also flat.”

A witness told the deputy that the witness saw the defendant “driving up the center of Ocean Blvd., through a flower bed, striking a road sign. This event occurred approximately [one-quarter] mile from where [the deputy] located the defendant on the side of the road,” the report continued.

A towing report regarding the vehicle, filed in the 12th Judicial Circuit Court, reported that among the contents found in the Toyota were an acoustic guitar, a harmonica, a sleeping bag and “totes full of clothes,” along with “miscellaneous garbage, and miscellaneous paperwork.” 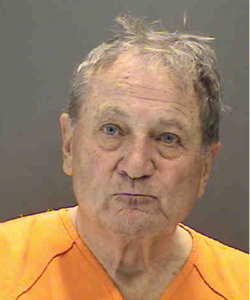 The Sarasota County Sheriff’s Office arrested a 76-year-old Sarasota man on Feb. 1 after he allegedly threatened a woman driver with a weapon on Stickney Point Road.

The incident allegedly occurred at the U.S. 41 intersection, the office reported.

Harry A. Shuback Jr. of  Whitemarsh Ave. was charged with Aggravated Assault with a Deadly Weapon and DUI, the Sheriff’s Office said, adding that a breath test revealed Shuback’s level of intoxication was close to twice the legal limit. Shuback was released from jail on Feb. 2 under a $25,000 bond, the information was obtained from the Sheriff’s Office’s Corrections Division.

According to the report, Kimberly Brewer of Bradenton was in the center lane, headed westbound on Clark Road in Sarasota, when she moved over to the left lane “directly in front of Harry Shuback Jr.’s vehicle.” She told deputies that Shuback “beeped his horn and presented her with his middle finger after she changed lanes.”

Then, about 1 p.m., as they approached the traffic light at Stickney Point Road and U.S. 41, she entered the left-most left turn lane and Shuback moved into the other left turn lane; he was one car length back from her vehicle, the report continues. Shuback exited his vehicle and approached the passenger side of Brewer’s vehicle “with a silver gun in his right hand,” the report says. He allegedly pointed the gun at Brewer, the report adds, and “tapped on the window with the end of the gun.” Brewer told officers that Shuback “yelled at her,” telling her, “‘Hey, girl, you better think again before you do something like that’” and then walked back to his vehicle, the report says.

“Brewer stated that she was in fear for her life and thought that she was going to be shot and killed by Shuback,” the report points out.

A deputy who spotted Shuback’s vehicle at the intersection of Stoneybrook Boulevard and Central Sarasota Parkway stopped Shuback and arrested him just before 3 p.m. on Feb. 1, the report says. He advised the deputy that he had a gun in his vehicle, the report notes; the deputy retrieved a 9mm Sig Sauer handgun “that was fully loaded with one round in the chamber,” the report adds.

A witness to the Stickney Point Road incident told deputies that she was directly behind Shuback’s vehicle at the U.S. 41 intersection, “and she saw him get out of his vehicle with a gun and pointed it at Brewer,” the report says. She provided photos of the incident that showed Shuback standing at Brewer’s passenger side window while Brewer was waiting for the light to change, the report adds.

After the deputy stopped Shuback, the report notes, the deputy “noticed the odor of an alcoholic beverage coming from [Shuback’s] breath. … The defendant appeared to have sluggish speech at times and had bloodshot watery eyes.”

Shuback “demanded he be given a breath test as he advised he was not impaired,” the report continues. The two breath test results conducted on Shuback showed his alcohol level at 0.128 and 0.125, the report says. The legal limit is 0.8. 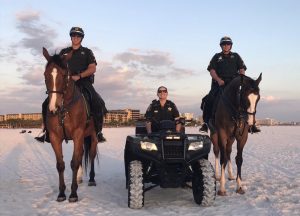 During the Feb. 1 Siesta Key Association (SKA) meeting, Sgt. Jason Mruczek, leader of the Sheriff’s Office substation on the Key, told the approximately 65 people present, “We’re getting ready for spring break on our end; I don’t know about yours.”

One initiative the office has been working on for this year, he pointed out, is a “Park Smart” information card, which officers will distribute to condominium complexes that traditionally see a lot of activity during the spring break period. The cards will advise visitors, for example, that glass is forbidden on the beach and ask them not to litter. The cards also will note that it is illegal for anyone under the age of 21 to consume alcoholic beverages, “which is obvious,” Mruczek said, “but people forget.”

Additionally, he continued, the cards will remind people not to leave valuables visible in their cars and to lock the doors of their vehicles and accommodation. Well more than half of the burglaries of vehicles and residences occur in situations when people have not used their locks, Mruczek pointed out.

The Sheriff’s Office spring break operation officially will begin on March 1, he noted. The Mounted Patrol will assist deputies on the Key, more officers will patrol the beach on ATVs, and extra Traffic Unit vehicles will be on the island at night, he added, to deal with the “big influx of people.”

In response to a question from SKA member Dave Patton, Mruczek said the Mounted Patrol officers probably will show up during the first week of March and continue to assist on the Key through mid-April, “maybe longer.”

Mruczek added, “They’ll be at the beach if anyone wants to say, ‘Hi,’ to the horses; they’re very popular.”

Speaking of the Sheriff’s Office …

During the Jan. 23 Condo Council meeting, Sgt. Mruczek provided the attendees a copy of the Key crime statistics for 2017.

Most types of crime recorded were down in comparison to the 2016 statistics, he noted. For example the number of residential burglaries dropped from 33 in 2016 to 26 in 2017. However, Mruczek pointed out, vehicle burglaries were up from 48 in 2016 to 58 in 2017. The primary reason, he said, was that a young Sarasota woman allegedly was targeting unlocked vehicles on the island during the summer.

Sarah Ann Young, who was 20 at the time of her arrest in September 2017, ultimately was charged with six counts of Burglary of a Conveyance. She was charged in connection with incidents on Higel Avenue, Siesta Cove Drive and Island Circle. Detectives reported that they were able to identify her from video surveillance provided by the owner of a residence near the house where one burglary occurred, the Sheriff’s Office reported.

In November 2017, Young pleaded nolo contendere to six counts of burglary of an unoccupied structure, which is a third-degree felony, court records show, and two counts of fraudulent use of personal identification information. In regard to the later cases: Detectives found evidence that she had used allegedly stolen credit cards to order a variety of goods on the internet.

A corrected Order of Probation, filed with the 12th Judicial Circuit Court on Jan. 4, says Young was placed on probation for five years and ordered to remain at her residence between 10 p.m. and 6 a.m. She also was ordered to pay court costs and fines totaling $2,237. (An attorney with the Public Defender’s Office represented Young.)

Additionally, Judge Charles E. Roberts ordered that Young undergo a drug evaluation and, if deemed necessary, to “complete the treatment,” the document noted.

On Dec. 15, 2017, an officer had found she was not complying with the curfew, because she was neither at home nor at work, a court document says. As a result, she was placed under arrest on Dec. 29, 2017, another document says. She admitted to that violation of probation on Jan. 31, court records show, and she was ordered to serve 90 days of community control before being allowed to return to the original terms of probation. She also was ordered to pay $100 in court costs.

Mruczek’s statistics for the beach park were listed under the heading, “At 948 Beach Rd,” prompting one woman in the audience to ask where that location is.

And speaking of the beach parking lot …

Deputies were called to 948 Beach Road about 6 p.m. after witnesses reported seeing a man with a black-and-white backpack pulling on car door handles in the parking lot at the beach, a news release said. After deputies arrived on the scene, the release continued, they quickly located Devon Knight, 27, of 2538 Rose St., who fit the description witnesses had provided them, the release added.

While they were speaking with Knight, the deputies received a report of a vehicle burglary at the same location, the release noted. The victim, a 49-year-old Connecticut resident who had been on the beach, reported several items had been taken from his car, including an iPhone charger, a Samsung tablet and a black iPhone 5S, the release added. Deputies valued those items at approximately $400, the report noted.

Knight agreed to a search of his backpack, where deputies recovered all three items, the release said.

Knight was arrested and taken to the Sarasota County Jail, the release added. He was charged with a single count of Burglary of an Unoccupied Conveyance and was ordered held on a $1,500 bond, the release noted.

On Feb. 8, Corrections Division records say, Knight was released on bond of $1,000. His arraignment was set for March 9.