Hunting Season opens in January
No, all the bears on Longboat Key were shot many years ago and no Key Deer have been seen in living memory. And of course we know it would be so politically incorrect to go open season on the Manatees that we won’t even think of going there. So yes, it is time to go after those pesky, persnickety, persistently pernicious peafowl, the peacocks. Yes, it is time for them to go. Of course, that is what they said back in 2009, the last time they brought out the big artillery. This time around they probably will use Nuisance Wildlife Removal, the same company they used back then. 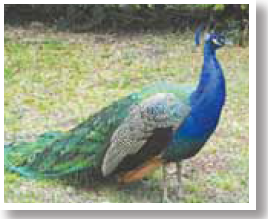 The plan is to liberally feed the peacocks during the holiday season (you might have had turkey or goose for Christmas dinner and, if you didn’t have it this year, you’ve missed your chance to have roast peacock. When the new year starts (and the birds are suitable hungover) they will start closing the gates on the feeding areas and, voilà, all the peacocks and peafowl will be trapped. Well, not quite every one. First of all, they are going to leave 12 colorful peacocks, in all their male splendor, to placate the tourists. Secondly, they don’t actually expect to catch every single bird during the beginning phase of Operation Gotcha. The setup and first 10 caught will set LBK back about $2,000. After that it will be $150 per head – don’t worry, the living, breathing body, wings and feet will still be attached. If the trappers can’t catch all of the fowl by simply leaving kernels of corn on the ground they will be getting about $275 each to taser them out of the trees.

Somehow, back in 2013, a clairvoyant peacock, peahen and two young ones got wind of the coming onslaught and migrated to the Indian Shores section of Sarasota, just across the bay. Lacking any tight immigration policy, the neighborhood welcomed these strange birds with open wings, and the settlement has since prospered. But at $275 per beak, the trappers, or some wily sub-contractors, might try to do a snatch and grab to take them, and their descendants, back across the bay. But what we all need to do is mark January 1st, 2021 on our calendars, and in 2021 google – Peacocks Longboat Key – to see how many are there five years from now.

Just one shade of Red at Christmas
No, not the controversial Starbucks holiday red latte cup, but the shade of red  associated with Red Tide. It came to LBK canals and its effects stay on as the algae bloom has been floating silently up and down our gulf coast for quite some time now. The problem is that while the bloom floats away, the dead fish don’t. They tend to linger until they are scooped up and taken to a Bradenton landfill. The Snowbirds love this extended hot weather but the side effect is the red tide. Hopefully our traditional cold snaps will break the heat long enough to sink the algae – at least until next summer.

In my – but not in my – backyard
The beach along Longboat Key is being re-nourished. Again. To the tune of about $11 million. Not wanting to spoil the Snowbird Season, the spreading of the sand will start later this year, in April. This time the sand is not being brought in by tube from further out in the gulf or by barge from further along the coast, but by truck from a site of good sand somewhat inland. As with all such projects most people want it to be at the lowest cost and done as quickly as possible. Just not going to happen,

Among other places, the sand is going to be placed in front of the Bay Isles Beach Club. Hooray, say the members of the Bay Isles Beach Club, including Fairway Bay resident Peter Kasden and Bay Isles resident Madelyn Spoll. Longboat Key Town Manager Dave Bullock asked the Bay Isles Beach Club membership if the dump trucks could enter through their club entrance to dump sand in front of their club and the members said NO. LBK officials mentioned that in doing so they knew they would have to tear up the road and remove some bushes, but would re-landscape the area and put in a brand new road to replace the old one. The reason for doing so was to save entering the beach further to the south and having to transfer the sand from the big trucks to smaller ones and then ferrying it along the beach. Using the club entrance would save the double handling of 200,000 cubic yards of sand. “….no…..no one wants this”, said Peter Kasden, who did want the sand.  “If they go” another way “our pavilion, bathrooms and barbecues can still be used” by our members, said Madelyn Spoil (she spells it Spoll).

The end result will be a lovelier beach for everyone on the Key. It will just take a little longer and cost  a bit more.

A Lovely Afternoon or Evening
The Longboat Café at Whitney Beach Plaza is joining the Bayou Tavern in having outdoor dining. Both restaurants are located near Bishops bayou, an arm of Sarasota Bay. Nothing can quite compare with a soft breeze caressing your arm while lifting a fork to your mouth or a glass of wine to your lips. An extra attraction is that the Longboat Key Historical Society is just up the street from both restaurants. And the Longboat Key Center for the Arts is just across the bayou, although the better way to get there is just five minutes by car – go north one block on Gulf of Mexico Drive, turn right and follow the signs. Or, to make things even better, turn left and you’ll find yourself at an entrance to the public beach right on the real Gulf of Mexico.