A Lesson in Modern Education

The Florida legislature is considering a proposal that addresses the issue of bullying throughout the state’s public education system. It would require districts to…(choose one):

A …confront allegations of bullying head on by having a teacher, coach or school administrator sit down with the students involved to discover whether the allegations are in fact true and if so, to counsel both individuals in order to resolve any issues between them constructively, thereby imparting a valuable life lesson as to how disagreements can be effectively resolved and how negative consequences can and do follow continued bad behavior, either in the form of detention, suspension or even expulsion.

B …sell tickets with proceeds benefiting the PTA to an after school cage match between the bully and bullied, thereby providing a real life example of the Darwinian principal of ‘survival of the fittest.’

C …encourage the bullied child to run away by letting his or her parents pull him or her out of the school where the bullying took place and then have the district underwrite the cost of that child’s enrollment in a private school of their choosing.

If you answered ‘A’ you – like me – must have grown up in a different time, when teachers actually imparted lessons beyond those found in math, social studies or science textbooks.

If you chose ‘B,’ well, you may want to consider some counseling for yourself (or run for the next opening on the Sarasota School Board where you’re likely to fit right in).

Oh, and one more thing…here’s a news flash: private schools have bullies too, just like almost every other walk of life…

The thing is, you either deal with them once or live with them forever.

A father/daughter dance was canceled on Staten Island recently due to fears transgender children might be offended by the event.

According to the New York Post, the PTA president at the grade school (PS 65) cited the New York City school district’s recently enacted “Transgender and Gender Nonconforming Student Guidelines,” for the cancellation.

No wonder many college campuses have become some of the least tolerant places on the planet for the open, free exchange of thoughts and ideas: our children are being taught as early as grade school the fantasy that it is a constitutional right to progress through life without ever being offended.

Talk about being set up for failure!

Can I Get A Side of Olympics With that Takeout Order? 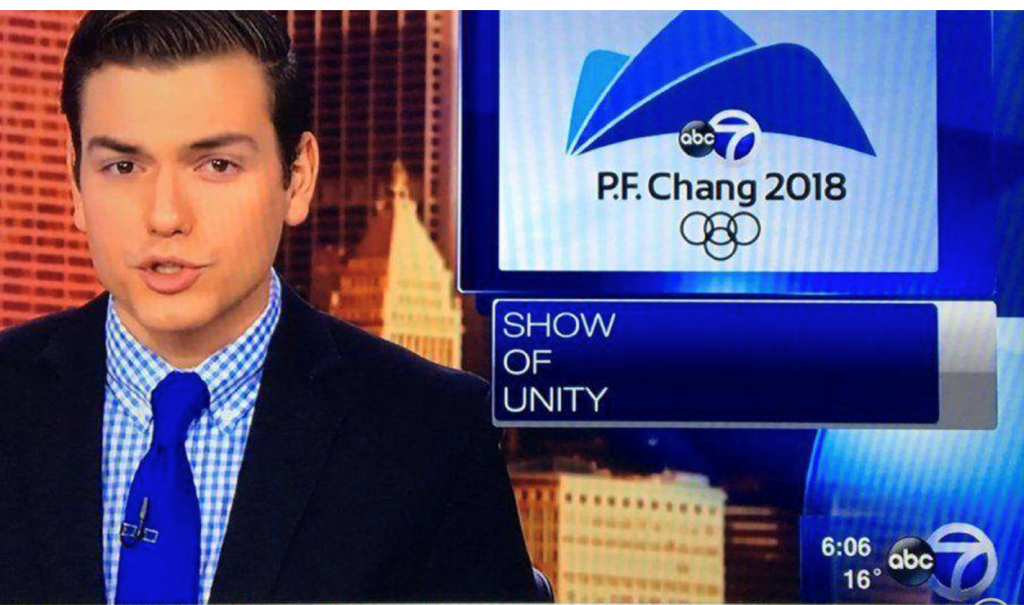 The ABC TV affiliate in Chicago had egg-foo-yung on its lens recently after broadcasting a graphic as part of its winter Olympics coverage that referred to the games as  “P. F. Chang 2018” instead of ”PyeongChang 2018.”

Who knows, maybe the graphics team missed lunch that day…

The take-out order at the Outback Steakhouse in Palm Beach Gardens was for 25 steaks, 25 chickens and 25 potatoes, a moveable feast for a large nearby Christian church. The bill came to $735. And the tip server Tamlyn Yoder, 25, received for assembling, double-checking and delivering the order to the curbside pickup point outside the restaurant came to exactly…zip, zero, zilch, nada.

She bit her tongue, but later, back home, she let her fingers do the talking as she vented over the slight on Facebook. A friend reading her post was especially struck by her story. So much so that he called the church, Christ Fellowship, on her behalf, asking for recompense.

Things went south from there when the Church called the restaurant – perhaps to address their oversight in not leaving a tip? But no matter, when the restaurant learned that a Facebook post was what led to the church being contacted, well that’s when management, citing a policy forbidding any discussion of customers online, fired Yoder for a breach of corporate policy.

The only good news here? She did finally get a tip from members of the church’s congregation who felt bad for her. But her job, well…maybe the church’s parishioners will say a prayer to help her find another.

And as for her friend? Chalk this up as another example of no good deed going unpunished.

For more than a year, hall of fame tackle Warren Sapp has avoided being served as part of a lawsuit filed by a woman who claims she was injured by the former NFL star at a 2015 Super Bowl party.

Process Servers in South Florida have been to Sapp’s beachfront Hollywood Florida condo more than 50 times over the past year without being able to successfully make the document handoff needed for stalled court proceedings in the case to get underway.

But it was a trick play (as creative as the one involving former Venice High QB Trey Burton in the recent Super Bowl where he took a handoff and lofted a TD pass to Eagles QB Nick Foles) that caught the defensive standout flatfooted.

A resourceful process server – posing as a fan – finally sacked the defensive standout at an autograph festival Sapp attended recently near Los Angeles.

To which the server replied, “Here you go Mr. Sapp, you’re being served…” as he completed the handoff.

Elton John announced his retirement recently, but I’m not sure he really means it. You see, after making the announcement he mentioned that it wouldn’t be effective for four years. Oh, and another thing: in the meantime he’s launching a four-year world tour.

Here’s the copy from a Cover Girl ad I saw recently.

Sounds like a prescription for borderline personality disorder to me…