From Jamming the Transmission to Signs of the Times

And the Award for PR Blunder of the Month Goes to…
The Marriott Hotel chain, manager of the Gaylord Opryland Hotel in Nashville for trying to squeeze the last nickel out of its guests. The company was fined $600,000 for jamming the personal Wi-Fi networks of attendees at conferences held at the hotel, making them pay way-high prices to log onto the chain’s own network if they wanted to stay connected to the outside world during the conferences they were attending – a must for many business travelers in this day-and-age.

The FCC leveled the fines after some conference goers complained about the practice.

Kudos to Marriott’s PR staff: You just can’t buy publicity like this.

Ninety Percent of Success is Just Showing up…
When at least one of the candidates for the two city commission seats vacated by Shannon Snyder and Paul Caragiulo balked at cutting short an out-of-town vacation to appear before the remaining commissioners as part of the interview process, I instantly thought of Stan Zimmerman, himself a candidate for one of the vacancies.

If, as Woody Allen once quipped, 90 percent of success in life is just showing up, Zimmerman obviously had the inside track.

The veteran reporter has attended virtually every city commission meeting stretching back years, covering the city for several local publications, including – for a time – this one.

He’s probably been to more of the city hall confabs than even some of those now sitting on the commission; consequently, he already has a working knowledge of the issues facing Sarasota and will therefore require less time coming up to speed on the city’s business than any of the other candidates who were vying for the seats.

Given the controversy over politics playing too large a role in some recent appointments (the county’s school board comes to mind, and even the county commission in the recent past) it’s refreshing to see the decision in this case made on what I consider to be obvious merit.

If Zimmerman works half as hard on the commission as he has as a journalist, the citizens of Sarasota will be well served.

Well Worth a Listen…
Nothing Off-Key about a recent performance by the local band Crossover at the Cortez Clam Factory on a recent Saturday night. The rock/blues quintet covered everything from the Allman Brothers (by way of Elmore James) classic “No Way Out” featuring a pitch perfect cover of local son Dickey Betts’ signature vamp for the song’s rhythm line, performed by the band’s lead guitarist Richard Riley (who has crossed paths with Betts in the past) to a soulful performance of the Aretha Franklin classic R-E-S-P-E-C-T by the group’s front woman, Lena Lemon. Even the late Jerry Wexler, a longtime Siesta resident and Aretha producer at Atlantic Records in the 60s, would have appreciated Lemon’s performance this night.

You can catch this inspired group of talented musicians on December 4th at the Movieville Film Festival at Lakewood Ranch from 5:30-9:00 p.m. and on the 19th at Classics Steak House in Venice.

Closer to home, Lemon and the group’s rhythm guitarist Ken Schwartz will perform as an acoustic duo at the Siesta Key Oyster Bar on December 6th from 2-6 p.m. They will also return to the Cortez Clam Factory on the 10th, also as a duo and on the 27th with the full lineup plugged in.

Why Quoting Shakespeare in Football Should Draw a Flag…
It’s unlikely to end well when a sports commentator tries to interject Shakespeare into their commentary. And so it was on a recent Fox NFL Sunday broadcast as Michael Strahan tried to explain the difficult time the Seattle Seahawks are having defending their super bowl title by quoting a famous line from the play Henry IV, Part II.

Unfortunately, Strahan called an audible on the play, editing the Bard’s “Uneasy lies the head that wears a crown…” down to his own streamlined version of “Heavy is the crown of the King.”

Wasn’t it Shakespeare who also said “brevity is the soul of wit?”

We all have Bad Days…
In one of worst predictions in history, in a 2007 interview, former Microsoft CEO Steve Ballmer said, “There’s no chance that the iPhone is going to get any significant market share. No chance.”

Election Irony
It occurred to me while casting my vote on election day at a local church last month, isn’t it funny how in a nation where the principle of separation of church and state is held sacred so many of us end up casting our ballots in a church? 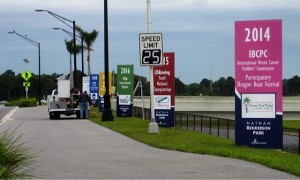 When does the county’s ordinance prohibiting most signs along roadways not apply? Why, when the signs belong to the county, of course (or a quasi-governmental group granted special privileges no private business could hope to enjoy).

We’re talking about the invasive glut of signs that have grown like Kudzu along Honore Avenue near both ends of the rowing lake at Benderson Park. More than 60 such examples proclaim all manner of events the Suncoast Aquatic Nature Center Associates (SANCA) is promoting on behalf of the county (some highlighting events that have already passed, like the dragon boat races held in October, still visible as this is written in late November). There are even large billboards for sponsors on the shoreline of the lake itself, obstructing the view from the western shore.

It reminds me of that stretch of I-95 through the Carolinas where a barrage of signs promote “Pedro” and his kitschy roadside attraction “South of The Border.”

Now if a business exhibited a similar display of bad taste, you can bet the county would be all over it and the signs would quickly be removed. But hey, do as we say, not as we do…

And When Can an Eagles’ Nest Legally Be Moved (in no Time Flat)?
You’ve probably already guessed the answer: When it’s on city land or some other piece of government owned property. That was the case recently when the county and city of Sarasota were able to magically receive permission likity-split from all the necessary governing agencies to remove an eagles’ nest that a pair of the majestic birds had recently built at Ed Smith Stadium in Sarasota.

Now, if you or I had a similar nest on our chimney or elsewhere on our property that we wanted to remove, it would likely take until the next ice age to get a final answer (which in any case would likely be “no”).

For the second time in two weeks, a no-swim advisory has been issued for Siesta Beach. The warning from the Sarasota County Health Department came Thursday, Aug. 11, the result of higher-than-acceptable concentrations of enterococcus bacteria. North Lido Beach and Lido Casino were also on the list. Water activities at all three beaches are not […]