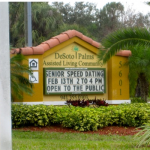 Hey, when you reach a certain age, I guess time is of the essence!

Homeless Center Controversy…
Recommendations that a new homeless center be built north of downtown hit a sour note with district one Commissioner Willie Shaw – who represents the area – in a textbook example of NIMBY-ism. Perhaps Bird Key would be a better choice? But has commissioner Shaw considered that his district is where most of the homeless want to be?…near the bus station, the library, the bay…not to mention in close proximity to the scores of affluent potential victims…err, “clients” of their ongoing panhandling efforts? For better or worse, the homeless find the amenities of Sarasota as rich and varied as the rest of us.

Replied 25+ million victims of the Gulag: “No comment…” (Though it’s likely many were doing a bit of pivoting of their own in their final resting places).

Gulf Oil Spill Update: Check in the Mail?
The owners of Althea’s Restaurant in Venice are still waiting for their check for losses related to 2010’s Gulf Oil Spill, which they say severely cut into their business. Ironically (or not), they say members of their wait staff who worked at the restaurant during the spill have already received their checks. Just thinking out loud here, but if we had a Republican administration, would the situation be reversed?

“Rolling Down Highway 41…”
How annoying is it to be out for a leisurely drive, taking in the sights only to have some impatient lowlife riding your tail? It’s almost as bad as being stuck behind some dawdling tourist at rush hour when you have some place you absolutely have to be…ten minutes ago…

Been There, Done That…
Breathless media reports recently heaped all manner of praise on CVS drugs for announcing they will no longer sell cigarettes and other tobacco products in their stores. Well, Davidson Drugs founder John Davidson adopted that same policy for his area chain all the way back in 2005…Just another example of this area being on the cutting edge of societal trends…What’s next? Will the entire nation soon be sitting down for dinner at 5:00 PM?

Job posting of the day…
“Wanted: One Year Old Teacher-Bradenton, FL.
Learning unlimited is seeking a qualified one year old teacher with a minimum…”
Wonder what the benefit package looks like: free binkies and diapers for life?

Until next time, keep on coasting!

And remember, don’t worry if you stray off-key. We can’t all hit the high notes like Renée Fleming!