So you think you took a hit with your own modest 3 bedroom/2 bath real estate investment during the Great Recession? Consider this: An auction held last month featuring the 5761 acre McCall Ranch near North Port fetched a high bid of just $13.9 million, a far cry from the whopping sum of $61.5 million Brian Tuttle and his backers paid for the property back in 2005 near the peak of the real estate boom.

The property was originally slated for development as the grandly christened “Isles of Athena” project, ironically named for the Greek Goddess of wisdom, industry, and skill. (The irony being that those qualities were seemingly in short supply among the investors involved). Calling again on Greek mythology, perhaps “Isles of Narcissus” would have been a more fitting choice?

And next time (if there is a next time), a visit to the Oracle at Delphi might be in order prior to closing a deal of this size…or closer to home perhaps the Oracle of Omaha, Warren Buffet, could be consulted.

Welcome to Sarasota! Enjoy your visit! 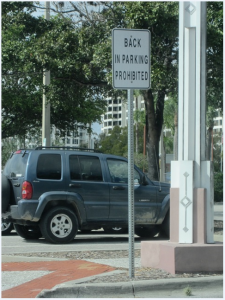 Ever try to unravel the pretzel logic behind those signs posted along the bay front downtown and in other City of Sarasota run parking lots – the ones that prohibit drivers from backing into their chosen spots? One driver ticketed for the offense contacted columnist Tom Lyons at the Herald Tribune recently seeking the reasoning behind the rule. Lyons explained that it’s mainly a matter of convenience…not for drivers mind you. Rather, it’s so police can easily see – or electronically scan – your license plate without having to leave the comfort of their cruisers.

But what about the poor visitor from Ohio whose car is pictured here? The Buckeye State requires plates on both the front and rear of vehicles. No matter. The driver was ticketed anyway. It’s enough to make a cynic (i.e. me) consider that perhaps what this is really about is generating some extra revenue for city coffers.

After all, the city took a big hit on those high-tech parking meters it placed downtown a few years back – you remember, the ones that lasted about 10 minutes before a public outcry led the city to abandon its half million dollar love affair with the gadgets? They tried returning them to the manufacturer, but were offered a mere 10 cents on the dollar.

Red light cameras have worked so well up the road in St. Petersburg that fewer and fewer tickets have been issued over the past year as former signal runners have “seen the light” (so to speak), modifying their behavior to actually stop on red. Imagine that! A good thing, no?

Less tickets has meant less revenue for the city, creating an unanticipated financial burden for local government. So, now – like the parking meters in Sarasota, they will soon be abandoned. Which begs the question, just why were they installed in the first place? For safety? (which with less red-light runners has arguably been enhanced) or for profit (which after an initial flood of revenue has tapered off to a trickle that adds up to less than what it takes to maintain the camera systems)?

I think we all know the answer here.

If only those in government could realize that the same dynamic illustrated here applies to taxes and other “fees” as well: they might generate more revenue early on, but over time, folks modify their behavior to avoid them, causing a drop in economic activity and consequently a corresponding drop in the revenue tied to the now waning activity. As the saying goes: “If you want less of something: tax it!”

Equal Time for Sarasota County…Saving here to Spend there…

You have to love the thought process of those in government, especially when it comes to “saving” money. Case in point: Sarasota County Area Transit, better known as SCAT (…by the way, whose idea was it to name the county’s transportation system after the contents of a litter box)?

Anyway, in order to qualify for a grant to add a coveted new bus route stretching along the University Parkway corridor from the airport to Lakewood Ranch, the county needed to add some matching funding of its own. So according to recent media reports it decided to cut back on “unprofitable” trips along several routes elsewhere to free up some of the needed funds. Routes selected include the 90X and 100X express runs between North Port and Sarasota. According to SCAT, the trips being cut currently serve three or fewer passengers. Which again begs a question: Why haven’t they been cut already?

Even those fancy, high-tech, environmentally friendly, wi-fi equipped  busses the county invested in over the past decade can’t overcome the bad math of transporting two or three people all the way across the county in buses built to accommodate 25-40 passengers. Talk about SUV overkill! These things don’t run on pixie dust, after all. Why don’t we just pay for a taxi for the two or three passengers involved and be done with it…it would be cheaper.

It’s the kind of mindset that makes dealing with the larger issue of our national debt seem so utterly hopeless. What would be common sense to most individuals or families living on a budget is Greek to many of those charged with spending money that is not their own.

Early on in the Obama Administration then Secretary of State Hillary Clinton and the President made much of their plan to “reset” the relationship between the United States and its former cold war rival. Breaking developments in Ukraine have brought about a rare recent success for the administration: those relations have indeed been reset…all the way back to 1952.

A joy ride by a teenage runaway from Arcadia in a stolen truck caused chaos on the Cortez bridge approaching Anna Maria Island recently when the fleeing driver caused 23 wrecks – five of them on the bridge alone – as he tried to escape authorities in hot pursuit. Traffic along Cortez was backed up for hours, or roughly the same length of time it takes to travel Stickney Point Road from US-41 to Siesta Key on a normal day this time of year…

…Okay, maybe it just seems to take that long…but those “No Turns On Red” signs that went up in February at the Midnight Pass Road/Stickney Point Road intersection have made a bad situation even worse. See “Third Time a Charm for Stickney Point/Midnight Pass Intersection?”

Get Ready for Springtime Wines from Puglia